Police say they were pelted with missiles after Primrose Hill brawl 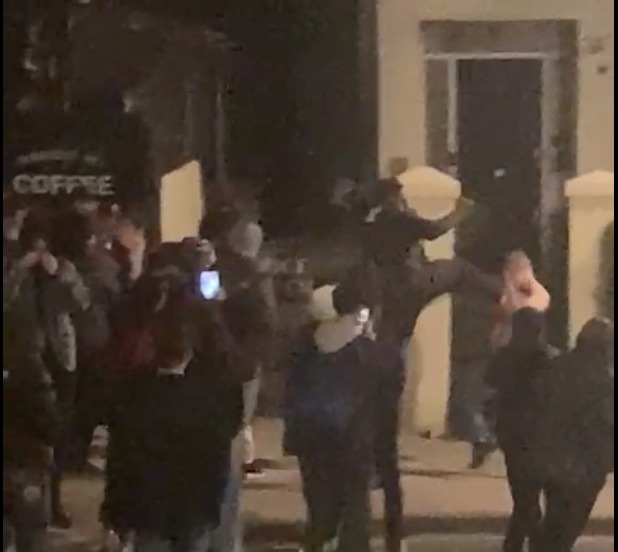 A “KEEP Primrose Hill open” campaign has emerged as the row over whether the park should be gated off continues.

Opponents to the idea say other measures should be considered to deal with regular reports of late-night noise and violence.

Residents have spent weeks complaining that hundreds of people are gathering for parties on the hill, and then later in their streets once they have been moved on by police.

Over the past few weeks, shops have been vandalised, sound systems have been carted through residential streets and the park has been left strewn with rubbish.

On Saturday evening, a street brawl in Bridge Approach – graphic foot­age of which was caught on camera – saw a bare-chested man being kicked on the ground by several attackers after being felled by a flying drop-kick.

Police said that when they were arrived several people through “missiles” at them, cracking their patrol car vehicle.

Police have started clearing the park from 10pm on weekends as an emergency measure but have warned they do not have the operational capacity to do so forever.

New neighbourhoods police chief, Inspector Paul Clarke, called for a more “permanent physical solution” and there have been repeated calls for gates in the park from people living nearby.

An election leafleting campaign by the Conservative Party last week came with the message that there was “no option but to close the park at night”.

The leaflets led to the formation of Facebook group “Keep Primrose Hill Open” and the launch of a change.org petition called “No Gating Primrose Hill”.

Speaking to the New Journal, one of the petition’s authors Amy McKeown said: “The Tory leaflets through our doors lit a fuse. I think many of us knew there were problems with the park but we hadn’t realised how distressing it had been for those living close by until we spoke to some of those residents.”

She added: “There’s no doubt there’s an anti-social behaviour issue at the moment, exacerbated by lockdown and a stand-off between the Royal Parks and the police, but we want to find a way of solving this without closing the park permanently overnight.”

The petition includes alternative options such as “wardens and better policing, fines for music and littering, proper enforcement of park rules, and temporary toilets”.

Ms McKeown also suggested keeping the other Royal Parks open, all of which are closed at night apart from Primrose Hill, so that people do not flock en masse to one park.

“Many of us agree that there should be some sort of circuit breaker over the summer with the park temporarily being closed early to stop the cycle of parties, and Royal Parks need to step up and police need to deal with the violence and drug dealing,” she said.

“Ultimately, everybody wants the same thing, which is a safe park, so we need to work together as a community.”

Lucy Cottrell, who lives near to the park, said: “We’re very worried about the summer we’re about to have and emergency measures are definitely needed. Officers said they cleared around 400 people off the hill on Saturday night, and given the scenes we saw afterward I think some thought needs to be given to how crowds are dispersed.”

Holborn and St Pancras MP and Labour Party leader Sir Keir Starmer has asked the Royal Parks, including manager Nick Biddle, for a meeting to discuss a future strategy for the park.

A police spokesperson said: “At approximately 22:30hrs on May 8 police were called to a disturbance involving several young males fighting near Bridge Approach Primrose Hill. On arrival no victim made themselves known to officers with the large crowd dispersing immediately on sight of police. As the individuals that were present ran, several threw missiles at the police vehicle, one of which made contact with the vehicle windscreen cracking it in the process.

Police were unable to identify a suspect due to the volume of people in the vicinity however the vehicle has now had to be taken out of service until it can be repaired.”