Special bundle aims to support families during the summer months 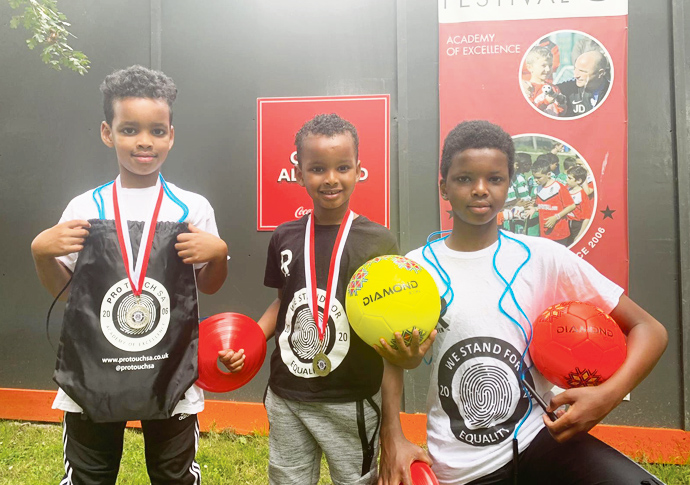 Yonis and Yacub Ali, aged 7 and 6, and Yasin Sherif, 13 – the three brothers are among more than 250 children who will receive free sports bags from Pro Touch SA

SCORES of youngsters from Camden, Islington and Westminster can look forward to an action-packed summer after receiving free sports equipment goodie bags.

In a bid to help tackle mental health issues caused by the coronavirus outbreak, coaches from Pro Touch SA have put together their very own sports bundle.

They are now busy delivering more than 250 sports starter packs, which include a football, training cones, a skipping rope, a drinks bottle, a notepad and pen, and even a medal.

There is also a “We Stand for Equality” T-shirt to “celebrate the diversity in the communities” that Pro Touch work within.

Explaining why they put the sports bags together, Pro Touch founder Ash Rahman said: “We felt it was really important to support young people and their families during this pandemic.

“We’ve seen and heard a lot about people delivering food parcels, which has been unbelievable – communities have been doing such a fantastic job and showed a real togetherness.

“To try and do our bit we thought it would be a good idea to encourage kids to get their daily exercise, and also help parents by supporting them in finding activities for their children.

“So, with the help of funding from local councils and various charities, plus donations in the way of equipment, we put together the sports bags. We also added a notepad and pen and a medal so families could organise their own little competitions.” 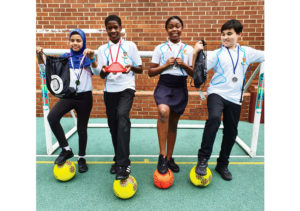 Pro Touch was originally launched as an elite football academy back in 2006, but has since evolved. It now also runs a wide range of multi-sports schemes across the capital, the majority of which are delivered for free.

Like a number of local sports clubs they have also been hosting free daily online activities to help lift the boredom of lockdown and anxieties brought about by the new social-distancing measures.

Ash added: “There is a real concern about the mental health issues that will arise after dealing with this pandemic.

“We’re trying our best to keep young people engaged by providing daily exercise classes online, and also by running [online] quizzes and drop-in sessions for children who just want to chat to each other and have banter.”

Yasin Sherif, 13, who received a bag along with his brothers Yonis Ali, seven, and Yacub Ali, six, said they are now all looking forward to having a kick-about on the green space where they live in Chalk Farm.

He added: “The equipment will really benefit us, and make us feel fitter and improve our skills. We didn’t have any goals, so now we can use the cones instead.”

Pro Touch have also dropped some bags off at a number schools, including Holy Trinity & St Silas Primary in Chalk Farm.

Their PE teacher, Stephen O’Brennan, said: “We would like to say a huge thank you to Pro Touch for providing these amazing free sports packs for some of our pupils.

“The children were extremely happy when they received them and started expressing straight away some great ideas of how they were going to use the equipment in the summer holidays.

“These packs will really benefit these children, mainly by keeping them physically active.”