Awate, who grew up on Camden's Maiden Lane Estate, talks rap, gentrification and why he is finally set to release his debut album, Happiness

IT drove me insane, insaaaane!” Camden rapper Awate has been biding his time, waiting until the conditions were right to release his debut album, Happiness, even though it has been finished for four years.

Awate, who grew up on the Maiden Lane Estate, and launches his album at Roundhouse Rising tonight (Thursday) with support from Kingpin and Kai Jones, has learned the meaning of patience ever since he played Happiness to fellow musicians back in 2014.

“I sent it to people like Pharoahe Monch, who is one of my mentors, one of the greatest rappers ever, and he found it incredible. He told me things that made me think, ‘OK this is the project, maybe I should wait and build a buzz and make another project in between (Shine Ancient)’.

“So those are the things that made me think it would be well received and worth putting four years of my life into having a life plan – to come out of anxiety, depression and PTSD from the police cases and somehow pay rent. I’ve had maybe 14 different jobs in that time – I’ve been a waiter, flyering, promos for an arts company, teacher, youth worker, telemarketing, surveying, lecturing, just doing a lot and touring as a musician.” 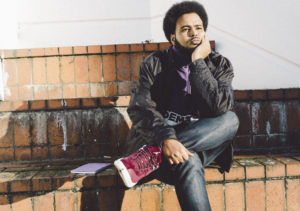 Awate hasn’t had things easy. A refugee who came to Camden from Eritrea, he took on the police in the courts following a number of arrests while writing his album.

“I was unlawfully arrested on four occasions, within the space of two years, a lot of time by the same police officers,” he said.

“Three cases were thrown out for lack of evidence and the last one I was convicted for and I won on appeal – the judge took over questioning because of inconsistencies of the police and that got thrown out because it was ridiculous.”

He has since put his arrests down to the gentrification of his neighbourhood.

Awate said: “The first arrest happened in March 2013 and occurred on Maiden Lane. I lived in Maiden Lane for 19 years and it was my home. It was a place the police did not go. We were completely neglected in terms of infrastructure, maintenance and repairs, especially at that point the youth centre had been cut for three years and everything was left to become decrepit.

“At that time, I didn’t think of it as the reason but later I realised it was because of the gentrification of the area – Google had moved in, the Guardian, Central St Martins, Granary Square, an urban nest and cooperative now on Camley Street. There are so many new developments, so many white people, so many new middle-class people that need to be protected by these police that that’s the reason why they were in the estate and they’d never been there for the past 20 years. So that felt like it was pushing me out as well as the tide of gentrification, in terms of the prices of things increasing and a lot of my friends had moved whether it was uni or because they had been priced out of the area as well.

“Each time I moved it was Zone 2 again and then now I’m in Zone 3, so each time I think my generation are going to be sent another zone out of London and we’re going to end up in Stoke.”

The experience of being arrested affected him dramatically and fed into his album, which he wrote with the words of Yasiin Bey (Mos Def) in his ears.

Awate said: “Mos Def, who is one of my heroes, when he talks about his first album, Black On Both Sides, wanted to make something that captured who he was, so if he passed away or if he never makes music ever again, it’d have his values and his favourite things, the most powerful things people said to him in there, a holistic capturing of who he was.”

Now, the time is right for him to release Happiness, a retro hip-hop album with lyrics that reflect his outspoken ways, his drive for fairness and his experiences in Camden. 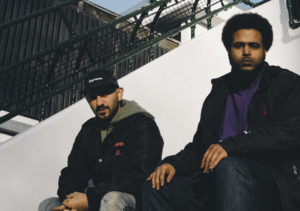 Awate said: “I couldn’t have an album that sounded like contemporary music because I don’t listen to it. I’m from Camden, which is a place where memories and sub-genres of the past still exist and people are still stuck in them to some extent, so you still have the psychedelic era and the mods and punks and people from the ska scene, people that still think it’s the 80s and New Romantics, or still think it’s the grunge scene in the 90s, or jungle and dubstep or the 2000 indie music scene.

“People are just stuck in them, in their fashion, the way they talk, in the art and the bohemian nature of Camden, these memories are just physical and embodied in it, so in that sense I needed to make something that sounded like memories and sounded like the place I was from but also ethnically the melodies needed to be psychedelic and pentatonic because I’m from East Africa.”

On track Jewels, about his arrests, Awate says: “I romanticise everything in Camden – poor, young and still an artist.” He explains: “That was based on everything that was happening to me at the time…I was walking around knowing I was on bail, that I had court and trials coming up, not know what would happen in my future, not knowing if I’d be able to teach or have a job again or if I’d literally be incarcerated, so I was telling myself you’re the greatest writer since William Shakespeare, telling myself these things to maintain creativity and mental health, to some extent, doing things that were not necessarily the best to deal with mental health like building up my narcissistic personality disorder to stop myself from going mad and not having the motivation to doing anything, that’s the ‘romanticise everything’.”

Although he is still sentimental about his life in Camden, Awate has since moved away, in part due to the associations with his arrests, and he tries to keep his distance from police.

He added: “I stay away when I see them because of the PTSD. I couldn’t see high-vis without getting a panic attack but now I’m OK. Emotionally I was moving away from a ­geo­tagged bit of trauma that was right next to where I grew up in the house I was still living in, so I needed to move away from that. But I miss it, I miss Camden, I miss the community being in a council estate, the architecture so much.

“I don’t like these houses, I want brutalism, I want art deco buildings, I want the Camden style.”

Awate has made just three minor changes to the album since it was completed in 2014.

He said: “One, people would be able to tell, one we had to make out of necessity, but it doesn’t change any of the mood or anything, I did not add a word, the other changes were in the mix, turning things downs but mostly turning the vocals up because at the time when I made the album, all I was listening to for two-and-a-half years was the Stone Roses.

“I wanted my vocals so low in the mix. Why do rappers put their vocals so high in the mix? I wanted to be in the music and I think it’s really important to sacrifice your ego and yourself for the song so (producer) Turkish would give me these amazing productions and I would pick the ones that I thought were amazing songs on their own, and then I had to try not to ruin it but still say something – because of my mental state at the time with the police cases I’d become a lot more different as a person, more withdrawn and more quiet and I think listening to it now, the songs which portray a less confident version have the vocals a lot lower. Even on Shine Ancient the song Uncontrollable Dopeness, which is about the arrests, and the court cases, my vocals are really low.

“But when we wanted to put the album out recently we went back. I just didn’t want anyone to complain, basically, so I sacrificed some of my idiosyncratic artistic dogmas for people’s enjoyment, which is something that I’m not that pissed off about – people need to hear the lyrics.”

Awate, a Roundhouse Resident artist, is due to launch Happiness at Roundhouse Rising tonight (Thursday).

He said: “There are going to be two incredible support acts in Kingpin, who is a veteran of the UK hip-hop scene, a really talented MC and quite an energetic performer, and Kai Jones, who is an incredible songwriter and soulful rapper who is quite intricate and I think the balance of them two would work really well and my friend The Last Skeptik…he’s doing a DJ set.”

Awate extended his thanks to certain staff at his former schools for their support.

He added: “Thank you to Rose, Mr Mohamed, Mr Stokes and Mr Rosen at Acland Burghley School, and Amanda Rickwood at Brecknock Primary School, because they were integral in me not being expelled from primary and secondary school.”