"If people call it ‘gay month’ I have an epileptic fit" 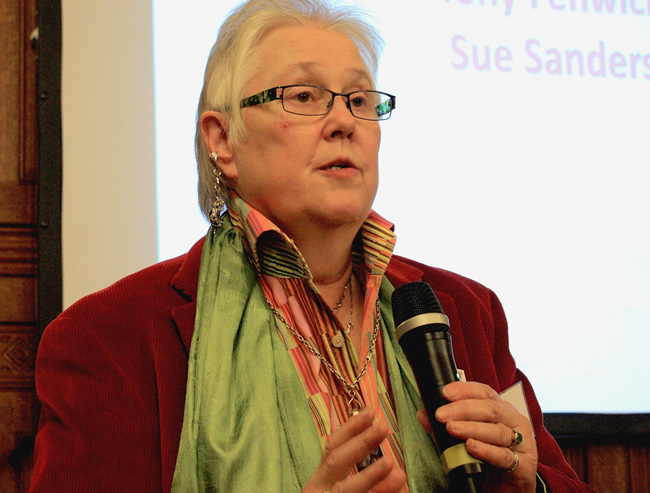 Rainbow flags are being raised this February in recognition of LGBT+ History Month, celebrating the diversity of lesbian, gay, bisexual and transgender history.

LGBT+ History Month was founded in the UK in 2004 by Sue Sanders and Paul Patrick.

“Given that schools had already been doing Black History Month, we thought maybe we should launch a LGBT+ History Month,” says Ms Sanders. “Schools were not mentioning LGBT+ people at all and homophobia in schools was rife. So it was about celebrating after years of being victims.”

This year will see events taking place across the country marking the occasion and will focus on the theme of poetry, prose and plays.

Ms Sanders, who writes her own poetry and short stories, says she is inspired by EM Forster and Dawn Langley Simmons.

She trained as a drama teacher and has taught in schools and universities in the UK and Australia. She has run theatres, directed plays and published work on equality, assertiveness and tackling homophobia.

The new LGBT+ website has an interactive calendar for people to add their events, as well as lesson plans helping schools “usualise” LGBT+ issues in lessons – a term Ms Sanders prefers over “normalise”.

“I was in a school the other day and when I said Shakespeare was bisexual, they had no concept of it,” said Ms Sanders. “It had just been hidden from them.”

Progress has been made since laws, such as the anti- discrimination Equality Act in 2010, and compulsory sex education were introduced, she says.

But Ms Sanders – who was commended in 2012 for work improving police services for LGBT+ Londoners – is concerned about the rise of hate crime.

She said: “The rise of homophobic crime has been profound. What is worrying is the detection of
those crimes are low. It

might be because the victims don’t want to pursue it. It is certainly because the police don’t have the resources they used to.”

Ms Sanders was instrumental in setting up the first LGBT Independent Advisory Group to Scotland Yard in 2000.

She added: “The mission is to make Sue clear that LGBT+ Sanders people are diverse. If people call it ‘gay month’ I have an epileptic fit. We work very hard to show diversity but in the main, white gay men’s rights are the most advanced.

“Our work is not finished. Our intention is for it to not be necessary.”

For more information go to https://lgbtplushistorymonth.co.uk/