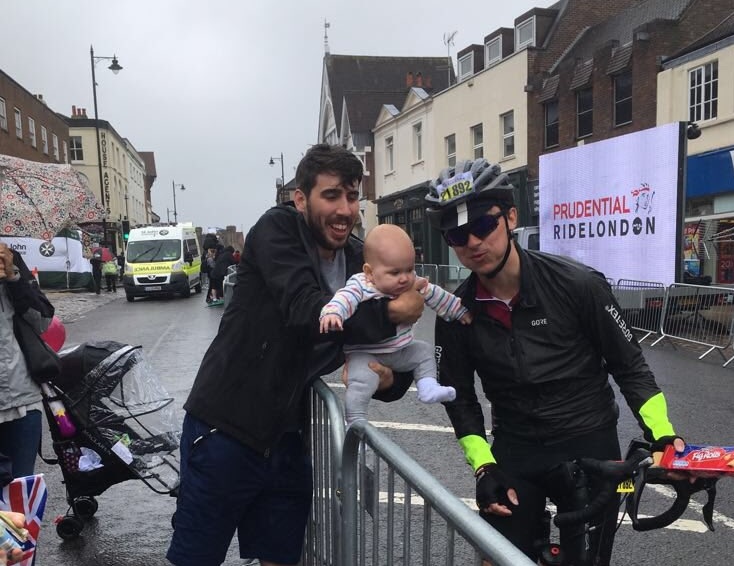 James Yarde on his bike, cheered on by brother-in-law Chris and niece Bea

WHILE the cycling world’s eyes may have been on the Champs-Élysées and the conclusion of the Tour de France on Sunday, a former councillor was taking on a gruelling bike challenge of his own.

James Yarde spent seven-and-a-half hours in the saddle – often during pouring rain – as he took on the RideLondon 100 event. He agreed to take part in the ride from London to Surrey and back – including the infamous Box Hill climb – to raise money for Tommy’s charity, which undertakes research into miscarriage, stillbirths and baby deaths.

Mr Yarde, 26, a former Labour councillor in West Hampstead who now lives in Tufnell Park, was still a politician at the Town Hall when his family suffered the tragic loss of his niece, Amelia, just a few hours after she was born prematurely in February 2017. “Her loss has had a devastating effect on my family,” he said. “We can treasure the time that we had with her and be assured that all she ever knew was love. She will, however, forever be missed.” 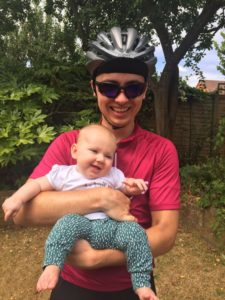 Mr Yarde added: “Tommy’s do wonderful work funding research. One in four women loses a baby during pregnancy and birth.” He said the charity’s preterm surveillance clinic had helped his sister, Anna Tanton, during her second pregnancy this year, and the birth of Beatrice. He is pictured with his niece on page 1 and above also with his brother-in-law Chris. Bea was born in February at St Thomas’s, where Tommy’s was founded.

As the New Journal went to press, he had smashed through his sponsorship target, raising more than £2,000. Mr Yarde said the secret to powering through the ride was partly fig rolls. “They were far from ideal conditions but I’m pleased to have made it round safely,” he said. “I think I had about half an hour of sunshine. The squelch of my socks as I pedalled tells the whole story.”

He said figures from across Camden’s political scene had helped with generous donations.

To add a donation, go to Mr Yarde’s fundraising page at uk.virginmoneygiving.com/JamesYarde