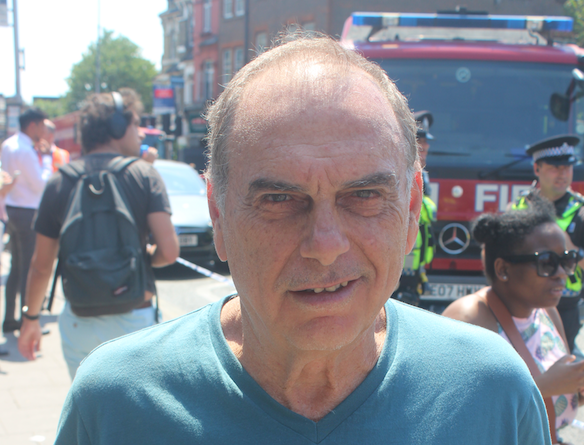 FORMER Chelsea and West Ham United manager Avram Grant has told how he ran from the scene of a major blaze in West Hampstead today (Tuesday).

He told the New Journal: “I was watching from my balcony. I could see the fire spreading, very quickly up the building. There was really a lot of smoke coming from the building. I could hear shouting and so I just ran.”

Mr Grant, 63, who managed Chelsea in the 2007/08 season during which the club reached the Champions League final, lives in the penthouse of a block opposite the burning building.

He added that he loved living in West Hampstead, and was a regular at the Marks and Spencer which opened in the Ballymore development last year. 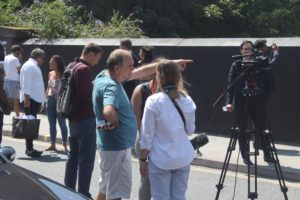 Avram Grant points to the damage at the Ballymore development

James Lovett, who lives opposite Mr Grant, said: “I could see how bad the fire was and I could see Avram standing up there on his balcony. He was on the phone and I was shouting at him: Avram! Avram! You need to get out of there!”

He joked: “I’m a Spurs fan, but some things are more important than football.”

The New Journal reported earlier how the fire had taken hold in the Orwell block of the Ballymore development near West End Lane. 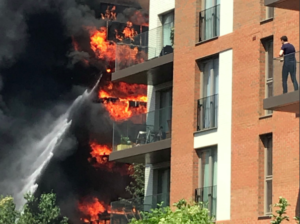 Firefighters tackle the blaze in the Orwell block

Ballymore said in an update this afternoon (Tuesday): “We can confirm today’s fire at West Hampstead Square has been put out, with no reported injuries. Residents’ safety is our top priority, we’re working closely with them & emergency services to ensure their security and temporary accommodation.”