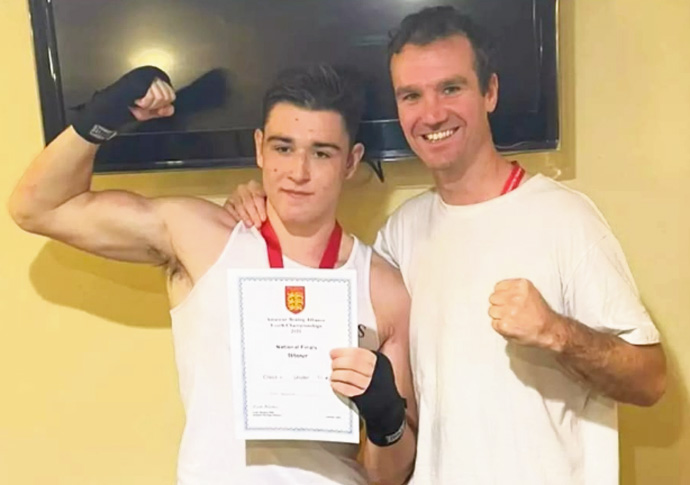 Tom Watson after his win, with trainer Colin Wilson

HAVING waited ages to return to the boxing ring following the pandemic, Tom Watson didn’t exactly hang around when he got there.

The hard-hitting heavyweight prospect stopped Tommy Green from Epping ABC in the first round of his latest bout to win the National Youth Alliance title.

Held at Hayes Working Men’s Club earlier this month, Watson, who boxes for Times ABC, dropped Green within 10 seconds of the opening bell.

Inside a minute the contest was officially waved off by the referee to hand Watson his third knockout victory in the amateur ranks.

Summing up his latest win, the 17-year-old, who was competing at 91kg, simply said: “I wanted it to have lasted longer.”

And his trainer and former St Pancras ABC boxer, Colin Wilson, added: “Tom has got some real power behind him.

“He’s made a good start to his amateur career, winning three and losing one of his four fights so far.

“He is definitely one to watch out for.”

Times ABC in Tiber Gardens – which is on the border between Camden and Islington – is now officially back open following the pandemic.