These days, Fitzrovia is perceived as a comfortable, affluent area. But, says Mike Pentelow, it was once home to a wide variety of revolutionaries 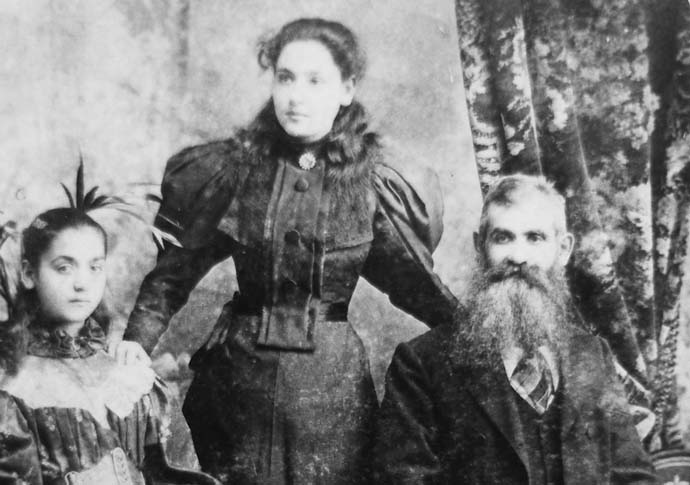 Gershon Simkovitch (later Harris), the author’s great-grandfather and two of his six children

THE diversity of Fitzrovia, including the wide range of radicals who have their own chapter, is colourfully illustrated in a new book, Fitzrovia.

This was the Fairyland arcade at number 92, where the shooting gallery was upstairs.

It was here that a UCL engineering student from Gower Street called Madan Lal Dhingra and other Indian nationalists went two or three times a week.

In July 1909, he shot and killed one of the British rulers of India, Sir William Wyllie, and accidentally a doctor who was nearby.

The assassin then tried to shoot himself but had unknowingly put the safety catch on the gun. It was believed the gun had been supplied by French anarchists (of whom there were many in the area).

At his trial he made no attempt to save himself, saying he intended to kill Wyllie as the only way British rule in India could be overthrown was by violence. Indians, of course, had no vote in those days.

He maintained an air of indifference in the dock even when being condemned to death. The famous executioner Henry Albert Pierrepoint hanged him.

The Fairyland’s shooting gallery was used just two months later by suffragettes, using a Browning pistol, who were thought to be planning to shoot the Liberal prime minister Herbert Asquith because he opposed votes for women. A friend of his sister-in-law, Mrs Moore of the Women’s Freedom League, tipped off the police, who confirmed the suffragettes had been firing at the gallery, but no assassination attempt followed.

The gallery advertised itself as the home of “London’s Premier Revolver Gunshooting.”

By 1920 there were four of these galleries in Tottenham Court Road, which had many amusement slot machines including peep shows and one that claimed to supply a picture of one’s future wife.

The aforementioned French anarchists in the late 19th century had their own club, the Autonomie, at 6 Windmill Street, and one of its members Louise Michel, who lived at 59 Charlotte Street, ran an international anarchist school at 19 Fitzroy Street. French anarchists also met in the White Hart pub at 9 [later renumbered 20] Windmill Street, and Grafton Hall at 55 Grafton Way. Louise Michel also addressed an international revolutionary socialist congress at 41 Rathbone Street in 1881 when it was called Upper Rathbone Street.

The book’s subtitle , The Other Side of Oxford Street, is to distinguish it from its southern neighbour Soho, but the book also mentions its northern neighbour St Pancras, the other side of Euston Road.

St Pancras Communist Party member Ellena Burns, for example, was active in the general strike of 1926, arranging support for the wives of strikers. Her husband, Emile, wrote a history of the strike.

On its 50th anniversary, in May 1976, Ellena recalled it in the Camden Journal. “We discussed how women could go about influencing events,” she stated. “I think the general strike was the first time we in the Communist Party were able to get women involved in political discussions.”

In the 1930s German fascists used to meet in Schmidt’s restaurant at 33-37 Charlotte Street, and just out of the area Lady Macgill ran the women’s section of the British Union of Fascists at 233 Regent Street (near Oxford Circus).

The book also examines the contribution made by immigrants from France, Italy, Germany, Cyprus, eastern Europe, and Asia.

The author’s great grandparents came from Belarus in 1895 and worked in the clothing industry in the area.

Other industries that thrived included furniture, restaurants and entertainment.

An interesting chapter on healthcare provision for the period contrasts that provided in the more prosperous St Marylebone borough (western Fitzrovia) and St Pancras (eastern Fitzrovia).

The latter (now part of Camden) had a much better health record because it provided services directly, than the former (now part of Westminster) which relied more on charities.