THE start could have been sensitive, but now France have been ousted from the European Football Championship, the Estorick Collection of Modern Italian Art should have a smoother ride with their new exhibition.

For presented as a “chairman’s choice” Olivier Debré: Fervent Abstraction* features 30 oils and works on paper and 16 large-scale paintings by the French artist who died in 1999 at the age of 79.

Michael Estorick, chairman of the Estorick Foundation and son of Eric and Salome Estorick, whose collection is housed in the museum in Canonbury Square, said: “Debré was a wonderful painter – enormously prolific but also remarkably consistent in quality, he is highly regarded throughout the world, yet remains almost unknown in the UK.

“My parents’ taste for French 20th-century art, of which they owned a great deal, means that I believe this exhibition will not be out of place at the Estorick Collection. Debré is an artist who needs to be seen now, not least in the context of the Covid pandemic and of Brexit, which while often making the world feel smaller, also threatens cultural ties with continental Europe.”

In a short film Debré specifically acknowledges the influence on his work of Mondrian, Kandinsky, and Picasso (whom he met in 1941), and later Matisse. Well connected and well travelled, he also encountered Rothko and Rauschenberg in America.

“Painting has the advantage of being a universal language”, he noted. But then he did so much more in a wide-ranging career.

For example, he made the group of four red steel elements, up to 18 metres for the Eurotunnel entrance at Calais. 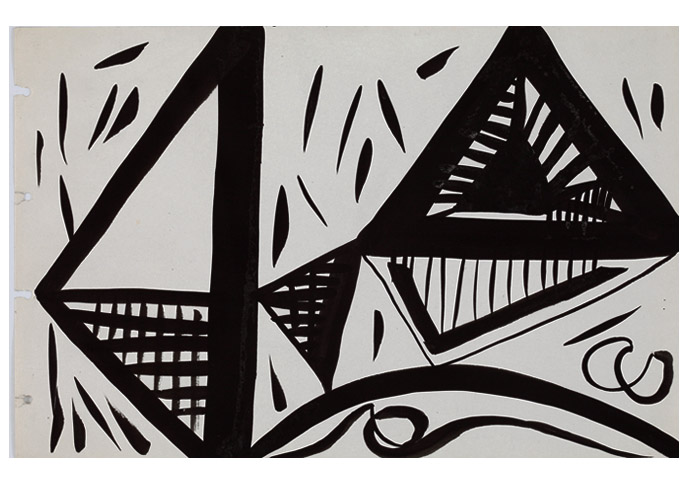 Montreal’s 350th anniversary, he sculpted the granite Mémorial du Général de Gaulle, a gift from Paris. And in the 1980s Debré – younger brother to Michel who was French premier under de Gaulle – received commissions from Hong Kong Opera and the Opera House of Shanghai, as well as creating ballet sets. There were stained glass commissions too.

The Estorick describes Debré as “one of the key representatives of lyrical abstraction” which became dominant in post-war Paris. He would later use intense and vivid colours which “would come to define his style”.

“Debré’s ambition was to express the emotions he experienced in relation to natural phenomena such as storms, typhoons and rivers (particularly the Loire) using strong accents of colour over fluid, vibrant back­grounds – he characterised his work as ‘fervent abstraction’”.

Born in Paris, his early childhood was spent both there and in the Loire valley, and he drew, painted, and sculpted from an early age, later studying architecture and history at the École des Beaux-Arts and the Sorbonne.

He also exhibited widely. Yet in the UK the only major show was in 1977 at the National Museum of Wales (an oil inspired by St David’s cathedral characterises the delicacy and subtleties in so many of the works).

Displayed, too, are small Indian ink works on paper from the 1940s; small oils from the 1950s; and a number of larger Signes personages, Indian inks from the 1980s. We also get some feel for the development of his oils from his relatively modest Tout bleu from 1962 at 150cm to his Longue ocre rose coulé taches vertes, from the mid-1980s, at more than 3.8metres.

In a show catalogue, art historian Fanny Drugeon quotes Debré: “…a painting, however far removed from what it is agreed to call the representation of the world, remains an image of it, and the discussion between figurative art and abstract is unnecessary”.

The paintings, “are defined by an architecture, a construction by colour planes in thick layers.”

Debré wanted to stress how surroundings act upon us and said: “…you are in a painting as you are in a landscape”.

Perhaps this is one reason his works tended not to get smaller over time.

• The exhibition* runs until September 26. 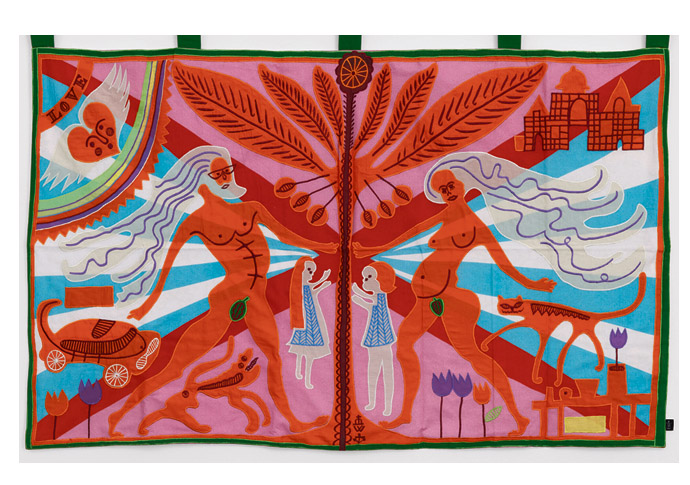 THE Koestler Trust, the leading UK prison arts charity, this week thanked Royal Academician Grayson Perry “…for championing creativity for all and bringing hope to some of society’s most marginalised people”.

“We are completely blown away that Grayson Perry, one of the country’s leading artists, has chosen to donate the proceeds of Marriage Flag in support of artists in the criminal justice system,” they said. The artist is backing the charity through the Artists Support project which sees new works offered each week. Other RAs taking part include Michael Craig-Martin, for example, who is supporting the Centrepoint charity working with homeless and you people; and Anish Kapoor RA is backing human rights charity, The Helen Bamber Foundation.

The 2021 Koestler Awards entries, numbered in their thousands, have now been gathered in and are awaiting judging. In the meantime the trust are putting together a new poetry anthology and, this week, a new follow-up exhibition of works curated by young people from Sheffield Youth Justice Service. Koestler say: “Many of the artworks from the My Path exhibitions in Sheffield and Ripon are for sale through our online shop, with prices ranging from £40 to £500. The money raised from artwork sales is split between the artist, the charity Victim Support, and the cost of running the Koestler Awards”.