George Weiss was often an independent candidate at elections in Camden 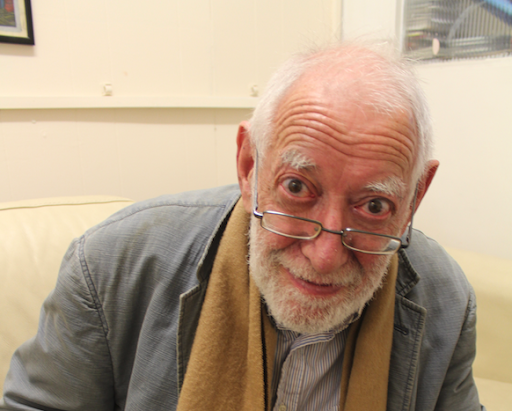 THE optimistic mystic George Weiss was one of Hampstead’s more upbeat and baffling characters who focused his life on utopian horizons.

Better known as Rainbow George, he contested several elections as an independent candidate often armed with a manifesto calling for an end to borders and political parties.

He has died this week aged 81.

Mr Weiss, who was a regular caller to the New Journal’s offices, was perhaps best remembered for his late night radio phone-ins where he would extol the virtues of his Rainbow world order.

Sometimes dismissed as “loony George”, he believed in a future where an Artificial Intelligence being could “play the role of a truly loving god” and money would be  replaced by a kind of universal income he called The Wonder.

In one of his final radio interviews this year, he explained for one last time: “That truly loving god would have a bank of a zillion Wonders to look after everybody – it’s not complicated. We could sustain a virtual paradise. We could create a situation when there is always enough money to cover what needs to be done.”

Mr Weiss moved into Perrin’s Walk in 1969 where he became friends with his neighbour, the actor Peter Cook.

After a spell away in the late 1980s, Mr Weiss returned to his home to find the roof caved in and his possessions wrecked.

He demanded compensation and a major roof repair but never heard from the owner again.

In 2004, he applied to the courts for squatters rights and won ownership, later selling the house for £710,000.

But he squandered most of his fortune on bizarre projects including chartering an aeroplane to play a rock concert, launching a referendum to rename Belfast “Best City” after the footballer George Best and hiring the Camden Palace for a concert that was free to get in but £1 to leave.

In 2019, he came into our offices with a plan to resurrect his Rainbow Wonder Party in the Brexit crisis.

It wanted to establish a new European Union “that has no countries to support or governments to obey” and was “peaceful, harmonious, leisure-oriented and poverty-free”.

Mr Weiss had originally got the idea to start the Wonder Party after the IRA bombing of the Grand Hotel in Brighton in 1984.

His Captain Rainbow’s Universal Party had over the years several unsuccessful election forays, including a “Rainbow Alliance” with Lord Sutch of the Monster Raving Loony Party.

In August 1989, he caught up in a tabloid sting in what was then the Swiss Cottage Holiday Inn where he was filmed exchanging 100 tabs of LSD for £150.

He was described as “the master pusher behind the acid house craze” in the News of the World, to his great amusement.

In 1991, he found the Vote For Yourself Rainbow Dream Ticket party that stood in the Euro elections in 1994. He also polled eleven votes in Brent East and five votes in a 1988 Kensington by-election.

His last run for parliament was against Labour MP Tulip Siddiq and  the other candidates in Hampstead and Kilburn at the 2017 general election.

Sebastian Wocker, editor of the Hampstead Village Voice magazine, said: “All his egalitarian ideas, it was really the seeds of what is now called and universal income. He wanted to everyone to be ok and no one to want for anything. But the way he went about it was too eccentric to cut any cheese with anyone.

“I met him just a couple of weeks ago. I took a picture of him outside the Coffee Cup, it was probably the last photo ever taken of him.”

Mr Wocker added: “He wasn’t someone you took that seriously, politically. But I took him seriously as a friend. He was an integral part of Hampstead for years and years and he was a lovely man. John Lennon’s Imagine was his real thing. He wanted a world with no money, no boundaries, no borders – a world of wonders as he called it.”