Farewell to Bert Rossi, gangland boss ‘who was one of us’

Funeral of a ‘Little Italy’ legend, an associate of the Kray Twins and a link with a Clerkenwell that was a tough working-class area ruled by mobsters 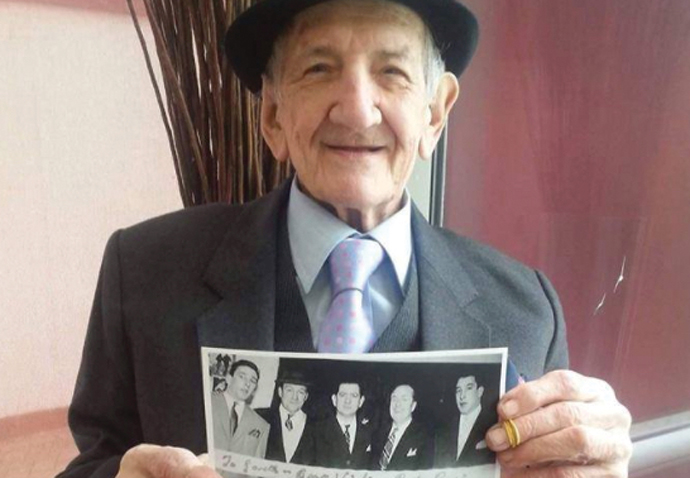 ‘A survivor not a gangster’: Bert with a photograph taken with the Krays

THE soundtrack of gangster films The Godfather and Once Upon a Time in America rang out at St Peter’s Italian Church in Clerkenwell on Monday as mourners said farewell to Bert “Battles” Rossi, one of Britain’s oldest gangland bosses who helped the Mafia come to the UK and was an advisor to the notorious Kray Twins.

Born in Clerkenwell as Roberto Alberto Rossi in 1922 to Italian immigrants who moved to what is known as “Little Italy” after World War I, Mr Rossi lived in Islington all his life, most recently in Colebrooke Row, Angel.

Bert, third from right, with his Clerkenwell gang

Known as “The General of Clerkenwell”, he died last month aged 94 – marking the end of an era for what was once a tough working-class district ruled by mobsters but is now one of London’s most desirable postcodes.

Dozens of family members, friends and former associates, most of them elderly, attended the service led by Father Guiseppe. There was no eulogy. But after the service, mourners swapped stories of the man they knew as Bert, “Battles” – he was a feared streetfighter – or “Bananas”, a reference to his massive fingers.

Aldo, a childhood friend who took part in the service, said: “He was a pal, a good friend. He was great. We used to [release] the doves together [at the annual Italian] procession. We put a bowl of flowers outside, and when they brought [the float with] Her Lady [Mary] underneath we used to open it [a cage] and they’d fly out.

“He was a nice guy, to me he was. You know, he had to be how he was, with who he was and where he was but other than that, he was one of us. Italian community. We were old pals and we grew up together from the 40s.” 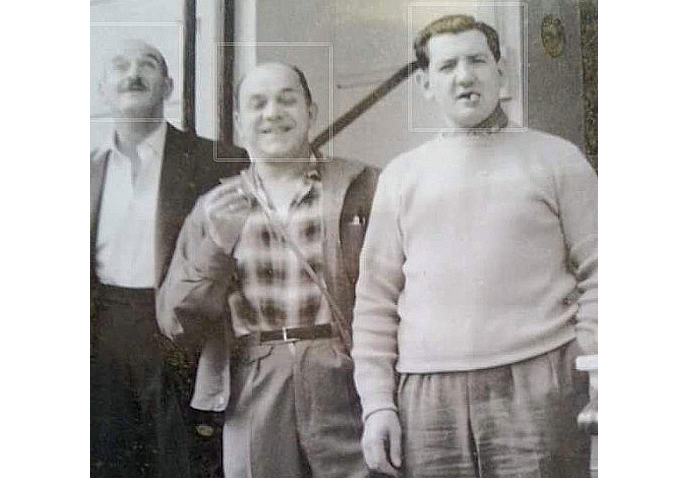 Bert with Abe Koski and Lou

As German bombs rained down on London during the Blitz, Mr Rossi got a job as a demolition worker. Aldo said that after his pal’s death he was now the only living Italian remaining from his area of Clerkenwell.

Born in Saffron Hill, Mr Rossi worked as a driver for gangster “Harryboy” Sabini. He was also close to gangster Bert Marsh, who had changed his name from Pasqualino Papa.

He later dealt cocaine – but would never touch heroin – and ran clubs in Soho, working for gang leader Billy Hill, and with Albert Dimes, another Clerkenwell Italian mobster, running gambling and snooker halls.

Mr Rossi married Rene, an Englishwoman, now dead, and the couple had two children, Peter, who has also died, and Irene.

He was jailed, along with “Mad” Frankie Fraser, in 1956 for attacking Soho gang leader Jack “Spot” Comer. In prison he met Ronnie Kray, who he scorned for “wanting the limelight” but nevertheless mentored.

One day in the 1960s he met a man with links to the US Mafia, and became close to prominent American gangsters, meeting Philadelphia crime boss Angelo Bruno and Carlo Gambino, who ran the powerful Gambino crime family in New York.

He did many jobs for the Mafia, including as an enforcer. 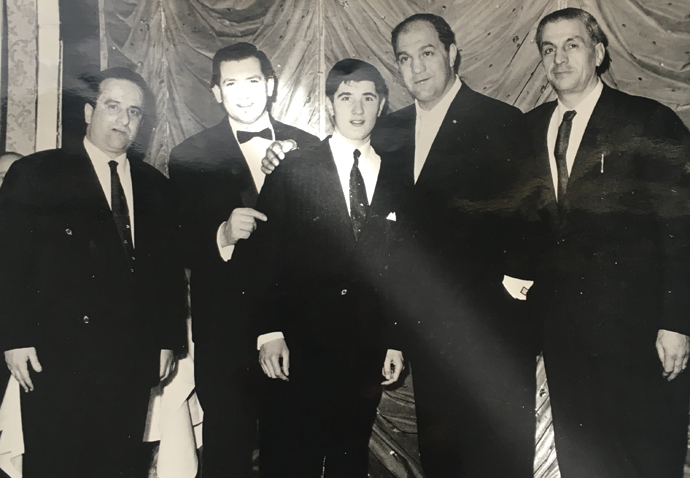 But his favourite job was to look after boxers, including heavyweight champions Rocky Marciano, Willy Pep, Joe Louis and Sonny Liston, when they came to London.

His own family were law abiding. Mr Rossi, unlike the Krays, shunned publicity, “like a ghost”, as he put it. Never flashy, but to many he was the richest man they knew, though he reportedly lost millions through his gambling habit.

Aldo said: “You must understand the environment we were brought up in. You look at New York, all those things, that’s what it was like here. It’s just the environment, it was nothing really malicious.”

Was Mr Rossi tough? “Oh yeah, there was no getting away with it. I won’t go any further than that. People got the wrong impression but you had to be like that to survive in them days, you know. There were some nasty people around. You had to be, not nasty, but firm.”

He added: “But when we talk about gangsters… go down to the Houses of Parliament and the City of London, see how much money they’re laundering off the Russians and the Chinese and the Indians, never mind about the ordinary people. They only get annoyed because you tread on their toes. They get away with it. Of course they do.”

Was that how Mr Rossi saw it? “Well that’s how everybody saw it,” Aldo said. “They run the show. So you try and get a little bit of the crumbs.” 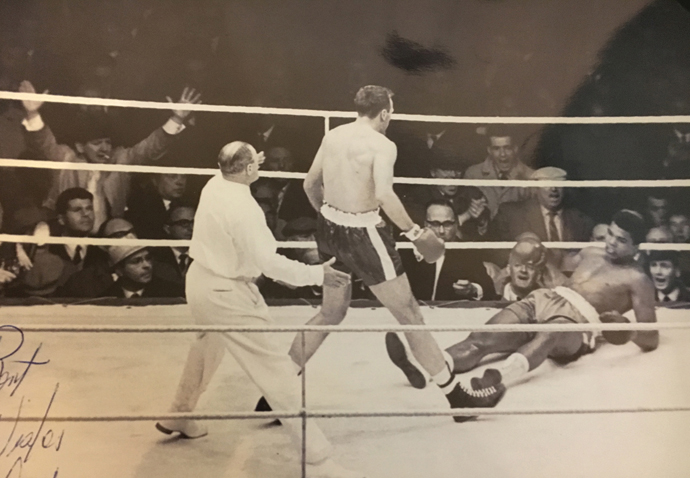 Bert, ringside with his hands raised, at the Cooper-Ali fight in 1963

Mr Rossi retired after he was acquitted in 1975 of the murder of Beatrice “Biddy” Gold in the basement of the clothing business she ran in Clerkenwell – he denied having anything to do with it – though would still do a bit of “consultancy work”.

He was close friends with retired crime boss Terry Adams, at one time a neighbour, who was said to be absent from the funeral due to the presence of the press but sent a wreath to mark his respects.

In his later years Mr Rossi, had a relationship with another Englishwoman, Mary.

He kept up his dapper appearance, usually wearing a three-piece suit. He enjoyed playing cards, seeing old friends around Islington, shopping at Chapel Market, spending time with his family and putting a bet on the racing.

He reportedly ironed his banknotes because he liked to keep everything neat.

Grandson Frankie Rossi’s fondest memories of his grandfather are spending time with him at the Italian procession, where they would sit and chat next to the stall of the late Dennie Mancini, a legendary boxing cornerman.

Frankie, 30, said: “My grandad was a family-oriented man. He loved his family. Her taught me morals, to be respectful, never to be a bully. He loved gambling, playing cards and he loved boxing.” 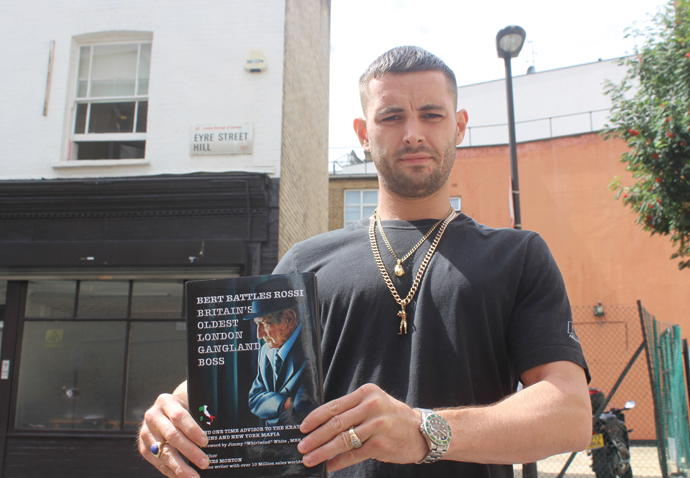 Frankie Rossi with his grandfather’s memoir

Mr Rossi’s memoir, Britain’s Oldest London Gangland Boss, written by crime author James Morton, came out days before he died last month. Frankie added: “He was the last one [alive]. He decided to do the book because he couldn’t incriminate anybody. Everyone else has passed away.”

I’VE always put people together and as a result they’ve given me a tickle, writes Bert “Battles” Rossi. What is it the Italians say? ‘Bagnare il tuo becco – Wet your beak?’ I’ve never demanded it like the [Kray] twins but over the years almost every job which went off from Soho to Islington a bit came my way. It was more a question of respect.

I’ve had plenty of opportunities to be a millionaire but it’s never bothered me. I’ve been comfortable and happy. I’ve kept my money, live in a nice part of London. Who’d have thought an Italian boy from the Saffron Hill slums would end up living next door to Boris Johnson?

I don’t condemn myself. I’m not a grass. I was never a bully. I’ve never hurt anyone who didn’t need hurting. I’ve been a villain but I have respect for people and I’ve never been a hooligan. With all the ups and downs I don’t think I’d have liked to change my life. […]

It’s a question of being strong if you come from the slums. If you’re born poor it’s the only way to survive. […] No one goes out thieving because they like it. If you’ve got no strength, you’ve got no chance.

I grew up in an era when if you didn’t have money you were just rubbish. […] If you see your mother and father have nothing to eat you go get it. We should be called survivors not gangsters.