Family ring skills are handed down to Kacey

Teen boxer is tipped to become a national champion 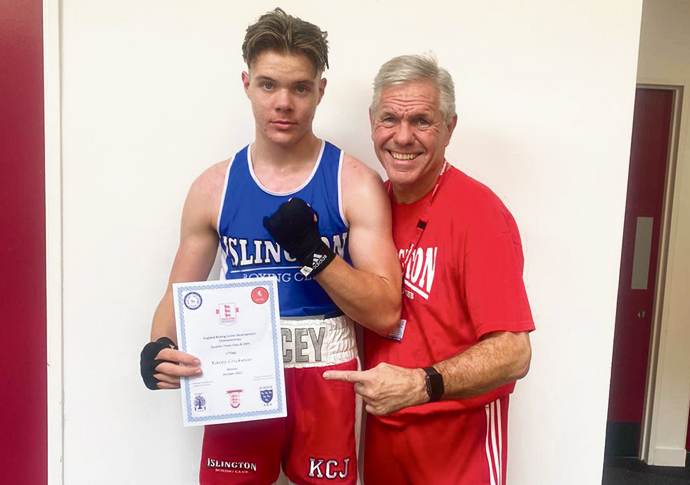 HAVING recently conquered the capital, Kacey Crickmar has now set his sights on a national title.

Competing at Under-75kg, the 15-year-old used his height and reach to maximum effect to beat Bobby Wallace from Belvedere ABC courtesy of a 4-1 split decision at Springwest Academy in Feltham.

The victory propelled Kacey to the England Boxing National Junior Development Champion­ships. But on this occasion the prestigious competition proved a step too far as he lost via a unanimous decision against Kenton ABC’s Harry Loughlin in the semi-finals.

But the feeling is that Kacey won’t have to wait too long for a national title – especially as boxing runs through the Crickmar family blood.

Look back through the record books all the way to 1951 and you’ll find that Joe Crickmar – Kacey’s grandad – was a losing finalist in the ABA Championships against Albert Halsey at Wembley Arena. In 1981, and again in 1982, Kacey’s dad Dave won back-to-back North-East London Divisional titles. Now Kacey has pulled on the gloves.

“Kacey has progressed a long way since he joined Islington Boxing Club, and I think he’s got the potential to be the best of all of us if he keeps working at it,” said Dave, who now trains his son. “All through the lockdowns he’s been keeping himself active and fit, and more recently he’s been able to spar with Kejai Bryan, who won a National Schools title in September.

“Kacey goes to see his grandad regularly, who’s 91 now, and they are always talking about the boxing.

“I know he would love to see young Kacey win a national title.

“He’s very proud of him. If he sticks to his boxing and listens, then he could go all the way.”