Bench remembers the three Gibbons brothers who fought in the conflict 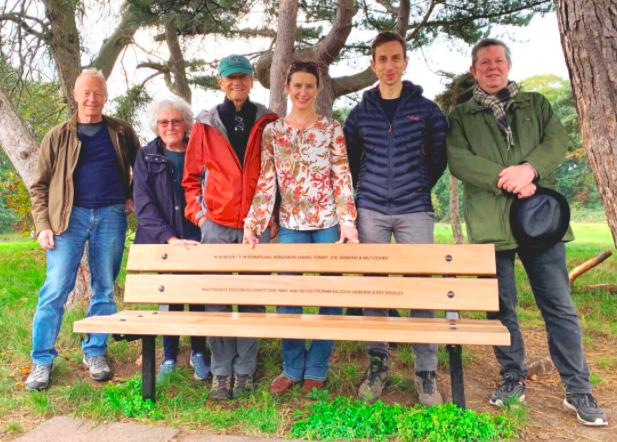 THE family of three brothers who fought in the Spanish Civil War flew in from the US this week to pay their respects at a new bench honouring their memory.

The bench, which replaced an original commissioned in the 1980s that had fallen into disrepair, remembers the Gibbons brothers – Tommy, Joe and Danny – who lived in Camden Town.

Ms Wilson said: “It was so special to be able to get together by the bench. I kept joking with friends that, while some people picked up sourdough bread-baking during the pandemic, replacing this bench kind of became my sourdough starter.

“It was a pandemic project that spanned continents, and honoured a very special chapter in world history, and in my family’s own personal history. I’d like to think Joe and his brothers, as well as Milt Cohen and Pat Dooley, were all smiling down at our gathering today.”

Ms Wilson, a filmmaker, discovered the bench while researching her family history – and believes it was first put in place on a slope overlooking the Highgate ponds by her great-aunt Kathleen Dooley. Ms Dooley’s brother Pat also fought in Spain alongside the Gibbons family, and is included in the dedication.

The family were joined by president of the International Brigades Memorial Trust Marlene Sidaway, and writers Andrew Whitehead and Martin Plaut.