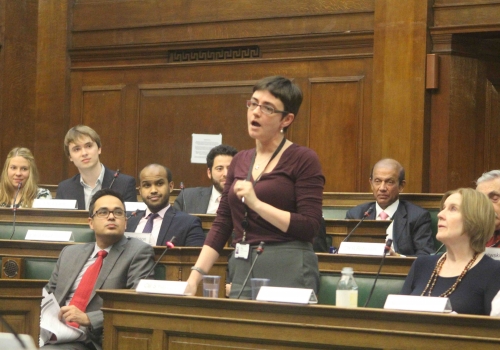 CAMDEN Council leader Sarah Hayward today told Labour Party colleagues that she is stepping down after five years in charge at the Town Hall. She is also standing down as a councillor in King’s Cross at next year’s boroughwide elections.

She said in an email to Labour councillors: “When I started as leader, I set myself two principal goals: to leave Camden in a better place than when I started and to leave group with options for a strong successor as leader. I believe I have achieved both.”

Cllr Hayward added: “As a result of successive selection processes, Labour group is full of talent and I believe that we have one of the strongest cabinets of any council in the country. There are strong, talented options for succession and I have played my part in bringing that talent through. It is now down to you to decide who the right person is to take Camden forward.”

The Labour group will now have to select a new leader at its annual general meeting on May 2.

Cllr Hayward added: “While we have also left Camden borough in a better place overall, this is less straightforward. Seven years of Tory cuts have taken their toll on many much-loved services and have had a devastating impact on some of our residents. Cuts to benefits, cuts to the police and to the NHS have all had an impact our work and have made it harder. There is no doubt that the scale of the cuts have had a very negative impact on our borough and many of our residents.”

She added: “However I have been determined, with your support, to ensure that neither we as an administration, or the officers who’ve helped us deliver, have ever been cowed by the scale of the challenges we’ve faced. I’ve worked hard to ensure people have remained inspired by the level of our ambition for the borough. Despite the challenges, Camden is in a better place because of the work we have done as a Labour administration, putting our Labour values in to practice.”

London Mayor Sadiq Khan was among the Labour politicians paying tribute to Cllr Hayward this evening after the CNJ broke the news of her decision to stand down.

In an online post, Camden finance chief Councillor Theo Blackwell said: “Leadership at a municipal level is different from the more hallowed turf of Westminster. It is about making things work, rather than crafting laws. Some old wag once said the difference between being a backbench MP and a council leader was “one has the powerless glamour of having two letters after their name and the other the glamourless power of being in charge of a huge budget. The people of Camden asked us to come up with a ‘Plan B’ investment alternative to austerity and Sarah did just that. So Sarah leaves her successor — whoever our Labour Group chooses at our AGM in May — a foundation for more progress.”