‘England call a massive chance to prove myself’ 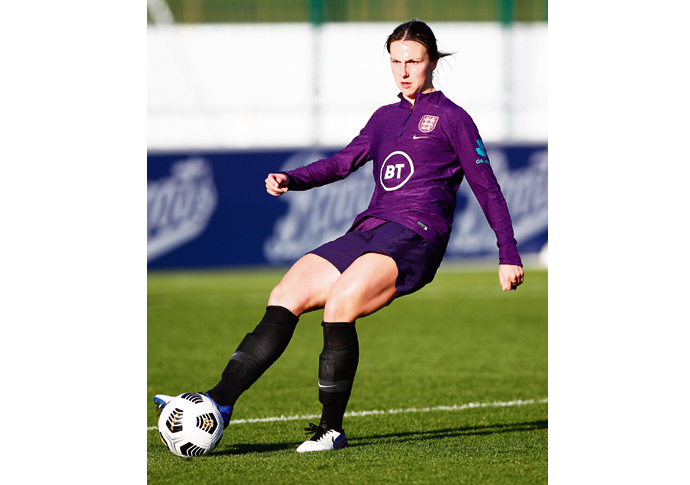 THERE was a time when Arsenal dominated the roster at England camps. That mantle seems to have been taken on by Manchester City these days.

But four Arsenal favourites joined the 24 players who reported to St George’s Park for international duty ahead of two ties in this coming week. Among their number is lifelong Gooner and former Stoke Newington School sixth-former, Lotte Wubben-Moy.

“This is a massive opportunity to prove myself,” the 22-year-old said.

“Every call-up brings with it a wave of emotion, mostly of excitement and anticipation. It truly is an honour to be among the best players in England.”

A former England Under-17s captain and teenage first-teamer with Arsenal, Wubben-Moy has long been tipped as one to watch on both the national and international stages.

A trophy-winning stint with the famous North Carolina Tar Heels while studying in America has added polish to her playing style, as has regular first-team action since her return to Arsenal in September.

And that has not gone unnoticed by interim England head coach and recently appointed Team GB manager, Hege Riise, who gave the centre-back her senior international debut in February against Northern Ireland.

Riise said the Londoner had impressed with her consistency for Arsenal and demeanour on England duty.

“She did well in the camp, I must say,” Riise said. “She is mature, even though she’s young, and she seems calm and focused.”

Mead was initially missed out of that February camp, but injuries forced the manager’s hand and the forward, who has scored eight goals in an England shirt, was eventually called up.

And while Mead did not get to add to her 25 caps on that occasion, she did enough to be included in this week’s squad from the off.

“She had a great attitude coming in,” Riise told us. “She obviously was disappointed when the squad was announced and she worked hard for her club.

“When I called her, she was so eager to come in and she came in positive and worked hard, so that was a good response.”

Gunners Jordan Nobbs and Leah Williamson are also in the squad and will hope to be involved in friendlies tomorrow (Friday) against France, ranked third in the world, and on Tuesday against Canada, ranked eighth.

Both evening matches will be live on BBC4.

For their part, the Gunners overcame strugglers Bristol City 4-0, thanks to a Vivianne Miedema brace and goals from Danielle van de Donk and Beth Mead.

As a result, the Gunners overtook United to sit third in the table – and with a better goal difference and a game in hand, the north London outfit are surely in the driving seat as the season reaches its climax.

That said, manager Joe Montemurro is mindful that their next opponent is mid-table Brighton, who have now beaten Chelsea and United this season.

“We have to play Brighton also, so it’s not done yet,” he said.

“I think it’s going to go right down to the wire.”