International bowler inspires Hampstead to ‘another level’ in convincing victory 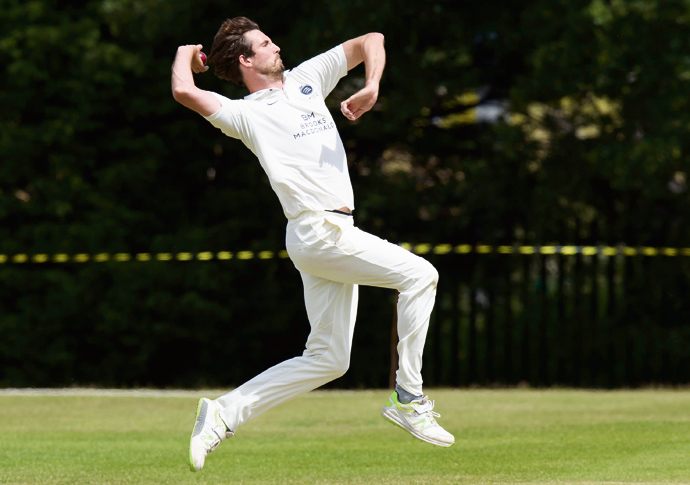 Steven Finn, pictured in pre-season training with Middlesex, made a surprise debut for Hampstead

ENGLAND bowler Steven Finn swapped the Oval for Harman Drive on Saturday as he lined up for Hampstead in the Premier Division of the Middlesex County Cricket League.

The right-arm fast-bowler – dubbed the “Watford Wall” – has played 36 Test matches and 69 one-day internationals (ODI) for his country.

But at the weekend his sights were fully focused on Brondesbury as he took a break from his duties at Middlesex to make a surprise debut for Hampstead.

And while Finn’s impact on the scorecard was a modest one – claiming the single scalp of Anthony Wilkinson – he did help to inspire his new teammates to “another level”.

Hampstead chairman Nick Brown said: “We were outstanding with the ball. Rich Banham with the new ball is a real handful anyway, and having Finny in the team raised him to another level. Then we handed the ball to our spinners, Ben Frazer and Ajit Sambhi, and they strangled the life out of Brondesbury.”

He added: “I’d like to take the opportunity to thank Finny, clearly he would have preferred to have been at the Oval, but his attitude was that of the consummate professional.

“We hope he gets a run for Middlesex, but if he doesn’t there’s a home for him at Hampstead.”

Considering how long cricketers have waited to step back out onto the crease following the coronavirus outbreak, you would think they would want to make the action last. But Hampstead made light work of their trip to Brondesbury, wrapping up their first win of the shortened season in a little over 60 overs.

Jonathan Dunne was Hampstead’s only batsman to offer any real resistance as he scored 56 off 63 balls before being bowled by Wilkinson. His efforts saw Hampstead reach 126 all out off 30 overs.

Banham, however, helped transform that total into a winning score as he picked up four wickets at the expense of just 17 runs. With Frazer (3-19) and Sambhi (2-15) in equally devastating form with the ball, Brondesbury were dismissed for just 86 runs in reply to hand Hampstead a 40-run victory.

“We’re obviously delighted to get the win,” said Brown. “We can reflect on an outstanding performance with the ball and in the field.

“The scorecard tells the story with the bat, we’re indebted to Jonny [Dunne], his runs made the difference. It’s great to have him back at Hampstead, he had a season away last year and he’s back and happy and the results are clear to see.”

There was also a wealth of Middlesex County players in the starting line-up for defending champions North Middlesex on Saturday, including openers Joe Cracknell and Luke Hollman. Cracknell scored 25, while Hollman hit a well-crafted 68 off 108 balls as North Midd scored 182 before being bowled out in the 45th over against Teddington at Bushy Park.

It was 87 runs short of the target they needed for victory after Teddington – led by a knock of 71 from Harry Evans – posted a score of 268-8 from their allotted 50 overs.