Youth footballers beat youngsters from professional clubs, including Nottingham Forest, QPR and Millwall, to win the Pro Invitational Cup for the third year in succession 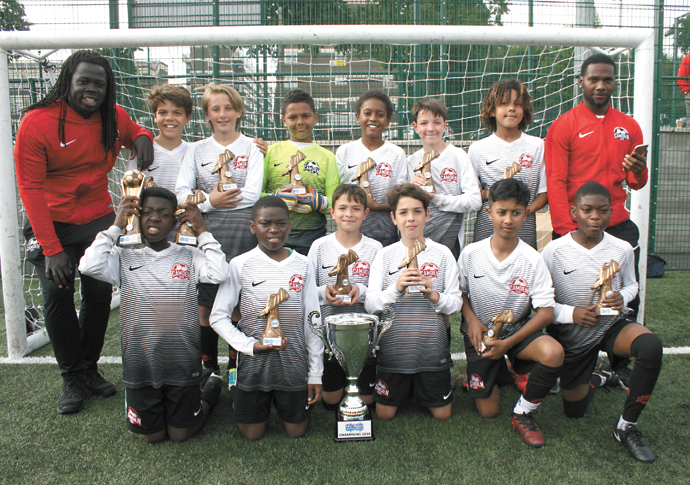 FOR any wannabe footballer, the day a professional club comes calling is a momentous occasion. Even an invitation to just take part in a trial, or join a development squad at a pro club, is often met with uncontrollable excitement as young players start to dream about the potential career that could await them.

But there is one grassroots club that is doing all it can to show youngsters that the grass isn’t always greener on the other side of the pitch, and that they don’t have to jump at the first chance that comes along.

Camden Elite yet again toppled the professionals on Sunday as they won the Pro Invitational Cup for the third year in succession at Market Road in Islington. This time around they beat a host of Championship clubs, including Nottingham Forest, twice, Queens Park Rangers and Millwall, to win the Under-11s tournament.

“In reality grassroot teams shouldn’t be beating academy teams,” said Elite manager Sebastian Eurico. “Professional clubs have some of the very best coaches in the country. They often train three times a week, on the best pitches and have the very best facilities and equipment. We shouldn’t stand a chance.

“The fact that we’ve now won this competition three years in a row, with different age groups and players, is fantastic. It’s the perfect reward for all the hard work that goes on behind the scenes, and shows that we’re obviously doing something right.”

The Pro Invitational Cup, which is organised by Pro Touch SA, ran two age groups, Under-10s and Under-11s. It’s common for the professional clubs to enter teams a year younger to help give their players experience and create a more level playing field.

But Sebastian isn’t convinced that if the pro teams – including Premier League sides Liverpool and Brighton, who also took part in the tournament but failed to make the final – brought along their older players that it would make a difference.

“I know that some people look at the fact that the pro clubs are often playing up a year, but we’ve played a lot of friendlies against top clubs this season, and even when it has been our Under-11s versus their Under-11s, or 12s versus 12s, we’ve won.”

Camden Elite successfully topped their group on Sunday, which included QPR and Millwall, before beating Nottingham Forest 2-0 in the quarter-finals thanks to goals from Isaiah Djoboga and Thomas Keane. They were then paired again with QPR in the semi-finals, which they won 1-0 thanks to another stunning strike from Djoboga.

Arsenal fan Djoboga subsequently capped a player-of-the-tournament display by scoring the winner in the final as Camden Elite beat Nottingham Forest, who had two teams in the age group, 1-0. Djoboga, who lives in Holborn, coolly tucked the ball home from close range after Sullivan De Almeida beat opponents on the wing before pulling the ball back for his team-mate.

Sebastian said: “All the boys were fantastic, they worked hard and deserved to be crowned champions.

“In the final Sullivan was always a threat, and when Forest did finally create a chance right at the end, our goalkeeper, Taurian Philips, was ready and made a great save.

“As for Isaiah, he has everything. He can beat players, unlock defences, hold the ball up – he is something special.”