Elite are kings of the road! 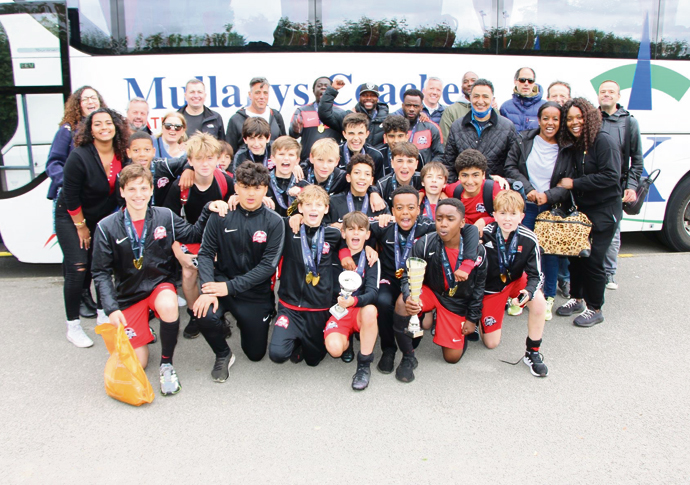 Players, parents and coaches from Camden Elite celebrate doing a double in the Junior Premier League

IF England manager Gareth Southgate wants any tips on how to win an elusive knockout tournament, then maybe he should give the Camden Elite players a call.

The club’s Under-13s side conquered the country on Saturday as they won the sought-after Junior Premier League (JPL) National Development Competition.

Elite’s super squad of wannabe professional footballers clocked up more than 550 miles on the road as they beat teams from King’s Lynn, Coventry and Stockport.

Their reward was another 240-mile-plus round trip – this time to play a showpiece final against Wiltshire Football AFC at Grantham Town FC in Lincolnshire.

And the triumphant team more than rose to the occasion as they netted a memorable 2-0 win to spark wild scenes of celebration.

Emile Libock, who coaches Elite’s Under-13s alongside Edson Pascoal, said he “felt like a proud father” after seeing the players get their hands on the big prize.

“I’ve coached the majority of the boys since they were just four years old, we’ve become one big family,” he added.

“At the very beginning we could never have dreamed of winning something like this. 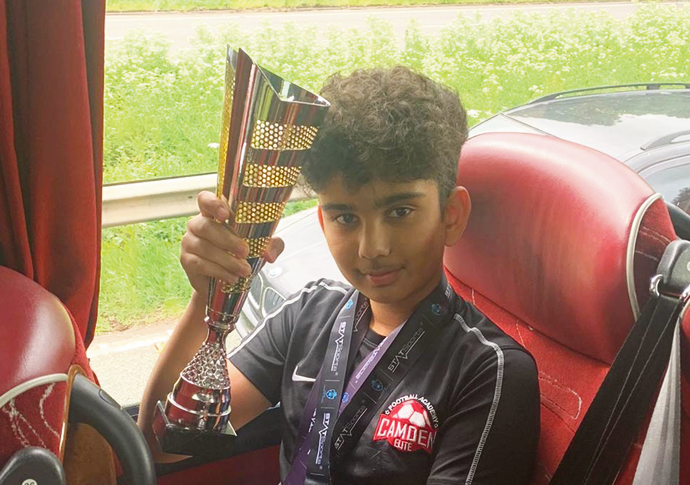 “The standard the boys have reached, playing at an academy level, is phenomenal.”

Saturday’s final proved a tense affair with the parents and siblings who made the trip north to support the boys watching on nervously from the sidelines.

After a goalless first half, Lase Akindele showed a striker’s instincts as he arrived in the penalty box with perfect timing to tap home from close range.

And then came the goal of the game as captain Kiva Madhvani curled a stunning 30-yard free-kick into the top corner. Think David Beckham against Greece in 2001.

But while goals win games, this victory was built from the back.

Kiva was outstanding in Elite’s defence, while goalkeeper Saahil Gani was voted the “man of the match” after making a string of crucial saves.

Reflecting on the big win, the hero shot-stopper said: “There was a tricky one-on-one save with my leg at the beginning of the second half which kept us in the game. 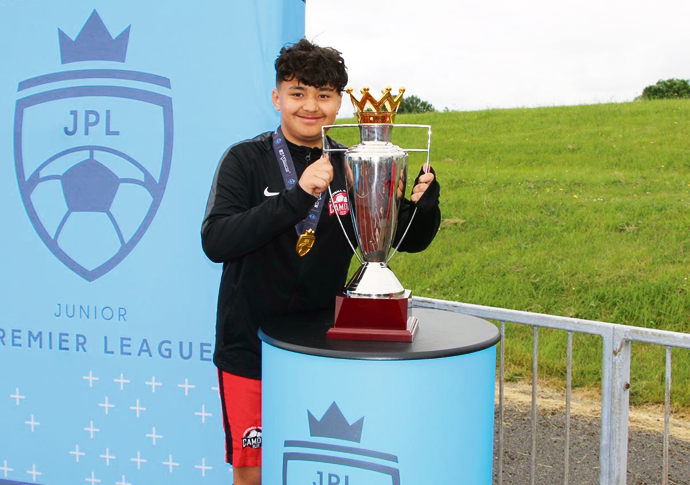 Kiva Madhvani scored a ‘worldy of a free-kick’

“In the last 10 minutes the opposition really piled on the pressure, but we defended superbly and came out on top.

“I am delighted to have been awarded the man of the match.

“I was so relieved to have caught all the shots and to have come out of the game with a clean sheet.”

Elite qualified for the national tournament after being crowned champions of the JPL “East Region”. They boasted an almost unblemished record in the league, winning six of their seven games, and losing just once.

On a day of silverware and smiles, the players were also presented with their league title trophy.

Emile said: “The spirit and determination the team has shown this season has been excellent. From the goalkeepers to the strikers, everyone played their part.

“I also want to give a massive shoutout to the parents – the support they have shown us throughout has been brilliant.”

• Camden Elite are already busy planning for the 2021/22 season. They are hoping to enter their current Under-12s into the JPL Under-13s next season but are in need of more players. To find out about their upcoming trials and age groups contact Jenny Kirby on 07956 955244 or email camdeneliteinfo@gmail.com