Edwin at the double! Silver and gold for indoor rower 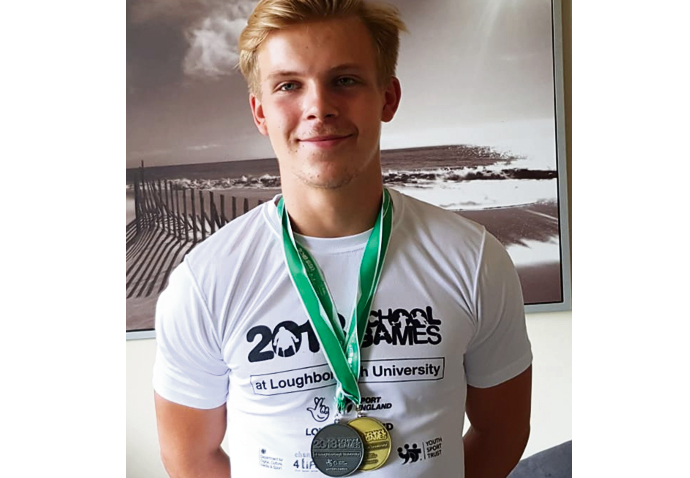 AFTER shaking off the “disappointment” of just missing out on an individual gold medal, relentless rower Edwin Zaimovic said he will look back at the School Games Finals as “one of the most exciting days” of his life.

More than 1,400 young athletes from across the country were given a taste of what it would be like to compete in the Olympics when they took part in the annual multi-sports event, which was held at Loughborough University in Leicestershire over the weekend.

And for Edwin, who lives in Swiss Cottage, taking part in the indoor rowing competition was a day he will never forget.

After finishing second in his heat, the 16-year-old went on to cover a distance of 1,813 metres in the Year 11 Boys’ Six-Minute ‘A’ final. In the end it wasn’t enough to top the winners’ podium as he was beaten by 29 metres by England South team-mate Jack Austin.

“At first I was disappointed not to win gold,” admitted Edwin. “But looking back now I’m happy to have won a silver medal – I can’t exactly complain.

“It was such an exciting event. There were crowds cheering us on, live music and even commentary. It was brilliant.”

Edwin didn’t just return home with a silver medal, however. He was also part of the England South mixed relay team that covered 3,000 metres quicker than anyone else to win gold. His name will also be etched in the history books as it was the first-ever indoor rowing competition to be held as part of the School Games.

Proving that he’s a pure athlete, Edwin will now switch his attentions to a whole different sport. Having finished his time at Haverstock School in Chalk Farm this summer, he will now start his A-levels in chemistry, biology and maths at St Paul’s Catholic College in Surrey, having been awarded a rugby scholarship through the London Irish Academy.