DWHC bows out undefeated – but the fight will go on

COMMENT: There is no democracy in the NHS. Health chiefs’ financial decisions take place behind closed doors and are hard to scrutinise 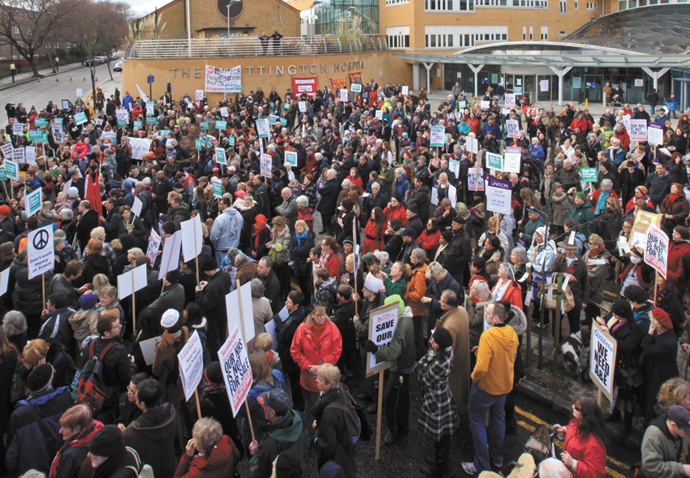 Campaigners were out in force in 2013 to defend Whittington Hospital

THERE was not a dry eye on Zoom this week as the Defend Whittington Hospital Coalition (DWHC) held its “last ever” meeting.

The campaign group has had a string of unlikely successes since it was formed in late 2009 when the Highgate hospital’s A&E was threatened with closure because of funding cuts.

Six months later those cuts were stopped following a huge march and demonstration.

In 2013, following another massive campaign, the hospital’s plans to sell off huge swathes of NHS-owned land to developers was halted.

More recently, the plan to enter into a 10-year contract with a company linked to the Grenfell disaster was terminated.

The DWHC victories felt like a rare moment when the system was working. Campaigners, helped by newspapers, heaped pressure on election-fearing politicians to great effect.

Here at the New Journal, staff were making placards, designing window posters and banners, and taking petitions to leave with shopkeepers.

We rented a double decker bus – twice – and hired a jazz band to play from the top deck. We took it to the streets, and won.

A functioning newspaper should be an agitator and organiser. It should not only be used to disseminate ideas but also to bring people together.

There is no democracy in the NHS. Health chiefs’ financial decisions take place behind closed doors and are hard to scrutinise.

But the DWHC, because of its disputes over the years, was granted monthly meetings with senior managers at the hospital.

Jeremy Corbyn told a story during the meeting about how a former Whittington chief executive had told him about an upcoming plan, but said he would have to run it past the DWHC first.

The group has kept the hospital’s management on the straight and narrow and also kept the public in the know for over a decade. But now, like a heavyweight boxer, the DWHC is bowing out undefeated. Or will it?

Radicals like the DWHC’s Shirley Franklin, Candy Udwin, Jem Lindon, Valerie Lipman and the late Alice Kilroy are the kind of campaigners who have protest bubbling in the blood. They come from a rare stock of people who are willing to storm into a board room, unfurl a banner and make the comfortable feel uncomfortable.

We doubt they will be ready to hang up their Whittington Hospital megaphones just yet. The NHS is under just as great a threat as it was back in 2010.

As Jeremy Corbyn told the meeting: he will go on fighting for an NHS free at the point of use until all the cows come home. And so will we.