Double act: Parlour and upstairs at The Oxford Tavern

They may be very different in style, but, says Rob Ryan, these two rooms have quality jazz in common 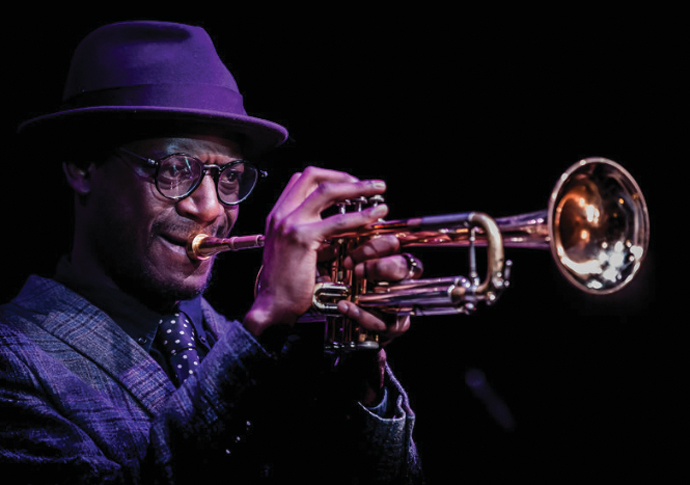 A BRACE of venues in focus this month, one a fresh kid on the jazz block, the other an old favourite re-booted.

The new one is very recent indeed. The Parlour is situated in the basement of The Ned, the huge hotel-meets-Gringotts complex that occupies the former Lutyens-designed Midland Bank HQ on Poultry in The City.

Not so many weeks ago this basement room was a pink-hued, members-only workspace. Now, with its low ceiling and even lower lights, fancy wallpaper, red and gold decor and generously upholstered velvet chairs, it has the feel of a very plush, somewhat decadent, fin de siècle salon and is open to the general public Wednesday-Saturdays, except for Thursdays, when it is still Ned members-only.

It is a beautiful room, although you could be forgiven for thinking the sumptuousness suggests a cocktail jazz venue. Refreshingly, that is very much not the case, as I should have known when I heard that Giacomo Smith had signed on for a residency.

The American-Italian Smith has been a fixture on the UK jazz scene for some time, mainly as the lynchpin of Kansas Smitty’s House Band.

The name suggest a revival/tribute /pastiche group for the music of the 1920s and 30s but that is far from the truth.

Playing only originals inspired by that era the band quickly won a following for the sheer ebullience and brilliance of the players, which originally included the lonesome trumpet and plaintive vocals of Pete Horsfall, the clarinet wizardry of Adrian Cox and still revolves around the sax/clarinet of Smith.

Membership of the group has changed (although, like the Mafia, you never really leave KSHB) and the range of music has evolved to encompass the whole of the last century of jazz, from rag and trad through post-bop to soul-jazz, yet all stamped with the group’s signature sound. Which is spelt “joyous”.

Smith’s residency at the posh Parlour runs on every other Friday. With a carefully curated line-up of five musicians (including Dinosaur’s fine trumpet player, Laura Jurd), his original aim was to play in a Chicago trad style, with an atmosphere close to the room at great US hotels like The Carlyle and the Algonquin. Some nights he does just that.

However, word has already got out about a new, unique and fun space to play and food critic and pianist – not a common career combo – Jay Rayner and comedian Rob Brydon have already sat in and Joe Stilgoe has been down, with more to come. So, expect the unexpected.

I certainly found that on my visit, when Smith decided to use the night to give the full Kansas Smitty’s House Band a workout prior to a gig at the Jazz Café (July 30). The shape of the evening at The Parlour is quite unusual. Music began at 6.30pm, with a trio of guitarist Dave Archer, bassist Will Sach and the mighty Joe Webb on piano, having a whale of a time playing the music of Art Tatum.

The main show was at 8.30pm, split into three sets, with Smitty’s playing its usual uplifting mix of old favourites, recent additions and the odd cover (including a Mingus) with the solo and ensemble work of the front line of Dan Higham on trombone, Alec Harper on tenor and Smith on alto and clarinet particularly splendid.

The music didn’t stop there. At 11pm, again split into three sets, young up-and-coming Scottish singer Georgia Cécile took to the stage, accompanied for the initial slot by Smith. The versatile Cécile is a songwriter in her own right – she has an album of originals out in September, of which more another time – but here she put a beguiling spin on The Great American Songbook, floating us towards a 2am close on a gorgeous cloud of Gershwin, Ellington and Cahn.

You will have a chance to hear her nicely idiosyncratic way with a tune and lyrics soon, because she sings as part of Jazz Voice on November 13. This is the annual curtain-raiser to the EFG London Jazz Festival, featuring a clutch of vocal talent corralled, conducted and arranged by trumpeter/composer Guy Barker.

Although the pandemic disrupted its premiere, the concerto is due to be performed and broadcast at some point in the near future. As for Cécile, as well as securing her a slot in his Jazz Voice concert, Barker is in the process of writing a “jazz ghost story” to feature the rising star as one of two vocalists (actually the same character shown at either end of her career). Again, more later.

Smith’s highly-recommended residency at The Parlour runs every other Friday, but on other nights you might catch hotly-tipped soulful jazzer Reuben James, gifted pianist Jamie Safir or trumpeter Mark Kavuma and his Banger Factory outfit.

It isn’t exclusively jazz – there is cabaret on Saturdays, for instance – so check the listings in advance. I have a few caveats if you book.

The (very good) food and the drink prices are pretty punchy, but this is a grand hotel in the City and bear in mind there is no cover charge for the music: you should factor that in, for given the calibre of musicians on stage, The Parlour represents far better value than you might initially think. Secondly, this isn’t a temple to jazz, like Ronnie Scott’s, with a no-talking rule. Expect chit and chat and laughter around you: the bands certainly do.

As it serves a full menu as well as beverages, don’t expect to take a prime table at 6.30pm and occupy it till the early hours while other still-hungry diners hover. However, the staff will do their best to accommodate you elsewhere in the room or suggest you retire to another bar and return when the audience inevitably thins after midnight.

And finally, given its popularity and, again, the quality of jazz on offer, it could do with investing in a proper acoustic house piano rather than the electronic one it currently uses. But these are quibbles; The Parlour is a very welcome addition to the London jazz/late-night scene. Plus you can always push the boat out and book a room upstairs for the night – the hotel has a first-rate spa and pool to help with that morning-after feeling.

The second venue, upstairs at The Oxford Tavern in Kentish Town, may not be able to compete with The Parlour in term of plushness, but it is no slouch when it comes to the musicians it books.

After an inevitable hiatus caused by the pandemic, it is back in action from next Monday (August 2) with a limited number of tickets available online and at the door and with – for those still nervous about seeing live music – social distancing and mask-wearing while moving about the room is still in force.

The gigs are also all-seated with no standing. Opening the new run is the Conor Chaplin (bass) and Will Barry (piano) Quartet, a couple of seasoned sidemen playing what they call “hand-picked standards” alongside Sam Braysher (alto sax) and Catalan drummer (via NYC) Andreu Pitarch. Week two (August 9) is the talented trumpeter Alex Ridout, a former winner of the BBC’s Young Jazz Musician of the Year.

She is playing in a trio with Will Sach on bass and Jason Brown on drums. That’s a lot of melodic weight to carry on her young shoulders, but having seen her in action at the Vortex, I am certain she will shine.

Also in the pipeline for August is the swinging and swaggering hard-bop trumpeter Mark Kavuma (Augsut 16), last seen by me lifting the roof off Ronnie’s between lockdowns and another who has played The Ned.

A week later Kansas Smitty’s alumni Joe Webb (piano), guitarist Dave Archer and bassist Will Sach have the room, performing their infectious tribute to Art Tatum mentioned above, thus cementing the link with The Parlour. August ends with saxophonist Karen Sharp on the 30th playing selections from her album Another Place – a mix of originals and standards – with Colin Oxley on guitar and Adam King on bass. Sharp is particularly adept on baritone, an instrument which doesn’t get enough outings in my opinion, so expect some lovely bottom end vibrations. Tickets for all gigs are a bargain £10: what better way to start the week