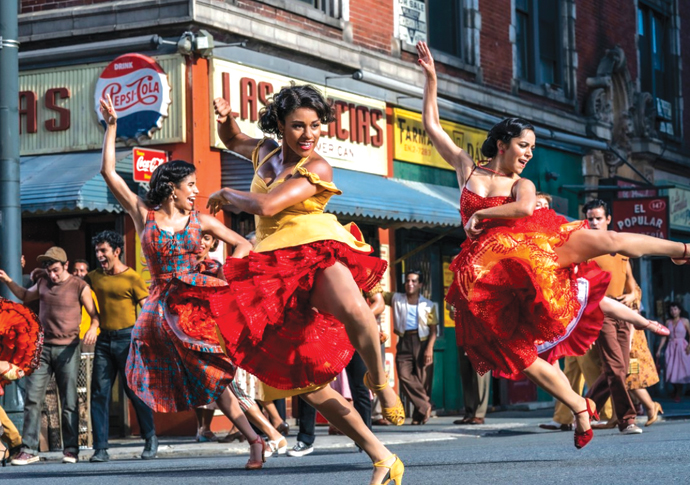 WEST SIDE STORY
Directed by Steven Spielberg
Certificate: 12a
☆☆☆☆

THE never-ending battle between the Jets and the Sharks goes another round in this glorious updating of this classic Hollywood musical.

The 1957 stage version and then the 1962 film adaptation, with music by Leonard Bernstein, has become so well known and so omnipresent that at first glance a new rendering may seem like a fairly redundant exercise.

But in the master storyteller Steven Spielberg’s hands, the story of the Jets and Sharks gangland war is given a wonderful 21st century makeover without losing the sense you are watching something that respects the original source.

An enthralling opening scene – yes, the Jets do the famous calls and finger clicking – gives this gang-based song and dance extravaganza a Spielbergian flavour immediately. A vertiginous camera pan through the slums of the West Side, and the gradual gathering of the Jets is a marvellous mix of theatre, dance and set-placing.

The story is almost too well known to warrant a re-telling here: two gangs made up of youths who live cheek by jowl but are separated by their ethnicity, vie for turf in among the ruins of a New York slum clearance programme.

Tony’s best mate and Jets leader Riff (Mike Fait) wants Tony’s manpower to help win the streets for once and for all – but Tony’s cell time has changed him.

Spielberg has recreated the key scenes as markers for the narrative, and dolloped a layer of visual magic on top.

From the superb sets – the streets and slums have an other-world sense of theatre about them – to the costumes, this is a ramped up rendering of the classic.

Coupled with this, where the pace drops – if you are not a huge musical fan, having the characters have a to-and-fro dialogue and then sing what they’ve just made clear in speech requires a little bit of stamina for two and a half hours – it’s visually so gorgeous, there is plenty to distract.

Sadly, while a period piece, the film’s message cuts through the razzmatazz. The stupidity caused by what are almost overwhelming a male mindset – violence as a source of pride – is a tragic background to what is a joyous celebration of the enduring culture impact West Side Story has had.