Derby to miss fans who made history 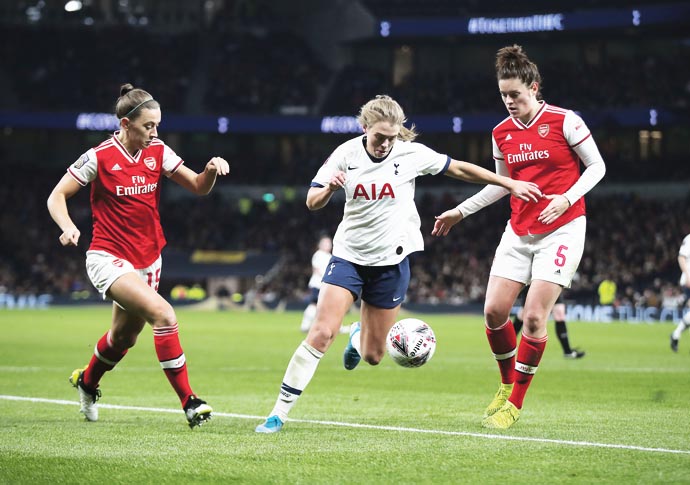 THE Tottenham Hotspur Stadium opens its doors to the FA Women’s Super League on Saturday as Spurs entertain Arsenal.

It could have been a glorious chance to celebrate the progress of the sport in the aftermath of a “landmark” multimillion-pound three-year broadcast deal with Sky and the BBC that kicks in next season.

But unlike November 2019 when a WSL record 38,262 fans roared on the two teams at the men’s stadium, Covid-19 rules mean this time the stands will be empty.

Even so, Arsenal boss Joe Montemurro says he is excited to return to the scene of a 2-0 victory the last time out.

He said: “It’s a beautiful stadium, an amazing situation, we’ve got fantastic memories of there from last [time] and we’re really looking forward to it.”

Supporters can watch live on the FA Player – kick-off is 3.30pm – and can expect a hotly contested match as both sides battle for much-needed points.

After a 1-1 draw with Bristol City on Sunday, Rehanne Skinner’s Spurs sit eight points clear of basement side West Ham, who have two games in hand.

And though the music was pumping in the dressing room at Meadow Park on Friday night after Arsenal beat Manchester United, the two teams are still locked in a battle for third place and with it Champions League football next season.

Millie Turner’s own goal and a header from Lotte Wubben-Moy secured a 2-0 win over Casey Stoney’s United in Boreham Wood, but Montemurro is taking nothing for granted.

He said: “We now know the importance of every game going forward, whether we’re playing Tottenham or whoever, we have to make sure we prepare and we’re ready.”

Arsenal are unbeaten in three outings against Spurs since September, but they have not faced their north London rivals since Skinner took the reins in November.

After a winning start, four defeats and two recent draws have stymied Tottenham’s progress under the former England number two, whose side are set to face all the top-four sides in the coming weeks.

“It’s understandable that we’ll be perceived as the underdogs going into that and rightly so,” Skinner said.

“The results for those four teams have proven that they’re in a really strong position right now.

“But I said it early on, we’ve got to be able to show that we can compete against every team in the league. So I think for us it’s about that fighting mentality, showing a bit of character, resilience and being able to grind out results, because we’re going to have to do that from time to time in these games coming up.”

After a goalless first half, Kerr and former Wolfsburg skipper Harder pounced to put the Blues ahead. But the tie is far from over after ex-Arsenal star Dominique Janssen scored an “away” goal from the penalty spot to make it 2-1.

The return leg is next Wednesday, again in Hungary due to Covid-19, and boss Emma Hayes says she expects Wolfsburg to “throw absolutely everything at us”.

She added: “The first leg is always about staying in the tie. We gave them a game and I’m happy about that. They are a top team in Europe and we rattled them – and at 2-0 you would want us to see the game out.”
Chelsea return to WSL action on Sunday when they host Aston Villa.