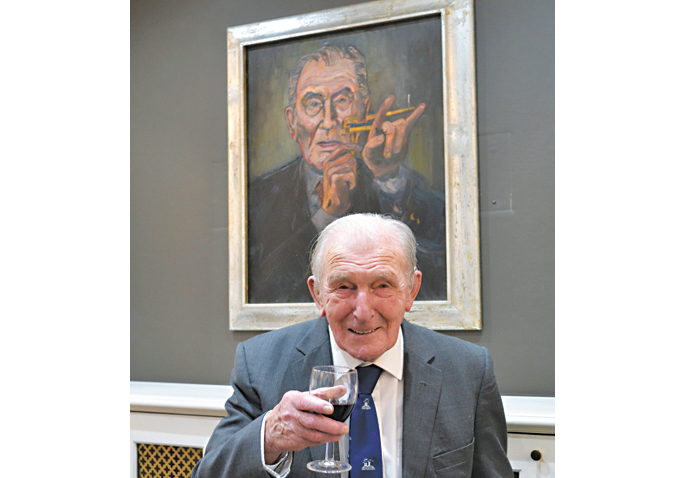 Dambuster Johnny Johnson in front of his portrait. All photos: Edwina Towson

A RIPPLE of applause turned my head as Johnny Johnson, bent backed, now aged 97, walked across the gallery as people made way for him. He headed for a chair under a large portrait of himself, sat down, and stared around at the portraits that filled the walls of the 133 men who had taken part in the legendary Dambusters raid in Germany 75 years ago. He is the only survivor – all the others were either killed in the raid or died after the war. He looked as if he felt surrounded by ghosts.

“This is one of the rare times when I feel as if I am back with the 617 squadron,” he told the guests.

Johnny Johnson was a “bomb aimer” in a Lancaster bomber on that day on May 16, 1943 – and it took 10 dangerous diving runs by the Lancaster before he was sure of his aim. Afterwards he was feted and decorated with honours along with all the other survivors – they have all since passed into history.

But today a question mark hangs over the raid that killed more than 2,000 civilians – including hundreds of women and children, at least in the eyes of “revisionist” historians: Heroes? Or “murderers”? 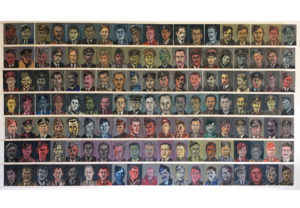 A painting of the air crews

I saw the extraordinary exhibition in a makeshift gallery off Grosvenor Square, Mayfair, on Sunday which was opened by Johnny Johnson accompanied by his daughter Jenny. It is now on display at the RAF Club in Piccadilly for the next fortnight.

And at the club on Tuesday Johnny Johnson gave short-shrift to the critics, I gather.

Were you there, he asked? It was war, and it had to be done!

I was a young boy during the war. The Lancasters were my favourite planes, and I knew what he meant.

Oddly enough, I was also pulled back to the 1960s when, as a reporter, I covered a talk at the Southbank by the famous scientist Barnes Wallis who invented the “bouncing bomb” in the raid that burst the dams on the Rühr.

Though the artist Dan Llywelyn Hall is in his 30s, and the Second World War is remote, something only in films and books, he became mesmerised by the heroism of the Dambusters.

“It has passed down in folklore,” he told me. “My grandfather was in the RAF – and he often talked about it, my thoughts must have begun there. But weren’t they such heroes!”

He contacted the journalist Charles Foster, whose book The Complete Dambusters has just been published, and largely using his archive of photographs of all the squadron, began work on the exhibition three months ago. “I was working eight, 10 hours a day, completing one, sometimes two, portraits a day.” He spoke in a matter-of-fact way but behind it I could sense the emotion he felt about the subject.

Occasionally he referred to the “debt” he felt, and the “gratitude” he owed. 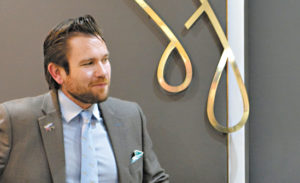 The raid devastated Germany’s industrial heartland in the Rühr and possibly shortened the war.

The gallery was filled on Sunday with relatives of the men in the raid, including sons and daughters, and they had that air about them of special shared feelings. They weren’t strangers taking in an exhibition but somehow a kind of family. Laughter, conversation, high voices filled the air.

Johnny Johnson grew up on a farm in Lincolnshire, only knew poverty as a boy, and joined the RAF at the start of the war. Though he never became a pilot, he stayed on in the RAF after the war as a navigator and squadron leader before retiring in 1962.

While the story of the raid is well known most of the Dambusters have just been names on a list.

Charles Foster has brought them to life with a detailed biography of each one of them – and though written in a straightforward style there is something intensely moving about them, perhaps it reflects the fact that each man knew they had a job to do, and, putting aside fear, went on and did it.

I asked Johnny Johnson to sign my copy, and in the manner of his age and times wrote chivalrously: “With best wishes.” Then we shook hands – and his were large like those of a farmer’s, and firm.