Cyclists in Queen's Park call for bike hangars to stay 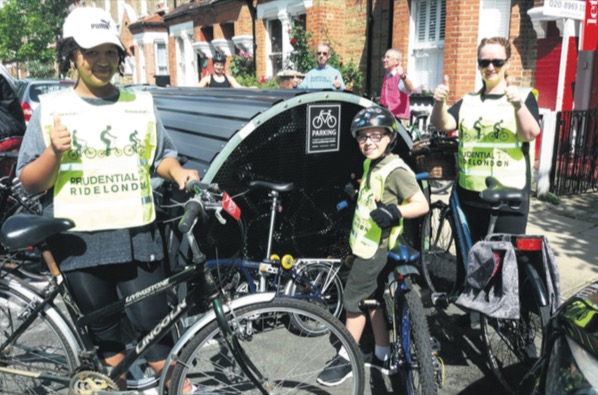 Cyclists in Queen’s Park have welcomed the bike hangars

CYCLISTS have urged the council to make bike storage sheds on the streets of Queen’s Park a permanent fixture. Two steel bike hangars were installed in Ilbert Street in April for a trial period and cyclists are desperate for them not to be taken away when it ends.

Westminster Cycling Campaign secretary Dominic Fee said: “We often receive inquiries about bike hangars from residents who don’t have room in their flats for a bike, particularly residents from the Little Venice and Maida Vale areas. The Queen’s Park bike hangars are a success: both are fully booked and have a waiting list. Participants were impressed to see them at the start of our FreeCycle ride this year, and the question on everyone’s lips was: will the bike hangars still be here next year?”

He urged the council to submit an application to allow the hangars to stay. Before the two storage bunkers were installed, there were no facilities of this kind in the borough’s streets, though some existed on estates. Many have said they are essential for those who want to keep a bike but do not have space in their homes.

Christopher Bowen, 42, a musician who lives in Sixth Avenue, said: “I’m always trying to use cars and buses less and cycle more so I jumped at the chance to keep my bike in one of the new hangars on Ilbert Street. It stays dry and secure in there and my bike is always ready to go. It has made getting out and around in London on my bike easier and more enjoyable so I cycle more. I only wish there were more hangars so one could be nearer to my house. With 12 bikes in one car space all contributing towards the cost of the hangar I think there could be more of them.”

Mr Bowen added: “The Queen’s Park estate was built in the 1870s and it would only be the last 50 or 60 years that cars have outnumbered bikes in the area. I like to think cycling is not only a greener future for London but true to its past.”

Cabinet member for city highways Cllr Danny Chalkely said: “The trial of bicycle hangars is ongoing, and the future of their use will be fully reviewed at the trial’s conclusion. Planning conditions for current hangars are under review as part of the scheme’s assessment.”

TfL rules out a plan for path over the Westway

CONTROVERSIAL plans to create a cycle path over the Westway have been scrapped, Transport for London have confirmed. TfL had consulted on plans for a continuous segregated cycle route from Paddington to Wood Lane as an extension to the East-West Cycle Superhighway. Critics feared a cycle path on the Westway would create problems.

These included difficulties getting on and off the elevated route and potentially unpleasant cycling conditions due to noise, spray, and air pollution. There were also worries abut the cost of adapting the road. In general, the consultation, in February and March 2016, showed strong support for segregated cycle routes across west London.

Cycling campaigners feared the change of plans may take mean the project may take longer to become reality, but said an alternative route may benefit those making local trips more.