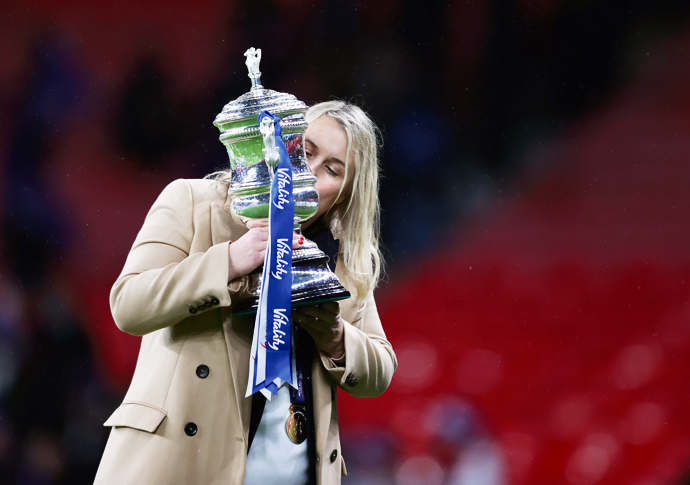 EMMA Hayes wrote her name into the record books on Sunday when she became the first female manager to win a hat-trick of FA Cups.

But before her Chelsea side’s stunning 3-0 win over London rivals Arsenal at Wembley Stadium, the former Parliament Hill School pupil gave her players a history lesson that few will ever forget.

That was an edict that stood until 1971 and the women’s game has been playing catch-up ever since.

So on a special day for the sport, Hayes stood in the dressing room at Wembley and made sure her squad knew all about the trailblazers who paved the way for both sets of finalists in 2021.

“I read the quote to them before the game about what was registered with the FA Council when it was banned, and how remarks were made that ‘the game of football is quite unsuitable for females’ and they don’t recommend they do it,” she told the New Journal.

“I think that was quite shocking for our non-English players, to realise what had actually gone on historically in our country.”

Hayes, 45, also made sure her players knew about one of the country’s most famous past teams: the Dick, Kerr Ladies, who played in front of tens of thousands of spectators before the 1921 ban.

“I said today we want them to talk about Chelsea women – we are the dominant side in England and I think securing the treble confirms that.” Hayes added.

“Yes, of course I’m honoured to be the first female to [win the Cup] three times, but I’m more honoured by just how far the game has come and that we are playing our part in that future.”

Almost 41,000 fans and a BBC audience of 1.5 million watched, as Fran Kirby’s smash-and-grab opener after just three minutes and a stylish Sam Kerr brace beat Arsenal to secure a first-ever treble for Chelsea.

But that cup final was a hangover from last term’s Covid-hit campaign, so after taking time to enjoy the victory with her family, albeit with a cup of tea and an early night, Hayes’ focus is now back on Europe and the FA Women’s Super League.

And it was the same for WSL table-toppers Arsenal, who tonight (Thursday) are set for yet another big match when they host Champions League holders Barcelona at the Emirates Stadium.

Head coach Jonas Eidevall admitted that his team had come up short against Chelsea, but he told his players in their post-match huddle that they could bounce back.

• Early bird tickets are available for the 2022 FA Cup final on May 15 at Wembley. Visit thefa.com for details.