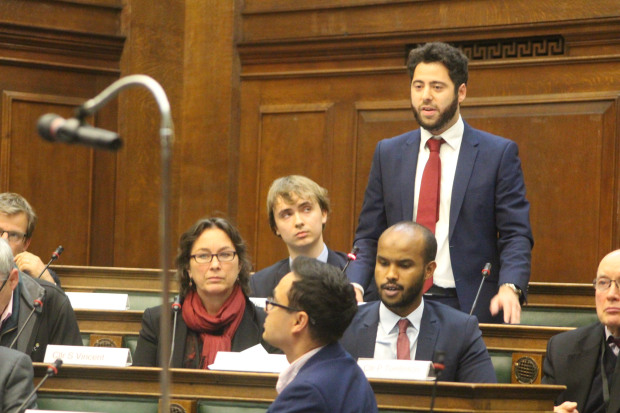 A LABOUR councillor has said he will boycott party meetings after complaining of “institutional racism”.

Phil Rosenberg said “twisted individuals” had an obsessional interest, which he argues is revealed in repeated motions that singled out Jewish people and Israel. In an article for the Jewish News, he said that one despairing colleague had told him: “’Why beat around the bush? We should just wear ‘yellow stars’ next time?”

Labour HQ has been urged to intervene and central office are said to have agreed to investigate Cllr Rosenberg’s complaints.

His anger follows a private members meeting in the constituency last Wednesday night, which saw Cllr Rosenberg storm out in fury after a vote was passed in favour of a motion calling for the removal of a prize award to the Jewish Labour Movement (JLM).

The Del Singh Award, created in honour of a British aid worker killed by a suicide bomb in Afghanistan in 2014, was was given to the JLM and MP Louise Ellman last year for “engaging and mobilising the Jewish community in support for Labour campaigns”.

But relatives said the choice of winners would have conflicted with Mr Singh’s views and asked Labour Party leader Jeremy Corbyn to apologise for handing out the award at last autumn’s conference in Brighton.

In the private vote of Hampstead and Kilburn members last week, the motion calling support for the family’s stance was carried by 30 votes to 26, according to figures published by Cllr Rosenberg in his article.

Supporters of the motion say there is no evidence of prejudice, racism or anti-semitism, and that they were simply supporting the wishes of Mr Singh’s relatives.

But Cllr Rosenberg said: ”The vote was a symbolic gesture and will have no impact on the award given. The political poseurs who proposed it knew this. But as I warned on Wednesday, amid a nauseating cacophony of jeers and heckling against anyone who dares question the ‘permitted groupthink’, the effect on most Jews will be a clear sign that this is no safe space for us.”

And he said a problem within the party went further than one disputed motion, because at seven out of the last nine meetings there had been similar moves to criticise Israel. He described these motions as “toe-curling”.

Hampstead and Kilburn MP Tulip Siddiq and council leader Georgia Gould were at the meeting, and have been contacted by the New Journal for their views on whether racism is rife in the Labour ranks on their patch.

Ms Siddiq said: “I have a long track record of standing up against and calling out anti-Semitism. No instances of anti-Semitism can be tolerated and if people do not feel that their local CLP is a safe place then that has to be addressed. I have already raised this with the regional Party and will be working with them to do whatever is required to ensure that our local Labour Party is a safe and friendly place for all members.”

Several people inside last week’s meeting have described the atmosphere as tense with various reports of heckling and interruptions.

Cllr Rosenberg, a director at the Board of Deputies, admitted that it would be confusing to some observers that the motions were actually coming from Jewish members, but added: “I take utter exception to their attempts to excuse – or even lead – an assault against most Jews that involves a repeated singling out of Jews and Israel and an apparent blanket absolution for those who make racist comments.”

He has said most of the motions originate from the Kilburn Brent part of the constituency, added to the Camden electoral map ahead of the 2015 general election.

The councillor, who is stepping down from the Town Hall at May’s local authority elections, told the New Journal that the normal protocol for privacy around meetings could not restrict free speech due to the severity of his concerns and he felt it was his “duty” to speak out.

He said he had tried to resolve things internally before going public.Members who voted for the motion and card-carriers of the same view are understood to have contacted local organisers about whether there has been a breach in the rules against leaking details of meetings.

One supporter of the motion said they had been warned that the result of the vote would be given to the press before the vote. Another said Cllr Rosenberg’s article was inaccurate because the same motions kept coming back to meetings because they had not been discussed at the previous one due to “filibustering”.

Cllr Rosenberg, however, said Jewish members had to “run a monthly gauntlet of derision to be part of Hampstead and Kilburn” as he confirmed he would not attend further meetings until action was taken.

Since publishing the article, Cllr Rosenberg on Friday he has had a wave of supportive messages. Labour councillor Danny Beales said: “There is no place for racism and anti-semitism in my Labour Party. Phil Rosenberg is a great councillor, colleague and friend. Let’s not just get angry or upset. Let’s change our party and community so it’s a space for everyone.”

“Well done for this Phil,” added Sally Gimson, a Labour councillor in Highgate. “Time to call out what is happening. This cannot be tolerated in the Labour Party.”

But there have also been clashes on Twitter with one strikingly open exchange.

One member told Cllr Rosenberg: “I’m shocked you’ve chosen to label all those members who chose to show solidarity with a dead man’s family anti-semites”.

She added that she was a black woman who had faced racial discrimination in the party. Cllr Rosenberg told her in reply that she had not been overlooked due to race or gender, adding: “You lost because you keep doing stuff like voting for motions like these. Time to change?” The fractious exchange, in full public view, continued for several more tweets.