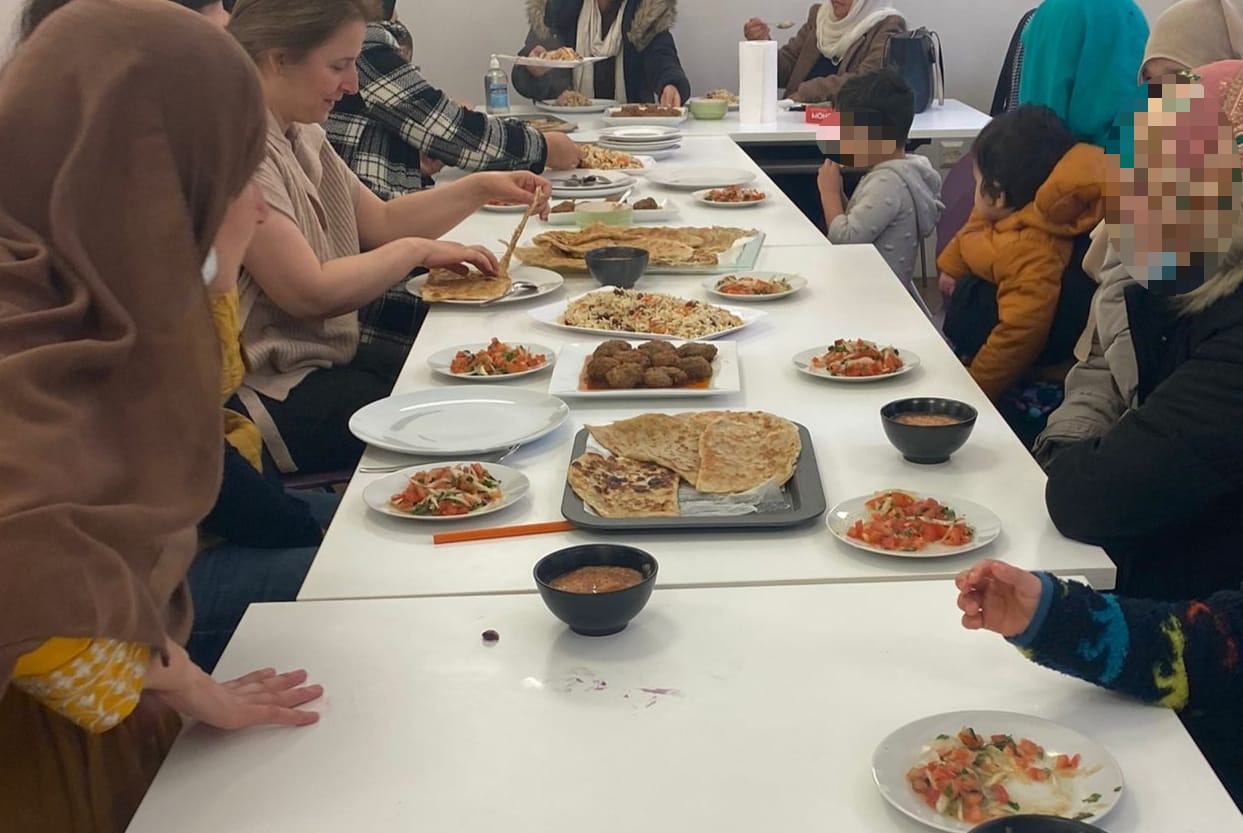 AFGHAN meatballs and chutneys are being prepared in Fitzrovia as a community centre runs cooking sessions to help refugees stuck in hotels.

The New Journal reported last year how families are living in hotels across the borough after fleeing the Taliban. Some of them have now been there for months without any sign of being settled in homes.

Donna Yay, director of the Fitzrovia Community Centre in Foley Street, said: “We had a group of 27 people come down on Monday: 12 women, seven young children and seven dads. They were so happy to use our kitchen and cook their own food – they’re halal, so their options in the hotels are very limited.”

She added: “They made rice and meatballs with some chutneys and salad. You could really see the emotion on their faces at having something to eat from their own culture.

“There’s one family we’re helping who hadn’t left their hotel before Monday’s session. They are from the countryside in Afghanistan so it’s a huge culture shock.”

The centre is finding an English teacher for the families and asking for people to donate buggies and scooters to help them go out with their children.

Ms Yay said: “There is one family with 10 children under 13. They’re really struggling to get out – it’s a nightmare with so many young children. That’s why we’re asking for buggies and scooters.”

Having seen the success of Monday’s event, the centre is planning to host weekly cooking sessions and is asking for cash donations to buy ingredients as well as equipment for the families to cook with.

Ms Yay said: “We’re looking for big cooking pots and utensils. We have a great kitchen but we don’t have enough equipment. We also need suitcases for people to store things in their rooms, or even laundry bags would do. Currently they have to keep their clothes on the floor.”

She added: “It’s our responsibility as a community to band together and help them while they’re here.”

There are two collection days, on January 20 and 21, with people asked to drop items off between 10am and 8pm.
For cash donations there is a link on the centre website, or a cash box inside the building.

In November, the New Journal met refugees who had been caught up in the chaotic stampede at Kabul airport as thousands tried to leave the country before the Taliban took control. Lives were lost in the crush, as well as among those desperate enough to cling to departing planes.

Camden Council publicly pledged to help refugees coming from Afghanistan but Town Hall leader Councillor Georgia Gould said: “The Home Office, who manage the refugee programme, has failed to make clear plans for how families will be housed, leading to further uncertainty and the unacceptable situation of families being kept in hotels for months on end.

“We are demanding the Home Office provide a plan for long-term accommodation of refugees and, meanwhile, we are working with other London boroughs to agree London’s housing offer, with the aim being to house as many refugees as possible.”

A government spokes­person said: “There is a huge effort under way to move families into permanent homes so they can settle and rebuild their lives.”