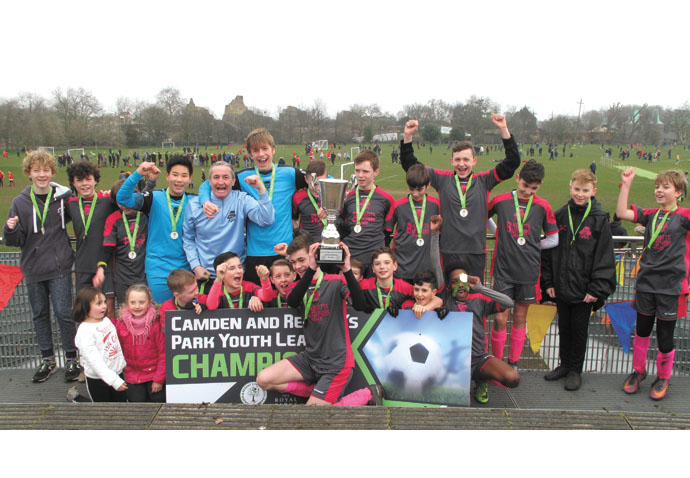 THE celebrations look set to continue for Parliament Hill Youth FC after they moved to within one win of adding yet more silverware to their trophy cabinet.

The talented young footballers went into Easter on a high having already cracked the Camden and Regent’s Park Youth League.

The players had certainly earned an extra chocolate egg or two having been crowned the undefeated Under-13s champions – winning nine and drawing one of their 10 games to retain the title they won last season as Under-12s.

“I have known a majority of these boys since they were playing as Under-8s,” said manager Scott Cole, cousin of West Ham, Chelsea, Liverpool and England star Joe.

“I coached them when I was with Regent’s Park FC and West End FC – where I go, they go.

“They’re a great bunch. They train hard and they reap the rewards for that hard work. They play football the way that it’s meant to be played, from the back, progressing down the field with confident passing and teamwork.

“Eight of the boys play for their district team, Camden and Islington or Barnet, and that shows the quality in the squad.”

Reflecting on how much time he has put in with the players, Scott joked: “I see more of these boys than I do my own children. I’m so proud of them and what they’re achieving, both on and off the pitch.”

And it’s off the pitch where Scott says the hard work begins. Not just in training, but how they behave and represent Parliament Hill Youth when they’re at school.

“One of our club rules is that if you misbehave and get in to trouble at school, then you won’t play in the team.

“Any trouble and you’re suspended for a game and won’t play – it’s that simple. But, to be honest, it doesn’t happen very often with this group of players.

“I think it’s the way forward for football clubs so that they can try and influence their young players when they’re at school or hanging out with their friends.”

At the moment Parliament Hill only have their Under-13s team, but Scott will be holding trials every Saturday at Acland Burghley School in Tufnell Park in a bid to bolster his ranks.

“We’re especially excited to be introducing a new girls’ team,” he added. “There’s so many more opportunities now in Camden and Islington for girls to play competitive football, with the local leagues all now hosting regular fixtures. We certainly want to support that and be a big part of it.”

• Parliament Hill Youth will be holding trials every Saturday for five to nine-year-olds at Acland Burghley School between 10am and midday. For further details call Scott Cole on 07825 999 030.