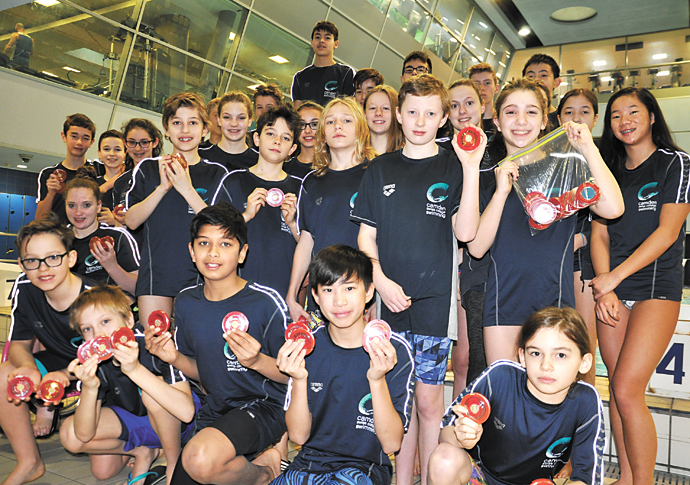 The talented swimmers show off their medals

MEMBERS of Camden Swiss Cottage Swimming Club made a strong start to the new season when they competed in the Middlesex County Youth and Age Group Championships.

At the first meets under new head coach Adam Taylor, both of the age groups finished as runners-up in their respective team competitions – producing more than 300 personal best times along the way.

Para-swimmer ­Charlotte Hyde topped the club’s gold medal table with five wins, swimming to victory in the 50m, 100m and 400m freestyle, the 100m backstroke and the 100m breaststroke. The talented 16-year-old added a ­silver medal in the 200m individual medley.

Ella McEver claimed 10 medals over her two weekends of competition. She dominated the breaststroke events for the third consecutive year by winning the 50m, 100m and 200m events.

The 13-year-old also scooped silver in the 100m, 200m and 400m individual medley, the 800m freestyle, and the 100m butterfly. She wrapped up a magnificent weekend by taking bronze medals in the 200m backstroke and the 200m butterfly.

There was also a hat-trick of wins for club-mate Jackson Olin, who won the 100m and 200m backstroke and the 100m butterfly. The 16-year-old added to his overall medal tally by finishing second on the podium in the 50m and 200m ­butterfly and third in the 100m freestyle.

Ally Larson, 18, continued to demonstrate her great versatility by taking gold in the 200m and 400m individual medley, along with silver in the 50m butterfly and bronze in the 100m butterfly and 100m freestyle.

Another of Camden’s top performers was Ava Lambropoulos, who ended the championships with nine medals. The speedy 11-year-old won gold in the 200m individual medley and silver medals in the 100m individual medley, the 50m, 100m, 200m and 400m freestyle, the 50m and 100m butterfly and the 100m backstroke.

Leo He, 13, amassed four medals, bringing home silver in the 50m freestyle, and the 50m and 100m butterfly, as well as bronze in the 100m individual medley.

After seeing Camden also win a couple of gold medals in boys’ relay races, assistant head coach Gerry Gillespie said: “As a coach, I was very proud of the performances that our swimmers produced during three weekends of tough county competition.

“Our swimmers clocked some great times this early in the season and demonstrated improved skills. They also showed determination and resilience and I am already looking ­forward to seeing what they can produce later in the year.”