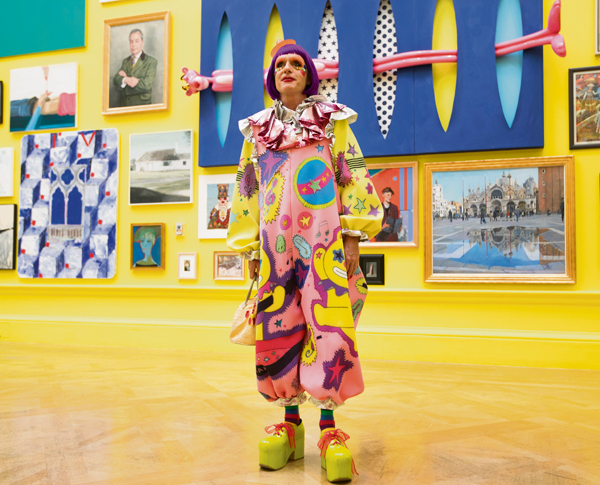 Great fun in Piccadilly as the Royal Academy marks its 250th anniversary with a clown heading up its Summer Exhibition, and extra shows to offer – more than ever – something for everyone.

From the great, good, bad, indifferent, what’s historically been the world’s largest open competitive art show, the academy’s Summer Exhibition goes on. Yet in a good way 2018 has seen not just a change of setting, in that the RA has enjoyed a £56million rebuild, but also in its approach. So much is online, together with a full programme of events and links and there is a commitment to expand its educative role.

And its new season reflects this, with much of the RA’s old Burlington House inner sanctum given over to The Great Spectacle 250 Years of the Summer Exhibition, presenting relevant works to reflect the history of the tensions, self-promotion, and rivalries which drive and have driven artists to work, then and now.

Think “fresh” Constables, “glowing” Turners and under-rated Girtins. There are some 80 paintings, etchings and sculptures, from the first show in the 18th century through to the 21st.

There’s an amateur Winston Churchill oil, sublime Reynolds and Gainsboroughs, then Whistler etchings, Millais oils, through to Singer Sargent, Laura Knight, Ruskin Spear, and down to Tracey Emin, Michael Craig-Martin et al.
The two latter, of course, feature in the 2018 show, but arguably would not necessarily win a quality contest if compared with the Val d’Aosta mountain landscape by John Brett (1831-1902). Of this rarely seen painting, from a private collection, shown in 1859, John Ruskin wrote: “…and here, accordingly, for the first time in history, we have, by help of art, the power of visiting a place, reasoning about it, and knowing it, just as if we were there…”

Nevertheless in this year’s Summer Exhibition, with a theme of “Art Made Now” there are Emin and Craig-Martin works available from as little as £1,100 to “prices on application”; El Anatsui is offering one of his aluminium and copper hangings on the same basis. Some Hockneys are not even for sale! And all are trumped this year by Banksy (whose name and address, strangely, does not appear in the exhibition list) who has priced his work at £350million.

Good on the RAs, at any rate, who set high prices, because exhibition proceeds have, and still do, fund the three-year postgraduate course for some 16 students a year for the RA Schools’ unique diploma. The students pay no fees.
As a first I can remember the RA Schools’ end-of-final-year show coincides with the Summer Exhibition proper.
“One to watch”, a senior tutor suggests, is Charlie Fegan, and he is probably right. 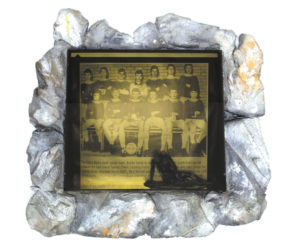 One of his pieces has at its heart a newspaper picture of a young Bobby Sands (the Provisional IRA member who died on hunger strike in the Maze in 1981). It’s the Stella Maris football team, with other players who went on to join the loyalist Ulster Volunteer Force.
And there’s plenty more political stuff on offer. 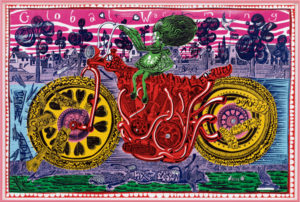 “Clown” co-ordinator of the main show is Grayson Perry, whose own works include Selfie With Political Causes, a woodcut offered at £51,600 (edition of 12). Farage, Jacob Rees-Mogg and Trump put in an appearance.

Naturally, there are cheaper works on offer –1,277 in the main show – drawn from an entry of more than 19,000. They come in every shape and form, from a donkey or a bejewelled poodle, to a giant bear emerging from a rug, or a bronze of WG Grace.

Among my favourites are a great Human Cargo triptych by Camden-based Paula Rego, and an “index system” displaying and classifying by “shape”, “contortion”, etc, the humble cornflake by Anne Griffiths. And in the Schools section there’s a collection point for your coins and banknotes accompanied by the advice: “All proceeds are to remain part of this artwork.”

• At the Royal Academy of Arts, Piccadilly, from June 12 to August 19.
RA Schools’ final year show June 8 until July 1.
www.royalacademy.org.uk