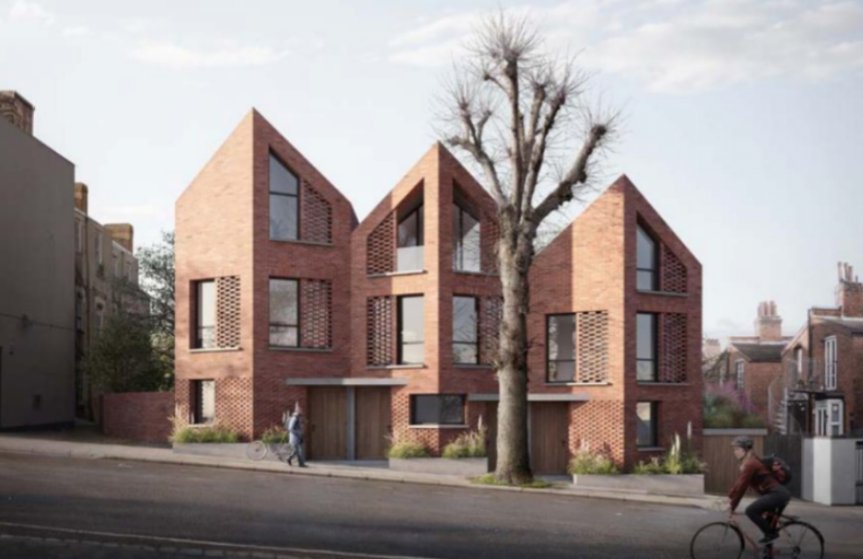 FURY over a new development in West Hampstead exploded at a council meeting this evening (Thursday) as objectors shouted that people would be left looking out of their windows at a brick wall.

At one stage a chair was thrown, and in chaotic scenes expletives could be heard ringing out across the council chamber. “Everybody, stop paying council tax” was cried out to the room, while members of the planning committee were asked if they were “on the side of the rich”.

Watch: The planning committee witnessed a furious response its green light for work to begin in Gondar Gardens

The meeting was broadcast live to Camden Council’s website and everybody attending was told at the beginning that the proceedings were being screened to viewers online.

Some of the footage has been edited for those looking to watch it now.

Councillors voted in favour of building four new three-storey homes in Gondar Gardens, but objectors living in a nearby road had told the council that precious daylight to their home would be lost.

Marie Adie, who lives nearby, said it was “obscene” that the council’s planning department had called the impact “immaterial”.

Objectors were given five minutes to make their case, even though a discussion over whether a screen could be shared to the meeting took several minutes beforehand.

“I’m protecting my flat and you are giving me two minutes,” said Ms Adie.

The land will be built on an ‘infill site’, but the objectors say it should be seen as a tree-lined garden. “It is an abuse of the English language,” Ms Adie said.

Her written objection had said: “The scheme would block our main source of light and render our flat much darker. It is shocking and appalling that the planning officer didn’t even bother to do a site visit and considers the loss of daylight ‘’immaterial’,” their objection said.

“By granting this application the planning committee would deprive us of light – and the other three residents on the south side – and spoil our enjoyment of our home to the degree where we would have to consider moving out.”

When they were told they could say no more, Cecilia Adie, who also lives next to the site, carried on regardless and told how she had seen bats flying in “figures of eight” around the site, adding: “It was the most enchanting manifestation of nature I’ve ever seen.”

Ward councillor Lorna Russell also spoke in opposition, adding: “The geometrics are a 45 degree roof, as well as the red brick which just does not blend with the frontage of the mansion blocks at this part of Gondar Gardens.”

And Conservative committee member Councillor Andrew Parkinson said: “It seems to me it’s made no attempt whatsoever to fit in with local character. There’s the red brick but also this sort of V shaped design which isn’t something that you really see in the local area.”

But Camden’s planning officers had recommended permission be granted in a report which said: “The proposed development would occupy most of the currently open plot with a new three storey building. There would be some impacts on residential amenities of neighbouring occupiers but these are considered acceptable on balance, and any harm found would need to be balanced against the scheme’s contribution towards housing.”

Warning: Some viewers may find language in this video offensive  – this is the edit being used by Camden Council’s web team

“Some temporary harm would be had during construction; however, this would be managed via a recommended Construction Management Plan. Overall, the proposals would deliver a good mix of new homes, with a high-quality design, and excellent sustainability credentials.

It added: “Officers have given significant weight to the environmental credentials of the scheme, the design quality, and the delivery of new homes (including a payment-lieu of affordable housing) and recommend approval.”

PILs or payment of lieu have proved controversial because developers do not have to build affordable housing on the site and instead send money to the council, which could put it into schemes elsewhere.

Lewis Westhoff, representing urban planners Iceni, the applicants, told. the meeting: “The Gondar Gardens site is a challenging site and the scheme is a result of more than two years of design evolution, revolution, iterations and visions. We believe the scheme represents an exemplar residential infill development that shows how challenging sites such as this can deliver new high-quality residential homes.”

He said an earlier scheme was rejected and a new architect had come in to draw up a new idea.

“The brief was to design a scheme that was appropriate for the site’s context and not driven by a minimum quantum of units or floor space,” he said.

‘This approach has resulted in a scheme that is far more appropriate for the site and in our view, has responded to all previous reasons for refusal before.”

More angry scenes followed the final vote with councillors told they were turning London into a “shithole”.