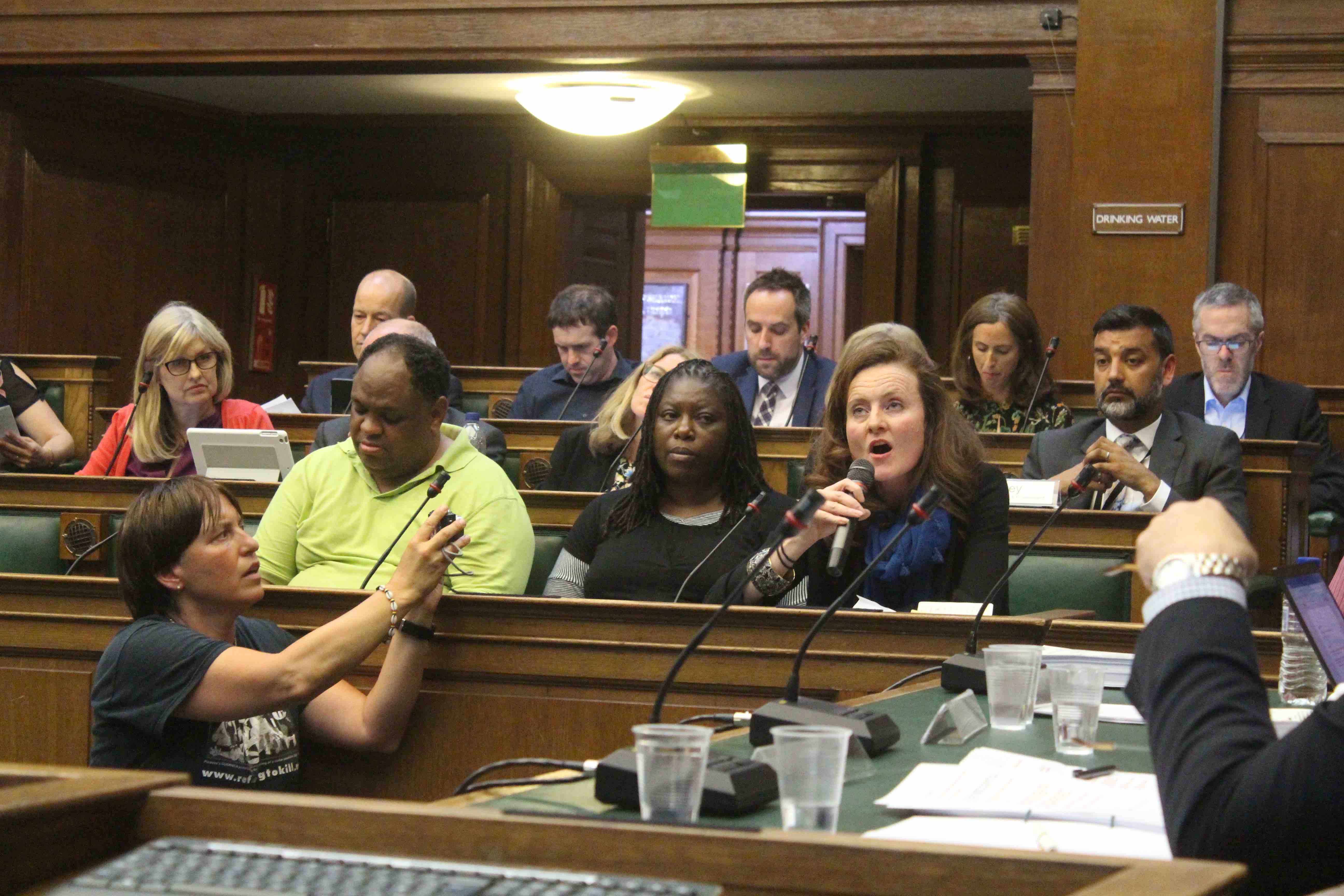 LABOUR councillors walked out of a cabinet meeting after they were booed and jeered as “Tory rats” for agreeing to a raft of stinging welfare cuts. The Town Hall was packed with disabled residents and campaigners opposing plans to introduce care charges and shut down day centres in Camden.

It followed a lively demonstration with protest songs and music and the atmosphere inside the council chamber was already volatile when Councillor Pat Callaghan lit the fuse with what opponents said was a “personal attack” on Netherwood Day Centre campaigner Jane Clinton.

Ms Clinton had said in a deputation on Wednesday that councillors wanted to “wash your hands of people with dementia – it’s a disgrace”. Cllr Callaghan responded: “We would love to do everything we did pre-2010 but we cannot maintain services when our budget has been cut in half. And, Jane, I’m surprised at you. Your father was looked after very well in Camden.”

Ms Clinton, whose father used Netherwood, has successfully campaigned twice to keep the centre open. She demanded an apology for the “deeply personal” comments, adding: “This is not about my father, it is about Netherwood.” No apology was given.

The meeting descended into chaos with protesters shouting “shame on you” and “Tory rats” at Cllr Callaghan and the rest of the councillors before all the cabinet – including leader Georgia Gould – got up and left. People with disabilities could be seen crying in the public gallery. Following huge cuts to the council’s budget from central government, Camden has put in place a plan to introduce transport charges for elderly and disabled and charge 800 Camden residents for home care support they used to get for free.

A council official told the meeting that the council would raise £3.8million from the new home care charges. Four day centres, at Netherwood in Kilburn, Raglan in Kentish Town, Charlie Ratchford Centre in Chalk Farm and at Kingsgate Resource Centre, West Hampstead, will be shut. All day centre services will move into a space in Kingsgate, under plans already agreed but due to be officially rubber-stamped next week by Cllr Gould. Claire Glasman, from the campaign group WinVisible, told the committee in a deputation: “We want a Labour manifesto in Camden. We want a compassionate budget.”

Adult social care and health chief Councillor Richard Olszewski said: “Clearly, this is not a set of proposals that gives us any pleasure. But these Tory cuts cannot be ignored. The general election result was good, really cheering. But unfortunately the Tories are still in power. We all wish we didn’t have to do this.”

He added: “Jeremy Corbyn and John McDonnell have said councils must set a balanced budget.” Camden Unison’s George Binette said before the meeting that he would be writing to the council asking for a “moratorium” on the changes because a socialist Labour government could take power in the coming months.

Outside, Ms Clinton said she had witnessed “awful behaviour” and Cllr Andrew Mennear said he expected Camden Conservatives to “call in” the Netherwood decision.