Chalcots: What was sacrificed in PFI deal to please Treasury’s penny-pinchers? 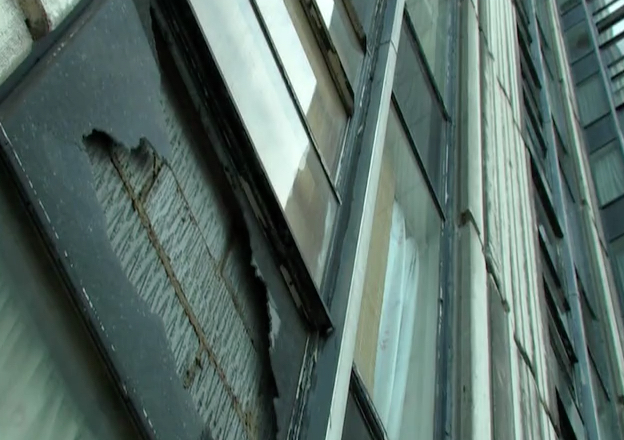 The state of the towers in 2005 before work started….as seen in the film Tower Blocked

THE private finance deal behind the refurbishment of the Chalcots estate is back under the microscope with demands to know what was cut out of the final bid to please the Treasury.

Public spending on the modernisation of the tower blocks in Adelaide Road was drastically slashed in 2005 on the orders of the then Labour government amid fears that the cost of a Private Finance Initiative was spiralling out of control.

As the New Journal reported at the time, the Treasury refused to sanction an initial bid of around £120million. A further bid of £66million was later approved several months later, but only after cut backs which are thought to include changes to the way the towers were cladded. Rydon, which has said since the Chalcots evacuation that it delivered everything the council asked for (see page 2), sealed a 15-year maintenance works deal at the estate as part of the PFI. 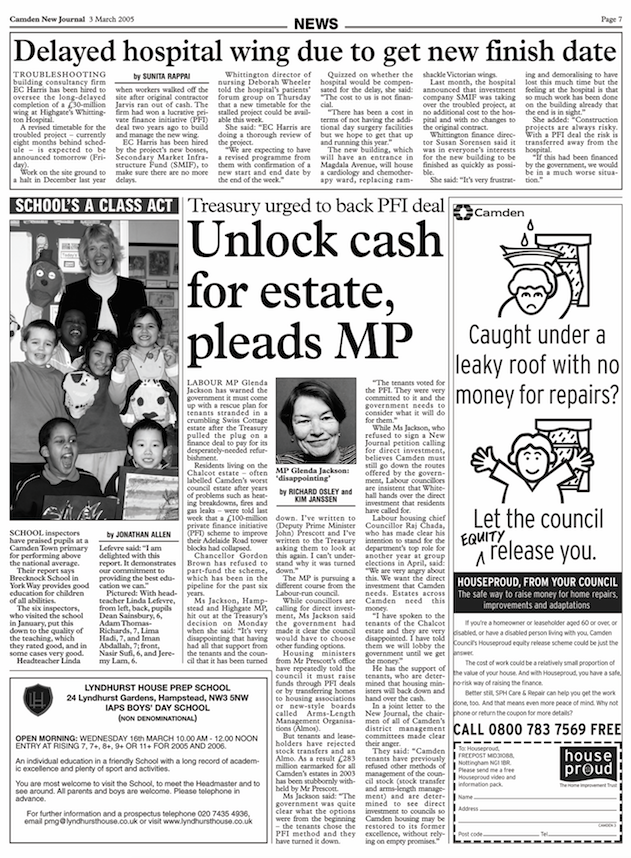 A New Journal report from 2005

With all work at the estate now set to be scrutinised, however, there were new calls this week to explain what compromises were made. While she is willing to release fire risk assessment reports for the Chalcots, Labour council leader Georgia Gould said she could not guarantee that the PFI contracts would ever be made public.

She said last night (Wednesday) she wanted Camden’s review of what led to the evacuation to be as “transparent as possible” but needed to look at what could – and could not – be legally released. She said: “I’m committing to an independent investigation into the Chalcots situation.”

Cllr Gould and the Town Hall’s communications department are not answering any direct questions on how the PFI negotiations panned out, insisting the focus must remain on getting tenants home. Even questions about everyday council policy – such as who signs off simple repair jobs – are not being answered at this stage.

Green councillor Sian Berry has drawn up a list of documents which she says Camden must release if it is serious about an open and transparent investigation – including the PFI contracts. “The full contract documentation must be released in the lead up to the inquiry, including the documents that relate to the change of spec when the plans were changed in 2005,” she said.

Belsize ward councillor Jonny Bucknell said: “It is crucial to look again at the difference between the first deal which was rejected – and what was finally approved.” It was reported in trade magazines at the time of the negotiations that there were changes to the cladding after the Treasury had rejected the deal and asked Camden to come up with a cheaper bid. A report in the Guardian newspaper in 2005, meanwhile, said the “new bid would cut further costs by using cheaper techniques for cladding the blocks – one of the priorities of the scheme”.

The rejection of the higher cost deal had proved embarrassing for the then deputy prime minister John Prescott, who had encouraged highly-rated local authorities like Camden to take part in the first PFI “pathfinder” projects, only for the Treasury to pull the plug and leave tenants asking why they were having to wait even longer for investment in their crumbling estate.

Labour council leader Councillor Georgia Gould said: “The events of the last week raise a number of major issues around fire safety, building regulation and around Chalcots PFI contract. I want to assure you that no one is more determined to get to the bottom of this than me. I believe the people of the Chalcots estate deserve answers.”

What the PFI firms say about work at the Chalcots estate?

CONSTRUCTION firm Rydon was contracted by Camden Council to carry out the refurbishment of Chalcots estate. They said: “All specification was carried out in detailed consultation with the Council and their independent advisors Faithful and Gould. The design and product selection are in full compliance with Building Regu­lations. The London Borough of Camden Building Control signed off on the work once finished. All our work meets required building regulations – as well as fire regu­lation and health and safety standards.”

THE family-run Harley Facades was contracted by Rydon to install the cladding at the Chalcots estate. Managing director Ray Bailey said: “These works were as described in the contractual specification and approved in the usual process for construction and building control by the London Borough of Camden. There is no evidence to suggest that this product and cladding system installed in Camden is unsafe. Currently there is no link between the cladding and the spread of the fire at Grenfell Tower.”

Kentish Town-based HTA was employed by Rydon. Managing partner Simon Bayliss said: “HTA were employed by Rydon as architects for the over-cladding of the Chalcots tower blocks in Camden. Camden Council were the local authority Building Control inspector at Chalcots and certified that the over-cladding was designed and constructed in accordance with the Building Regulations. Indeed, a fire at the 17th floor in one of the blocks in 2012 was contained and the cladding assembly performed as designed.