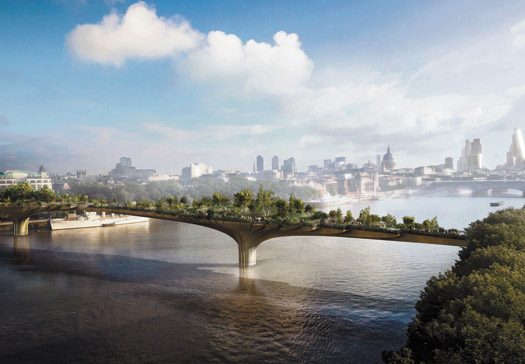 How the bridge could have looked

CAMPAIGNERS are celebrating the announcement that the “toxic” Garden Bridge project has been scrapped after more than £37million was wasted on it.

The Garden Bridge Trust, which is behind the scheme, confirmed on Monday the project had been axed, citing “a lack of support” from Mayor of London Sadiq Khan.

But campaigners have blamed the trust for acting “recklessly” and making key decisions before all the funding was in place. Some have slated former mayor Boris Johnson for backing it.

“We are happy that this toxic project has been finally laid to rest. The Garden Bridge Trust is blaming Sadiq Khan for its demise, yet if they hadn’t recklessly signed a premature £15m construction contract without all the money in place, we could have avoided a £9m cancellation fee which has to be borne by the public.

“The Garden Bridge Trust have only them- selves to blame for this shambles. They have acted recklessly with our money and still haven’t provided a full itemised breakdown of public funds used to date.”

She added that Mr John- son and former chancellor George Osborne were also to blame for “shamefully and unilaterally backing the project”.

Labour councillor David Boothroyd said: “Boris Johnson takes the lion’s share of the blame, but George Osborne also has some questions to answer about why central government pledged money towards it.”

Cllr Boothroyd, who was on Westminster Council’s planning com- mittee and voted against the bridge project, said there were “fairly obvious

flaws” from the start.
The council, who own the land outside Temple station where the bridge would have landed, called in a decision to hand over the space to the trust earlier this year, to ensure “transparency” and “value for money”.
In April, a damning independent review headed by Dame Margaret Hodge, former chair of the public accounts commit- tee, concluded that the bridge should be scrapped.

Garden Bridge Trust chair Mervyn, Lord Davies of Abersoch, said they were “incredibly sad” to call it a day, adding: “We had made great progress, obtaining planning permission, satisfying most of our planning conditions and we had raised £70m of private money towards the project.

“The Garden Bridge would have been a unique place; a beautiful new green space in the heart of London, free to use and open to all, showcasing the best of British talent and innovation.

“It is all the more disappointing because the trust was set up at the request of TfL (Transport for London), the organisation headed up by the mayor, to deliver the project. It is a sad day for London because it is sending out a message to the world that we can no longer deliver such exciting projects.”

Council leader Nickie Aiken said that she welcomed “the end to the uncertainty” surrounding the future of the project.

And in a statement, Mr Khan said: “I have been clear since before I became mayor that no more London taxpayers’ money should be spent on this project and when I took office I gave the Garden Bridge Trust time to try to address the multiple serious issues with it.

“Londoners will, like me, be very angry that London taxpayers have now lost tens of millions of pounds – committed by the previous mayor – on a project that has amounted to nothing.”