'Drug dealer' shot in side street

Flowers at the site of the shooting in Kilburn

POLICE used CCTV cameras to track a 15-year-old boy from his home to a side street in Kilburn where he is accused of shooting and killing a “small-time drug dealer”, a jury has heard.

The teenager, who cannot be named because of his age, was driven by two adult accomplices to the scene, where he is alleged to have shot 21-year-old Yasir Beshira with a handgun on December 8 last year. CCTV footage played at the Old Bailey showed Sammi Tesfazgi, 21, from West Hampstead, and Rilind Tahiri, 22, of Islington, picking up the boy in a stolen Range Rover.

They were then spotted on cameras as they made the two-mile journey to Kilburn High Road, where the boy left the car and walked onto the Webheath Estate. The prosecution alleges that Mr Tahiri and Mr Tesfazgi waited in the car, which was parked in nearby Netherwood Street, while the teenager walked into Palmerston Road and hid next to a bin beside a branch of Nandos, before shooting Mr Beshira in sight of stunned shoppers at around 5.20pm.

Jane Hosang, who was passing the scene when she heard a shot ring out, told the court: “It was like a firework. I looked to [Palmerston Road] and I said to my friend ‘he was shot’. “I looked behind and the guy was falling. His friend tried to help him to stand. He tried, but he couldn’t.”

The court was told Mr Tesfazgi had received a text message seven minutes before the killing and “cell site analysis” had proved he was near the murder scene.

Prosecutor Brian O’Neill QC said: “At the time of the murder of Yasir Beshira these three defendants and that Range Rover, it is proven by the CCTV evidence and now further supported by the cell site evidence, were in the immediate vicinity of where the killing took place.” 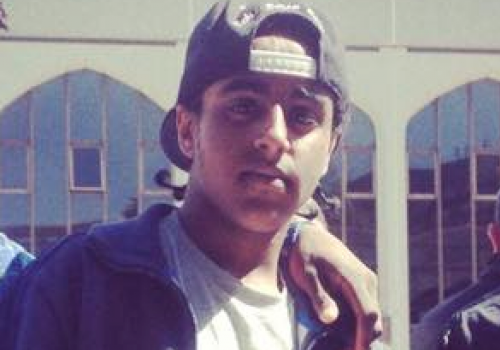 Witnesses to the shooting described a suspect with his face covered running from the scene. The court heard that on the day the boy was wearing a distinctive coat with a bright yellow logo and Adidas trousers with their trademark three stripes, which was picked up by security cameras.

Playing CCTV footage from the Webheath Estate, Mr O’Neill said: “It is possible to identify the distinctive yellow logo on the sleeve of the jacket he was wearing and possible to make out the Adidas stripes on his tracksuit bottoms.” It is alleged that after the killing, the three defendants drove away and disposed of the gun and clothing, before torching the stolen vehicle.

The court had earlier heard that Mr Beshira, known as “Loopy”, was a “small-time drug dealer” working as a “runner” for an organised drug network. But in the days before his death, the court heard, Mr Beshira had let it be known that “orders for drugs could now be placed with him directly”. Mr O’Neill told the jury: “It may well be the case that it was his decision to go it alone that led to him being murdered.”

Mr Beshira was shot once in the chest, with the bullet passing through his stomach and exiting his lower back. He made it a few metres before collapsing outside Ellie’s Café in Kilburn High Road, where he died. The teenager, who is now 16, Mr Tesfazgi and Mr Tahiri all deny charges of murder. The trial continues.