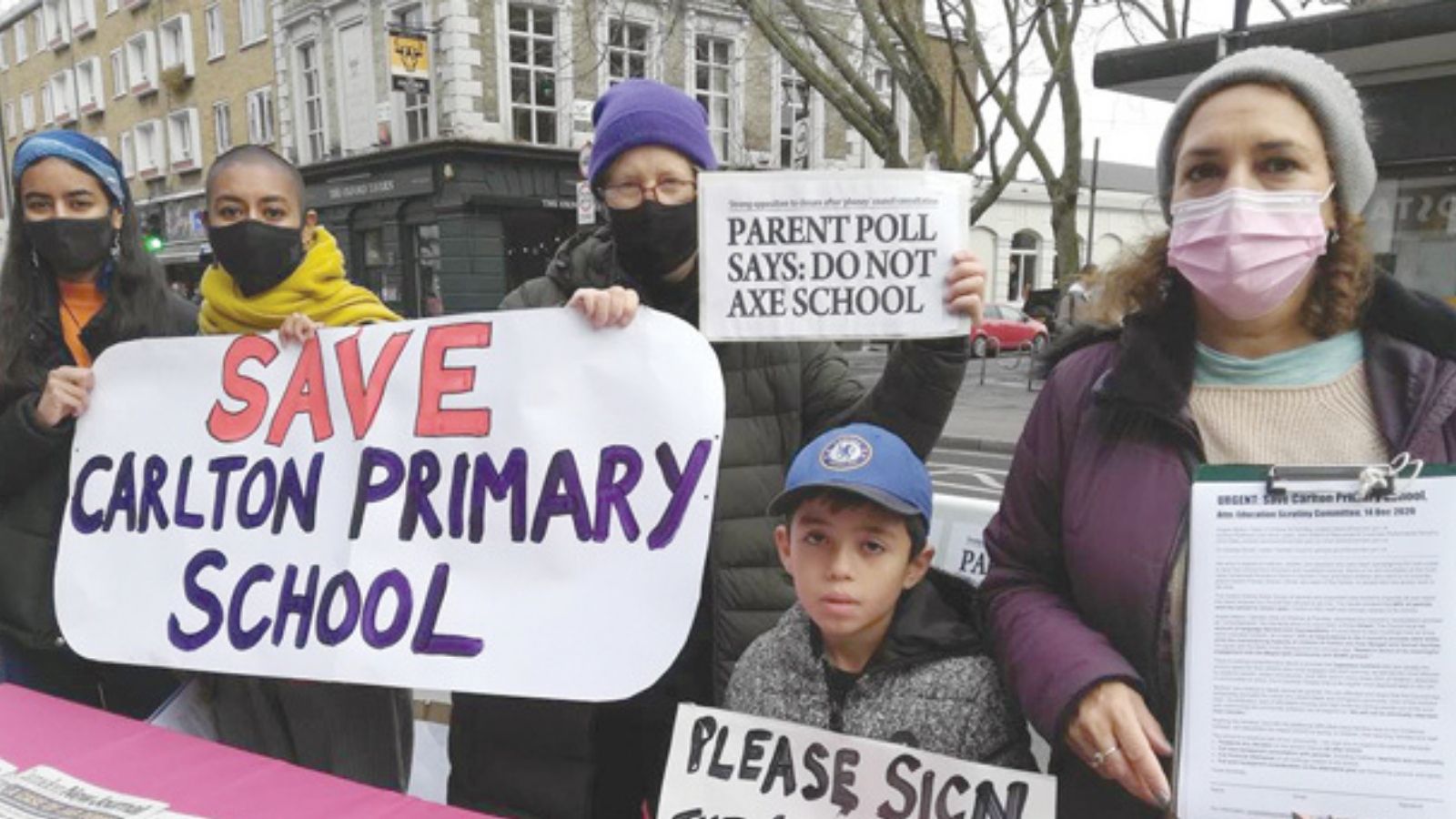 Shoda Rackal, right, joins the campaign to stop Carlton School from being closed down

A MOTHER who campaigned to stop her son’s school from closure is facing a nervous wait to see if he has got a place elsewhere.

Shoda Rackal – who was at the forefront of the campaign to save Carlton Primary School in Gospel Oak – does not have a place secured despite term starting on September 2.

She is hoping nine-year -old Max will be accepted by Fitzjohn’s Primary in Hampstead.

Ms Rackal said: “We’re just in limbo and waiting to hear. It feels like we’re being targeted because of the campaign. I’m pretty anxious and angry at being treated like this by the council and they have the responsibility to get kids in the school that they want to be in.

“At the moment he’ll be sitting at home when term starts. He keeps on asking me ‘What school am I going to, mum? Have I got a school yet?’ They’ve managed to find children places at other schools, and putting a bulge class in Rhyl, but can’t find one place for my son.”

Places had been offered to parents for children to attend the merged school at the Rhyl Primary site, but Ms Rackal wants to get him into a school closer to their home.

A decision was taken to shut Carlton in Grafton Road in March after Camden Council said a fall in pupil numbers meant it was no longer financially viable.

The school had served generations of families in Queen’s Crescent and Gospel Oak. Ms Rackal added that she was concerned about the impact on her son after two years of disrupted education, as Max, a keen footballer, goes into Year 5 and will be moving into secondary school in September 2022.

Ms Rackal said: “It’s really cruel and unfair on him. He’s the only one going there from Carlton and he’ll need time to settle in. We’ve all heard recently about the impact on GCSE and A-level pupils from lockdown but it’s the younger ones too who have also struggled.”

Admissions to state schools in Camden ahead of the new school term, known as in-year admissions, is managed by the schools, with oversight by Camden Council. The fall in pupil numbers has also affected secondary schools with some consulting on cutting staff numbers.

Rob Earrey, headteacher at Fitzjohn’s said: “Like all Camden community schools, we follow Camden’s admissions policies. Fitzjohn’s has a maximum size of 30 children per class and we follow the admissions code strictly as we have waiting lists for each year group.

“The vast majority of ‘in-year’ places are offered under the distance criteria. Should places arise over the summer we deal with those when school reopens in September. Rhyl is a wonderful school (as are all Camden primary schools) and I would always advise parents to take a place that is offered.”

“There are other schools in the borough with places still available for the new term and we would urge any parent who remains concerned about their offer to contact the admission service as soon as possible.”

DETAILS about a planned community hub on the Carlton School site remain thin on the ground months after it was shut down, writes Harry Taylor.

The Victorian school building in Gospel Oak was supposed to be turned into a facility for the area, which would include early-years care, parental support, adult education, crime support and potential co-working spaces.

Midwives and health visitors would also be on site to advise parents. The New Journal was told an announcement would be made in April, but months later no firm plans have been unveiled.

Peter Ptashko, a governor at Rhyl Primary School and at Carlton before it closed, is part of a taskforce to come up with ideas and funding for the facility.

The group was accused of making decisions behind closed doors after consulting the local Labour branch on its plans before they were made public. Builders have been on site in recent weeks to replace windows and clear the school building.

Camden’s education chief, Councillor Angela Mason said: “The council has been working closely with both Rhyl and Carlton Primary Schools, as well as relevant services and the local community, to develop a community hub on the site of Carlton school.

“Building on a strong tradition at both schools of working closely with families, Rhyl is also hoping to pilot a range of activities in response to the needs and aspirations of the school community from the autumn.”