Carer is wed on his doorstep in final days 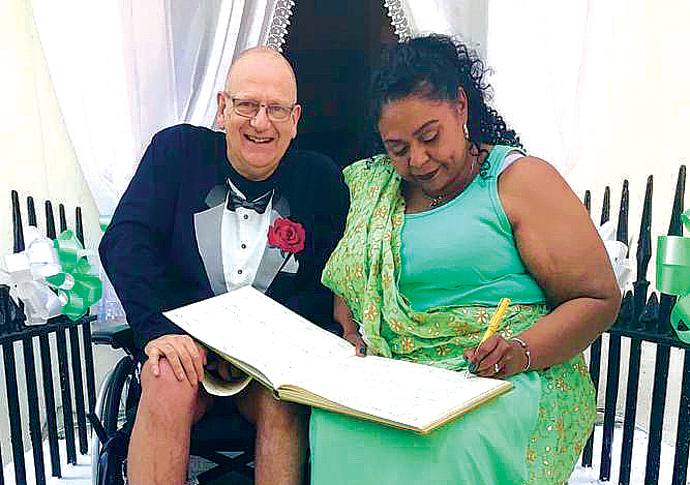 WHEN he was told he had only weeks to live, Steve Reading had a final wish to fulfil – to marry the love of his life, Carol.

After obtaining special dispensation to do so from the Archbishop of Canterbury, due to the coronavirus lockdown, the couple tied the knot on the doorstep of their home in Milner Square, Angel, accompanied by their three children and cheered on by friends and neighbours.

Little over a fortnight later, on May 11, Steve, an elderly care expert, died from motor neurone disease, aged 59.

“I have lost an absolutely amazing man,” said grieving Carol. “Steve was the kindest, most patient, most compassionate human being you could ever wish to meet.

“He worked in caring roles all his life and this reflected the kind of person he was.”

Only a handful of such weddings have taken place over the past eight weeks after gatherings were stopped at the end of March.

Steve, a service manager for the Alzheimer’s Society’s east London division, had only been diagnosed with the disease in April after experiencing increasing mobility problems.

“Steve had always been super-fit and was a keen cyclist and walker,” said Carol. 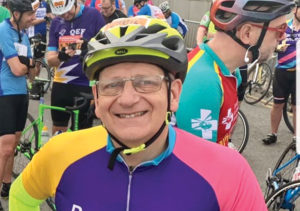 Steve Reading, who was 59, died of motor neurone disease earlier this month

“In 16 weeks he went from walking 20,000 steps a day to only being able to manage five, then ending up in a wheelchair.

“He was eventually admitted to hospital and discharged 48 hours later with a palliative care package. But he was philosophical about it and embraced death in the same way as he embraced life.”

The couple met 24 years ago at the Charlie Ratchford Centre, a day centre for the elderly in Camden, which Steve managed while Carol worked there as an office temp.

“We began dating after I left the job and were together for 23 happy years,” she said.

They went on to have a daughter, Naomi, now 18, to add to Carol’s two children, Nathan and Niketa, from a previous relationship.

“Steve had proposed to me four times but I kept putting him off – I just didn’t want all the fuss of a wedding,” said Carol.

“However, I relented and we had planned to get married next year on a beach in Mauritius, where I come from. In the end we got married on our doorstep.”

The April 24 ceremony was conducted by Caroline Shuttleworth, curate of St Mary’s Church in Upper Street. Carol expected it to be a low-key affair because of the lockdown.

“But when I stepped out of my door I was amazed to find the entire square decorated and people spread out on their steps cheering,” she said.

“It was very romantic and emotional – everyone was crying. Steve loved it and was grinning like a Cheshire cat.”

Raised in Eastbourne and the third of four children, Steve qualified as a psychiatric nurse in 1985 before specialising in work with older people. In 1993 he joined the Charlie Ratchford Centre, going on to win recognition for his improvement of its services and receiving Camden Council’s Outstanding Team Award in 2002.

In 2012 he was appointed dementia support manager for the Alzheimer’s Society and was London winner of the Great British Care Awards for Frontline Leaders in 2016.

In June last year he was tasked with providing managerial support for Alzheimer’s Society services in the City of London, Hackney, Tower Hamlets and Newham.

Steve died peacefully at home in the arms of his family, said Carol, who paid tribute to the community and medical services who had rallied round in support. His funeral is to be held on June 5 at Islington Crematorium.