'It was amazing how quickly it became a really big fire', say witnesses. 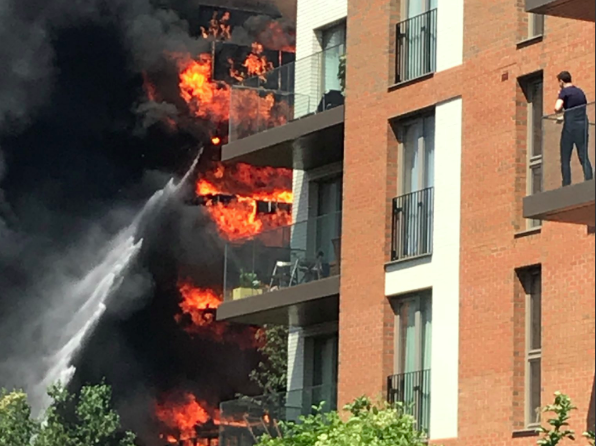 Witnesses said it looked like a “bomb had gone off”. Photo: Kirsten Levermore

FIREFIGHTERS have battled to put out a dramatic blaze at a block of flats in West Hampstead today (Tuesday).

Emergency crews were in the Orwell block of the recently-built Ballymore development in Heritage Lane. At least four flats looked like they had been damaged.

Witnesses said it has destroyed the balconies, but it is unclear if the inside of the properties are also damaged.

The fire brigade said they have sent eight engines and 35 firefighters to the scene.

Kirsten Levermore, who was on her way to work when she was the fire, said: “There’s loads of smoke, it looks like armageddon. The balconies are just gone and it looks like it’s four or five flats.”

“The ground floor is hidden from view, but it looks like it started right at the bottom of the building and burnt its way up. It’s one vertical column.The doors are completely burnt out. It looks like a bomb has gone off.”

She said it was unclear if anyone was in the flats at the time, but there appeared to be garden furniture on some of the balconies.

Witness Tim Gordon, who lives nearby, said: “I saw the fire had started on the lower floor balcony. It was a small fire, I could have put it out myself. But it caught the wind, there’s a bit of a wind tunnel there and it went up the building.”

He added: “It was amazing how quickly it became a really big fire. The firefighters were getting annoyed because there was a problem with the water pressure. People were streaming out into West End Lane.” 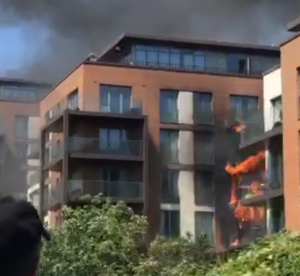 Hans Friedman, who lives in the block, told the New Journal: “I thought it was just a barbecue at first. I could hear the smoke alarm but it was kind of in the background ringing. I wasn’t really paying attention.  Then I saw the fire from my balcony and I rushed down past the flat where the fire started. I don’t know – it looks like a lot of damage. I don’t know what will happen with the insurance.”

He added: “My girlfriend is coming to stay for two weeks tonight from the Czech Republic. I’m not sure what we’re going to do. It’s too early.”

The London Fire Brigade said that “three balconies are currently alight,” adding: “The cause of the fire is not known at this stage.”

Ballymore said in an update this afternoon (Tuesday): “We can confirm today’s fire at West Hampstead Square has been put out, with no reported injuries. Residents’ safety is our top priority, we’re working closely with them and emergency services to ensure their security and temporary accommodation.”

Film by David Brescia, from the West Hampstead Neighbourhood Development Forum. He tweeted: Serious-looking fire at one of the Ballymore buildings behind West End Lane. I hope everyone’s okay.

Hampstead and Kilburn MP Tulip Siddiq said: “I’d like to thank the London Fire Brigade for their extremely quick response to today’s fire. I hope that residents are safe and not too badly affected by seeing the impact of the fire on their homes. At least eight fire engines and more than 50 firefighters from three different fire stations were on hand in minutes to deal with the fire that seems to have been limited to exterior balconies.”

She added: “They contained the blaze in less than an hour and I want to thank them for their absolute professionalism in the face of a difficult challenge – the type of which they face on a daily basis. The safety and wellbeing of Hampstead and Kilburn residents is my priority, and I would advise those who may be directly affected or concerned about the fire to get in touch.”