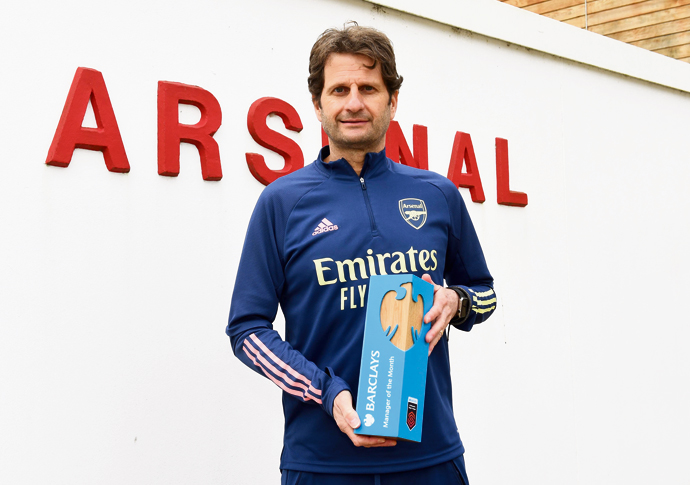 Joe Montemurro with his WSL manager of the month award

ARSENAL boss Joe Montemurro has dismissed a report suggesting there are issues at the club, insisting that a review of the women’s side is “normal” and will be beneficial.

Speaking to the media after a 10-goal mauling of Gillingham in the FA Cup fourth round on Sunday, Montemurro was quizzed on an article in The Athletic which raised apparent concerns over facilities and staffing.

Montemurro also told us he was giving his input into a review of the women’s set-up that was revealed by chief executive Vinai Venkatesham after the Australian had announced his departure.

“It’s really important for us to make sure that we use these opportunities to get better because the game is growing quickly and what we were doing three, four years ago, now doesn’t work,” he added. “So we now need to look at how we make things better and how we get better as an organisation. For me it’s normal and we wouldn’t be a high-performance organisation if we didn’t review our practices.”

Arsenal’s performance against National League side Gillingham at the weekend attracted more than 320,000 views on the club’s Twitch live stream.

Fans witnessed a glut of goals, including one from Vivianne Miedema on her 100th appearance and a first from Anna Patten. Also on the scoresheet were Jill Roord (3), Beth Mead (2), Jordan Nobbs, Kim Little and Danielle van de Donk.

Spurs marched on in the FA Cup, too, courtesy of Jessica Naz’s extra-time winner over Reading. Alanna Kennedy and Rachel Williams also scored in the 3-2 victory.

Tottenham are back in league action on Sunday, facing Man United, while Arsenal host Brighton. Both matches are on the FA Player. The Gunners’ WSL clash with West Ham on Wednesday is on the BBC Red Button.

Hayes at the ready

The first leg of Chelsea’s Champions League semi-final with Bayern Munich kicks off in Germany on Sunday.

And even though the must-win match comes hot on the heels of last night (Wednesday’s) potential WSL title decider against Manchester City, manager Emma Hayes wants it no other way.

“I would hate to be sitting at home and watching somebody else playing in the Champions League semi-final. We’re ready for Sunday,” said the Camden-born coach, who oversaw the Blues’ 5-0 FA Cup win over London City Lionesses last Friday.