Back on the ball: praise for Haverstock’s team spirit 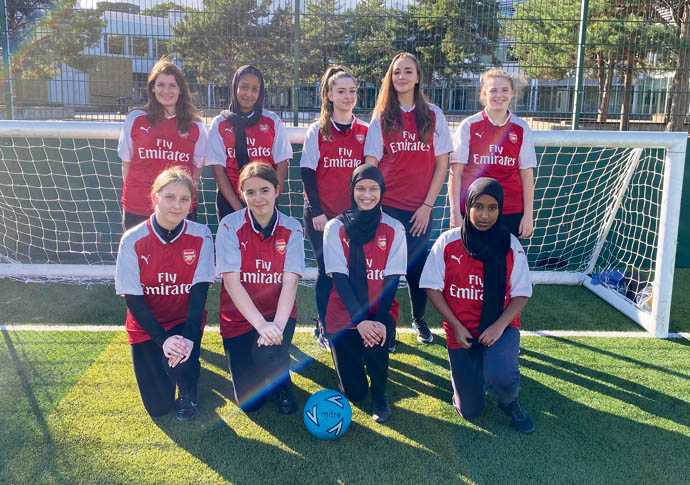 THERE has been no shortage of skills, thrills and goals since Haverstock School’s Year 9 and 10 girls returned to the pitch.

The footballers (pictured) played two tough fixtures – against Parliament Hill and Regent High – in the Camden Shield at their home pitch in Chalk Farm on Wednesday.

Kitted out in Arsenal colours, there were mixed fortunes for Haverstock as Courtney Dillon and Naima Noor both bagged a brace in a 7-4 loss against Parliament Hill.

Sharp-shooter Dillon then scored four more goals, while Jolina Bashkurti and Erona Syla were also on target, in a 7-1 victory over Regent High.

Following “what feels like forever”, Haverstock’s girls returned to action after the lockdowns at the end of September, with their opening match against Maria Fidelis.

Dillon was again the star of the show with a hat-trick, including a nutmeg on the goalkeeper and a fantastic effort from the halfway line.

Bashkurti was also again on the scoresheet, with a deflected goal from a throw-in, while Rebecca Stamp scored an absolute rocket on the half-volley in a 6-1 win.

Haverstock PE teacher Annie Liddiard said: “Well done to all the girls. It is amazing to see the students back and taking part in extra-curricular activities after a very challenging year.

“The girls worked extremely hard and performed fantastically as a team.”