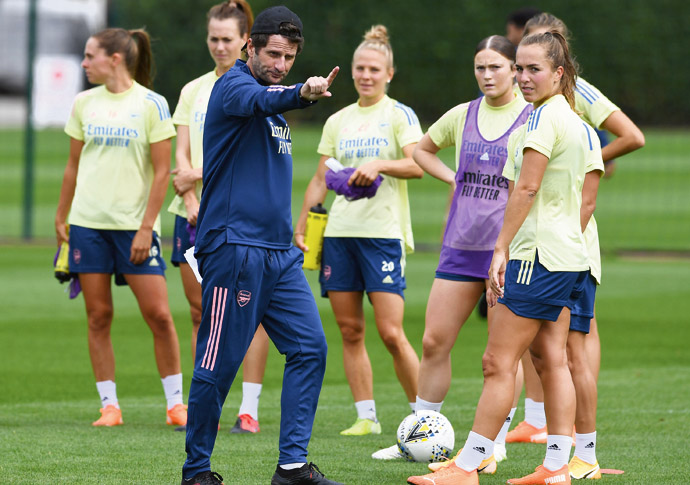 Joe Montemurro, who became Arsenal manager in 2017, is set to leave at the end of the WSL season. Photo: Arsenal FC

THE search is on for a new Arsenal manager after Joe Montemurro made the surprise announcement that he would be leaving at the end of the season.

The 51-year-old Australian said he feels the time is right to move on as he wants to “reboot” and spend more time with his family after nine years without a break.

He added that he had made the decision in February, but told the players after training yesterday (Wednesday) in a “teary” meeting.

He does, however, believe that his team will not let emotions get in the way as they chase third place in the Women’s Super League and with it a Champions League spot next season.

“One thing that’s certain is we have a professional group of players that understand what their roles and professional responsibilities are,” he said.

“We are in a good space and we know they are playing for an important position in the league, for the club to finish on a high, and I’d like to hope they want to give me a good send off.”

Montemurro joined Arsenal from Australian side Melbourne City FC in 2017 and within two years had brought the League Cup and Women’s Super League titles to north London.

The lifelong Gooner, who admitted that he had experienced a “rollercoaster of emotion” since announcing his decision, spoke movingly of his love for the club, saying he had been “starry eyed” on some days at work.

He also praised the fans, adding: “They are amazing, they are the reason why we do what we do. I want them to be positive going forward and I want to thank them for the support, the wake-up calls, the good times and being there during the bad times.”

Covid-19 rules may have kept the supporters out of the Tottenham Hotspur Stadium on Saturday as Spurs and Arsenal haggled over derby day bragging rights.

But battling it out on the pitch were several players who have been die-hard fans since childhood: Arsenal centre-backs Lotte Wubben-Moy and Anna Patten, and Spurs right-back Esther Morgan.

Goals from Caitlin Foord, Vivianne Miedema and Katie McCabe saw the Gunners depart with all three points – their fourth WSL win and clean sheet on the bounce.

And while the result may not have sat well with Morgan, who saw her first match at White Hart Lane aged five, the 18-year-old later took to social media to describe the experience of playing in the stadium as a “dream come true”.

It was a sentiment echoed by 22-year-old Wubben-Moy, who has fond memories of walking from her auntie’s house in Islington to cheer on her heroes in the Arsenal men’s team as a youngster.

“It was thrilling,” she said. “To be in a stadium of that magnitude gets the adrenaline going, let alone it being a north London derby.

“So the occasion was doubly exhilarating.

“Then to win, well, it’s just the contents of dreams.”

Chelsea boss Emma Hayes was purring as we went to press last night (Wednesday) after her players dismantled German giants Wolfsburg 3-0 – and 5-1 on aggregate – to reach the semi-finals of the Champions League.

A Pernille Harder penalty and goals from Sam Kerr and Fran Kirby saw off the team that has knocked Chelsea out of this competition three times in the past.

Hayes’ charges are back in WSL action on Sunday when they host Birmingham City. Spurs face Manchester City and Arsenal are away to Bristol City. All matches are on the FA Player.