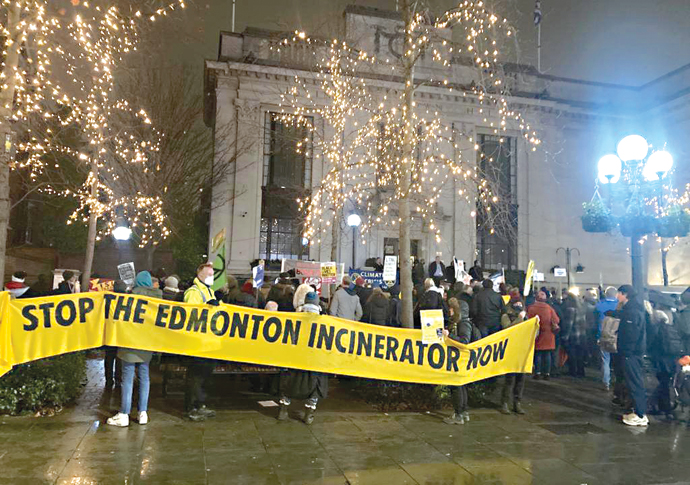 Another demonstration was held before last night’s full council meeting

Protesters said the support “undermined the credibility of climate emergency declarations” previously made by the Town Hall.

Neighbouring Haringey Council has called for a brake on the project to review the wisdom of building the new larger plant in Edmonton.

Seven boroughs signed up to the North London Waste Authority are working on it.

Demonstrators had banged drums and chanted before the last full council meeting of the year.

The chamber’s only Green councillor, Caroline Russell, then submitted a motion calling for a similar “pause and review” approach – but her text was “wrecked” and turned into support for the scheme by Labour amendments.

The current burner will be knocked down and a new one capable of incinerating 700,000 tonnes of waste a year will be built.

Environmental critics say this will lead to worsening air pollution with Cllr Russell warning that so-called “carbon capture” technology does not yet exist in any meaningful form to mitigate harmful effects.

Environment chief Cllr Rowena Champion took a red pen to Cllr Russell’s motion, crossing out every single word and suggesting her own “amendment”, calling on the council to welcome the incinerator as “a green solution for Islington’s waste”.

Cllr Russell looked visibly exasperated as the edits were passed.

She told the chamber the Edmonton incinerator amounted to “environmental racism” because it was based in one of the country’s most deprived, racially diverse areas. Some Labour councillors could be seen shaking their heads in disagreement at this comment.

She said the council was making the decision to back the incinerator in “good faith”.

Labour councillor Gary Heather spoke in support of the new incinerator plans, adding that councillors “have a responsibility to manage our waste”.

He said that while “there needs to be a paradigm shift on recycling,” the current incinerator plans were “the only workable solution there is”.

Cllr Heather added: “‘Pause and review’ is an excuse to do nothing” that amounted to “kick[ing] the can down the road” and “putting your head in the sand”.

Haringey is also run by Labour councillors, but voted last week to call for the pause.

Only Cllr Russell and Tory councillor Rakhia Ismail abstained as the amended motion was passed.

Cllr Russell said afterwards:“I think it was inevitable and I just hope that they really think about the implications of what they’re building and that they take every opportunity to minimise the amount of stuff that gets burnt.”

Support for the incinerator is not completely shared among all Labour members.

“Councils supporting the project have undermined the credibility of their climate emergency declarations and targets.”

He added: “They don’t seem to understand what a climate emergency really means or the urgency for change, so they are ill-equipped to face it adequately.”

Peray Ahmet, leader of Haringey Council, said last week that the “environmental concerns of residents” needed to be taken into account before the project went further.