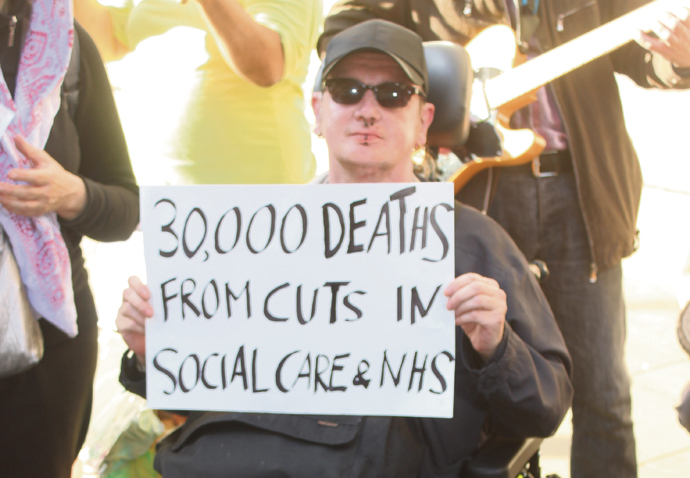 Disabled protesters gathered outside the Town Hall earlier this week

THE horrific fire in West London yesterday (Wednesday) should concentrate the minds of local authorities and the government.

For several years tower blocks have been “dressed” and made more pleasing to the eye with different forms of cladding. Though it is far too early to find cladding responsible for the spread of the fire, there is little doubt that a question mark hangs over this aesthetic skin.

What is certain is that like any building system it requires careful scrutiny and regulatory control – and as this costs money it is exactly where the problem begins. Government cutbacks have bitten into necessary controls. Even essential services such as policing and fire services have been cut back because of the Conservative government’s “austerity” programme.

These biting economies have made running Camden almost impossible. Labour is trying to do its best – some of its policies are imaginative and effective, others such as the closure of the Netherwood in West Hampstead do not appear to have been thought through.

Following the election debacle, of course, all signs point to the fact that the very “austerity” policy the government argued was essential if the British economy were to become better balanced, will now be jettisoned along with the threats to the pensioners’ “triple lock”, the freedom pass, the dementia tax, the large-scale reintroduction of of grammar schools, the bedroom tax and the downward slide of the NHS.

All are likely to go in order to enable the Conservatives to re-establish themselves as the only party the electorate can trust to run the economy.

A satirist could not have dreamed it up.

Jeremy Corbyn, now more statesmanslike than he has ever been, will harry the government in an attempt to bring it down. Its alliance with the DUP may, as John Major warns, bring violence to Northern Ireland.

But the financial elite would never countenance an early election that could usher in a reforming Corbyn government, especially as it would raise corporation tax. This is Corbyn’s dilemma.

While the idea of a progressive alliance between the Lib-Dems, Greens, SNP and Labour is now off the electoral boil, it is surely the only long-term course Corbyn should consider taking.

Loosely bound together they would form a formidable political enterprise.