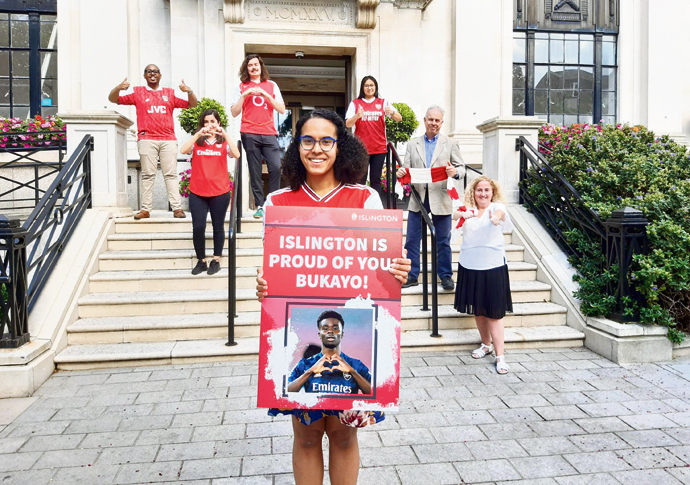 Councillor Kaya Comer-Schwartz, who has written to social media giants urging them to act over the vile racism suffered by England’s Euros stars, shows solidarity with Arsenal ace Bukayo Saka outside the Town Hall

ISLINGTON’S council leader has written to the heads of the big social media companies with an “enough is enough” message over the racial abuse faced by England’s footballers.

The Town Hall had been ready to shower the local hero of the team, Bukayo Saka, with congratulations for his part in the squad that reached the final of the European Championships.

But the sour end to the tournament on Sunday, which saw the 19-year-old Arsenal player sent a torrent of online abuse after missing a penalty as England lost to Italy, has meant Councillor Kaya Comer-Schwartz has also been demanding action to stop the discrimination.

In open letters to Mark Zuckerberg, the chief executive of Facebook, and Twitter’s top boss Jack Dorsey, she said: “As black people, we deserve better. We deserve to be able to go about our daily lives without fear of being sent racial abuse, for no reason other than that we exist.”

She added: “I implore you to take action, to automatically remove the offending comments and remove the people posting them from your platforms. We need change now.”

There have been growing calls for the companies not to tiptoe around the issue and end anonymous accounts being able to send vile messages. 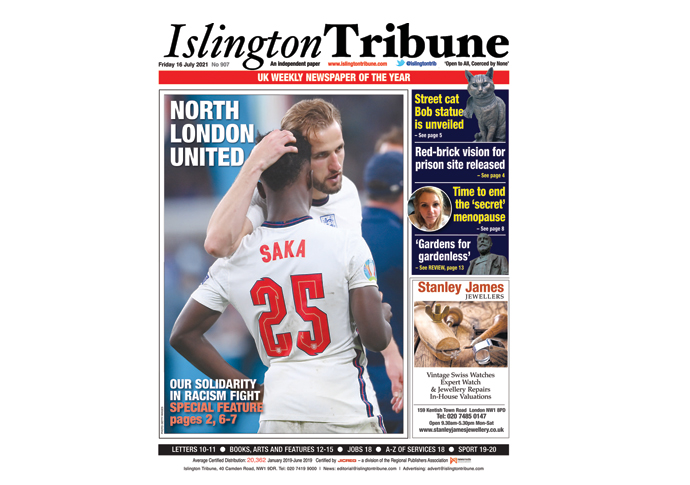 The Tribune is today (Friday) running a special front page (above) and inside features as a mark of solidarity with those who are still facing abuse – more than 12 months on from the racial injustice protests seen in London last year.

And anti-racism campaigners are planning a demonstration at the Emirates Stadium tomorrow (Saturday) from noon.

Cllr Comer-Schwartz said last night (Thursday): “Bukayo Saka has made himself a hero across the country in recent weeks with his performances at Euro 2020.

“He has lit up the tournament on and off the pitch and has such a bright future ahead of him. However, the horrific racist abuse faced by some members of the team on Sunday night has left a scar on the tournament and its legacy.”

She added: “It’s unacceptable that social media platforms allow racist abuse against black people to continue, day after day, even when it is happening in plain sight and is called out again and again.”

The council leader also questioned government ministers’ refusal to condemn booing of the symbolic “taking the knee” before England’s matches.

Andy Strouthous, a Gunners season ticket and a member of the Arsenal Independent Supporters Association, is helping to organise the protest.

“I was sickened, absolutely sickened and my heart goes out to all the players involved. It was just so awful and so disgusting,” he said.

“As soon as the whistle went, you knew it was coming. But the way the players stuck together and the way they took the knee was marvellous.

“They did it in the face of a government that was not only not supporting but undermining what the players were trying to do.”

He added: “I think there is a majority of shock and horror, but if we don’t actually act, the watershed is not going to happen on its own. I think fans and the rest of society have really got to come out and protest and keep this protest up.”

• Islington Council has emphasised its commitment to a Challenging Inequality Strategy. To find out more, if you have ideas for action or if you just want to talk or share your experience, email equalities@islington.gov.uk

Residents’ messages of support for Saka

RESIDENTS have come together to write a book of praise for Bukayo Saka, writes Constance Kampfner.

More than 100 messages of support have been posted by members of the Facebook page “Islington Community Group” for the midfielder who suffered racist abuse following England’s Euros defeat on Sunday night.

They will be gathered into a book that fans hope will be delivered to the footballer.

“I really wanted to show the other side of not just our [Islington] community, but also the online community,” said Frankie O’Brien, 25, who runs the group and whose idea it was to collect residents’ thoughts.

“I wanted to prove that we, the local community in Highbury where he plays, back him regardless of what happened on Sunday.

“He’s played his heart out for his country this past year and he helped to drive Arsenal forward when they were having a bad time.”

Mr O’Brien added: “He didn’t deserve that, no one deserves that. Racism is unacceptable and we need to be stricter about it on social media platforms.”

Messages commending the young footballer – who joined Arsenal’s youth team at the age of seven – began flooding in on Monday following the final.

“How I wish I could hug Bukayo Saka right now,” declared one fan.

“Throughout the tournament Saka has grown and developed into a man, and remember he’s only 19!”

Mr O’Brien said he has had an offer from an Arsenal-supporting bookshop who are offering to print the book for free and he is encouraging anyone with a message for Mr Saka to get in touch in the coming days either through Facebook or by emailing islingtoncommunitygroup@gmail.com