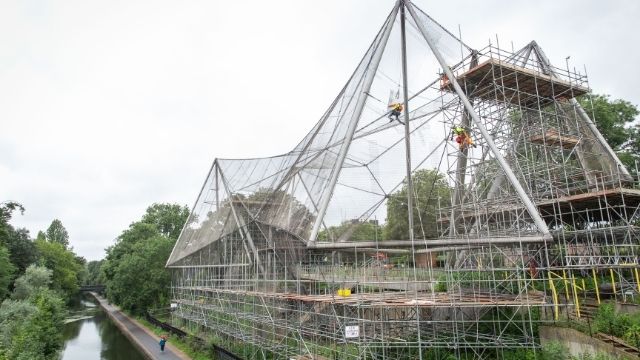 ABSEILERS were climbing down the famous Snowdown Aviary at London Zoo today (Friday) as work continues to turn the 50-year-old structure into a home for monkeys.

WATCH: work on the Snowdon Aviary

They were carefully peeling away the first of 200 mesh panels wrapped around the grade-II listed building. It will be turned into a new enclosure for a troop of Eastern black and white colobus monkeys.

The zoo said it will be renamed ‘monkey valley’ and is due to open next summer. The aviary, next to the canal near Regent’s Park, dates back to 1965 and is considered a design gem.

ZSL London Zoo’s Director of Fundraising and Engagement, James Wren said: “It’s incredible to think that this piece of architectural history has now been seen in its present form on the Primrose Hill skyline for the last time.

“Taking down the first 25metre tall panel was no small feat for everyone involved today and it will take  up to a month of further careful work for the remaining panels to be removed.”

Following the renovation, which will include the careful replacement of over 3800 sqm of mesh, the famous peaked silhouette of the historic structure will be fully restored to the London skyline, taking the same size and form as the original.

The new panels has been chosen with the colobus monkeys’ needs in mind but is also closer to architect Cedric Price’s original vision for the structure; in the 1960s, Price’s plans called for a steel that had both tensile movement and flexibility, which did not exist at the time.

“The original rigid steel mesh panels will be replaced with an exciting new – and more flexible – material, which the agile colobus monkeys will easily be able to climb on and jump from,” said Mr Wren.

“We’re excited to get to work on this ambitious and sensitive restoration project, which will breathe new life into a truly iconic structure – part of the capital’s history for more than 50 years.”

Inspired by the movements of flying birds, the Snowdon Aviary was  unique for its time; conceived by Lord Snowdon and realised by architect Cedric Price with structural engineer Frank Newby, it was pioneering in its use of aluminium and tension for support and was Britain’s first walk-through aviary when the exhibit opened in 1965.