A riot or a raid? Ten years on from that night of mayhem 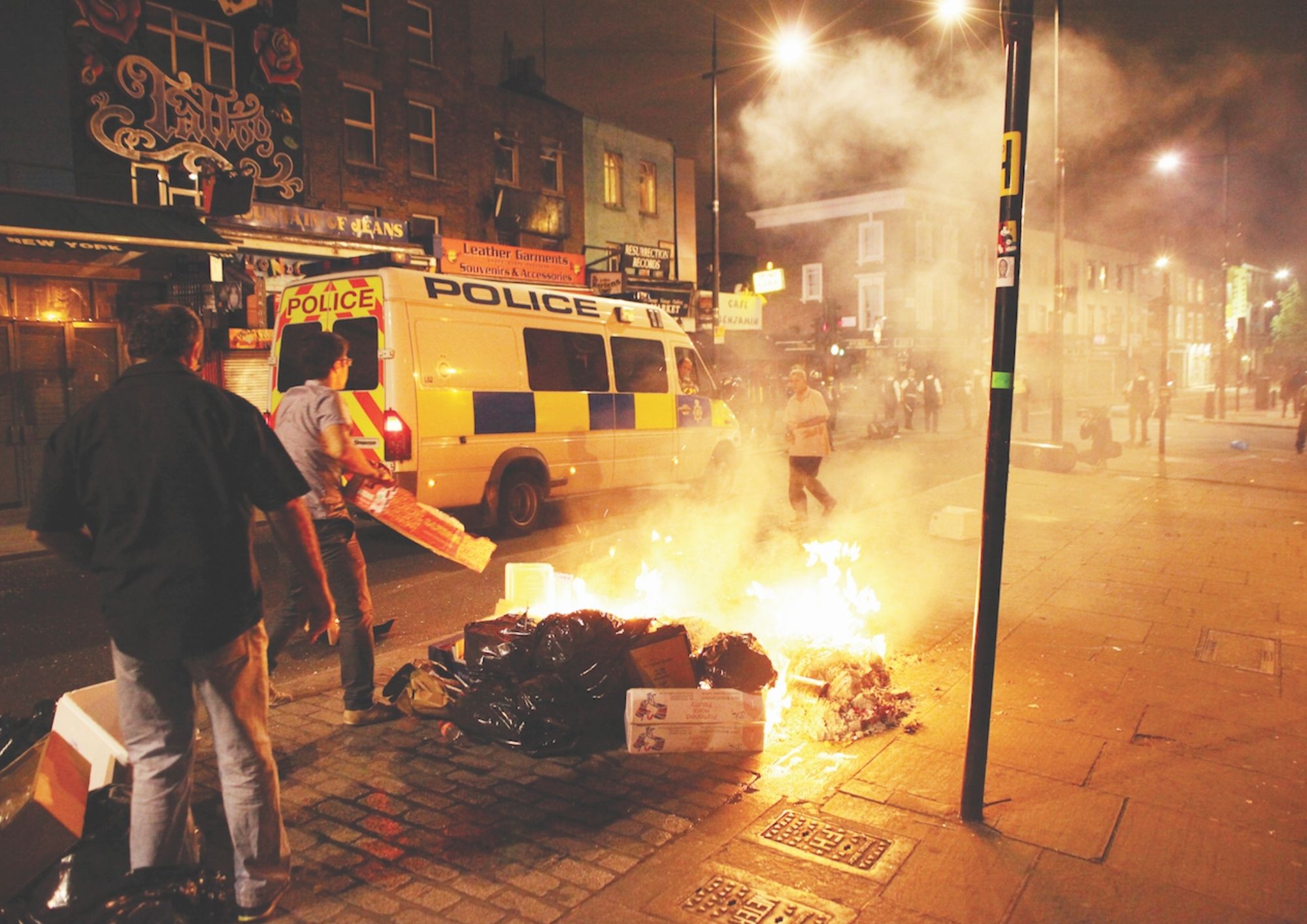 IT felt surreal at the time, and 10 years on looking back, it still does.

A “riot” was unfolding in front of our eyes, but it never really felt like we were reporting from a treacherous danger zone where our own safety was at risk.

Bottles flew, objects were thrown and refuse bins were set alight. And of course it would have felt like a very different experience for the rows of besieged police officers.

But those not in uniform simply walked on past – or stood watching, at least.

In fact, at times it was hard to decipher, who was in on it and who wasn’t. Groups of teenagers giggled from the sidelines, a preacher marched back and forth, an elderly woman shouted curse words but stumbled on through and there we were, a team of journalists live “tweeting” from the scene and taking photos of that ugly night in Camden Town. 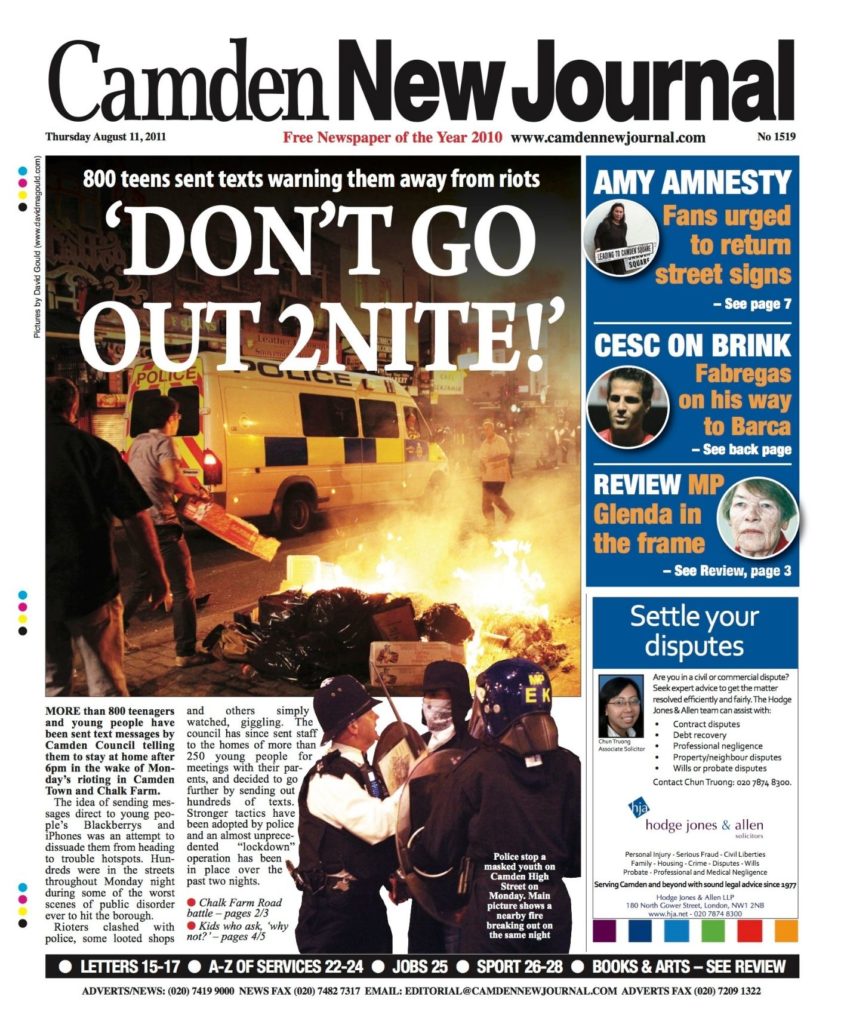 A couple of hundred people who stormed the streets here in August 2011 were not interested in us.

In fact, it remains a moot point what they were actually interested in.

While the original disorder had been sparked by the police shooting of Mark Duggan and the furious response to his death in Tottenham, the riots appeared to have changed in nature over the following few days.

It was a slowish spread to Camden and rather than emerge here as a scene of a protest, this chapter of the “London Riots” had become intertwined with or even overtaken by strategic looting.

In daylight hours, shops boarded up their front windows as if a hurricane was coming.

There was chat online about which might be the next area to be hit, and sure enough the storm eventually arrived in Chalk Farm Road and Camden High Street.

Our area did not see burning furniture shops and Camden got off lightly so to speak, compared to Haringey and Croydon – but an unprecedented pitched battle did develop.

A group of young, and let’s say youngish, people faced down rows of shield-carrying police officers, while the shops had their protective shutters peeled away. 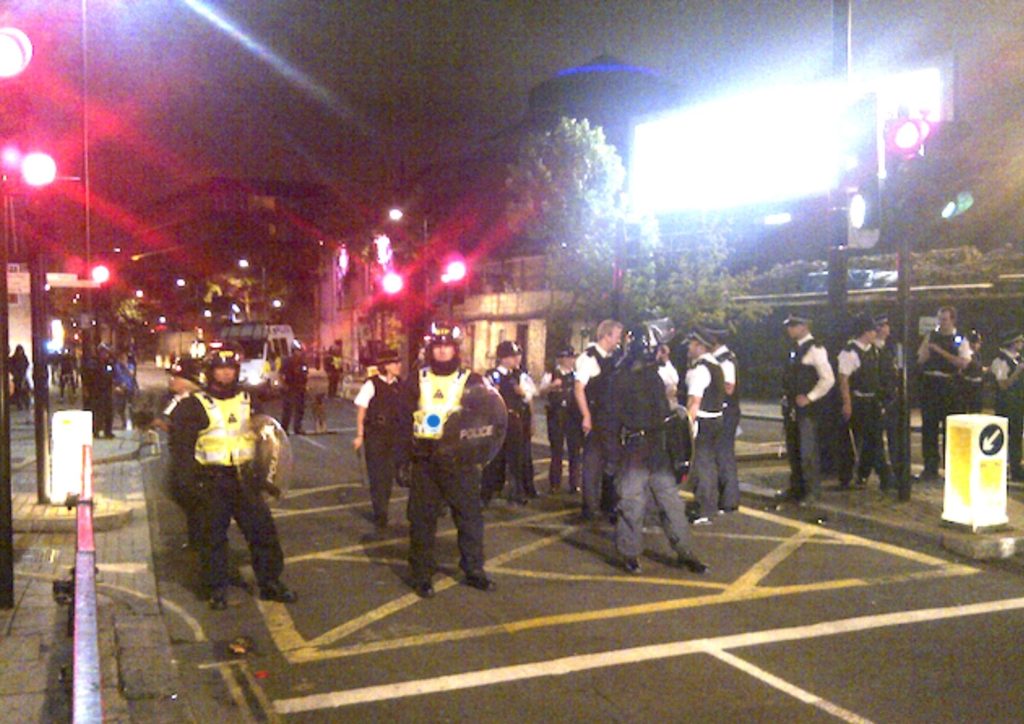 Police assemble in Chalk Farm Road and, below, some shops prepared by boarding up their windows 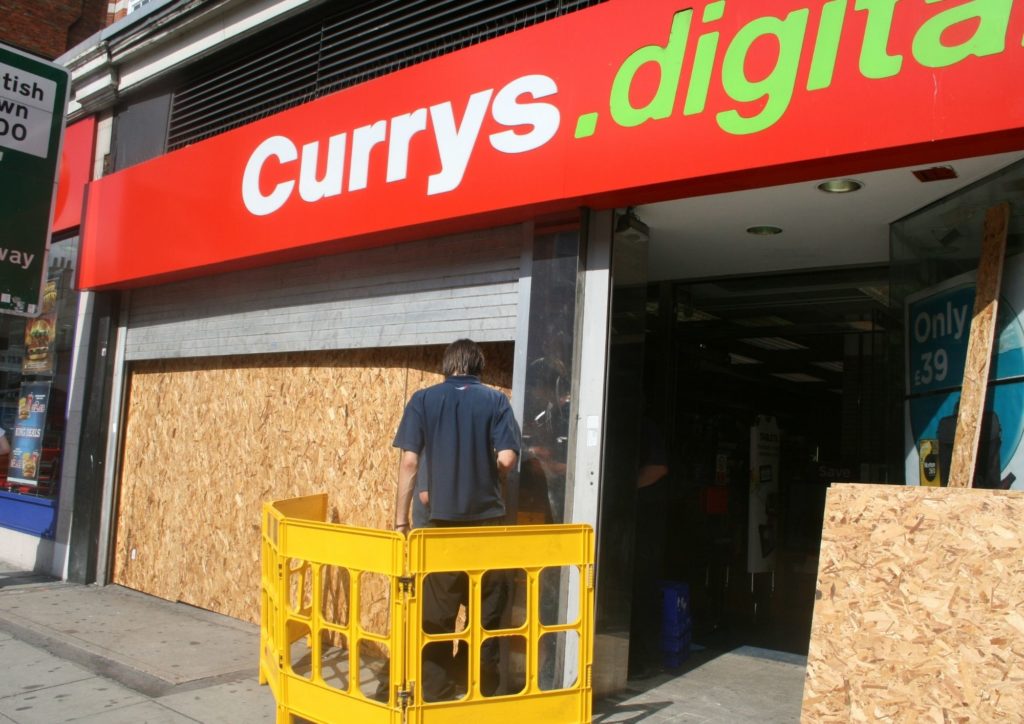 At some point, the police decided they would not intervene due to the risk of escalation.

They stood their ground in a formation, and shops – mainly mobile phone stores and expensive fashion retailers – were raided in front of them.

Bikes were taken in a sort of a trolley-dash fashion from the old Evans cycle shop; its cash tills found days afterwards on a nearby rooftop.

Eric Gordon, the New Journal’s editor until his death earlier this year, had been among the witnesses to the mayhem, watching in the street until 3am – slightly up from where we were in Chalk Farm Road.

Then 80, for many years he had expressed astonishment at the lack of public anger over the inequalities that divide our city, and he appeared almost disappointed that the event in Camden no longer seemed to be about exposing the obvious breakdown in trust between some communities and the police.

He wrote that the targets had been “mobile phone shops – and these had been carefully selected,” adding: “What I had witnessed had been a planned raid on selected shops by a gang who had come into the area from other parts of London.”

Instead of being challenged there and then, the thieves – and also those who had blindly followed friends to the scene, presumably for misguided larks – were pursued relentlessly in the months that followed.

The sentences meted out to them occasionally left human rights lawyers aghast, although many others were less sympathetic.

Hampstead and Kilburn MP Glenda Jackson suggested that water cannons should have been used and had little time for anybody who suggested this had been a fightback against a system stacked against the disadvantaged.

“You don’t shit on your own doorstep,” she said. 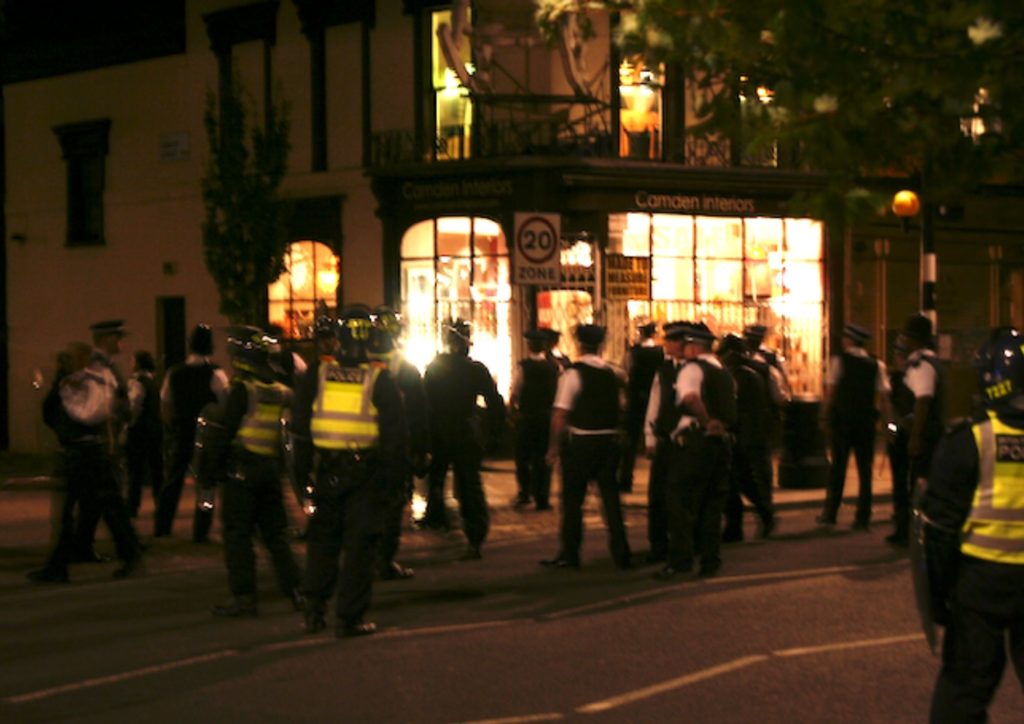 Police in Chalk Farm Road where the La1 shop was looted 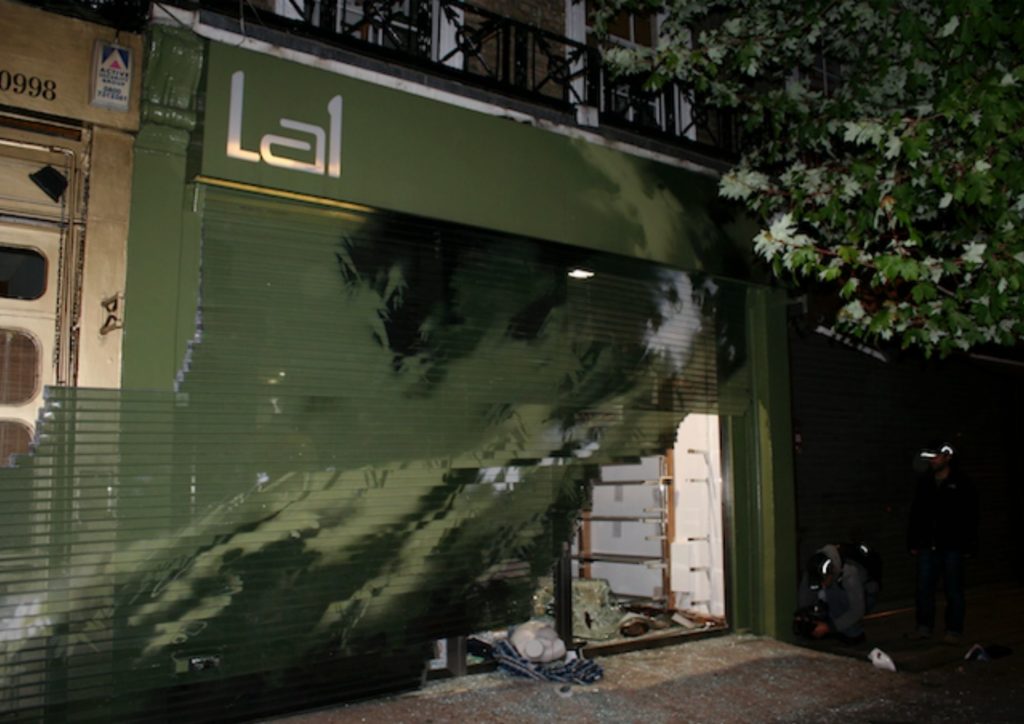 Her old Labour colleagues were nonetheless warning this week not to stand complacent about what had been behind the disorder.

The looting made the ensuing community debate complicated; in Tottenham, the anger over Mr Duggan’s death was palpable, but on the streets in Camden those involved were dismissed as “thugs” looking for an expensive new phone.

It was too complex for many to ask whether poverty or a feeling of desperation had created conditions whereby somehow looting no longer seemed outrageous to these young opportunists. 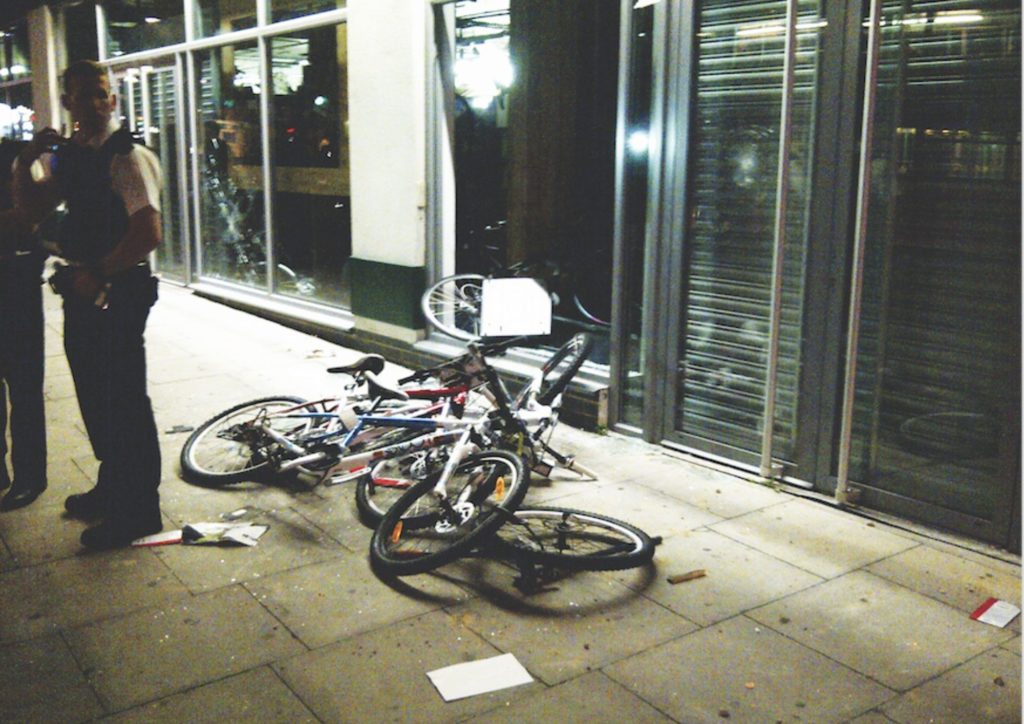 The issue of how London should be policed has persisted, however.

In the wake of George Floyd’s murder in Minnesota, an arrest unfolded in Finsbury Park last summer in which a black man cried out “get off my neck” as an officer appeared to kneel on him.

Last week, the officer was told no further action would be taken but he should take the chance to reflect on his actions.

Even the councillors in neighbouring Islington said they were disturbed that this had been the final conclusion. So multiply that feeling by 10 for those who have more contact with the police.

Ten years on, the riots in London may seem like a historic event, but don’t be fooled into thinking that base of resentment has simply gone away.