AFTER two years of studies beset by disruption from the Covid-19 pandemic, A-Level students were celebrating a record set of results in Camden on Tuesday.

The teenagers were the first cohort to have both years of Year 12 and Year 13 thrown into turmoil after the pandemic closed schools at least twice for most children, meaning thousands had to learn from home.

Yet schools, including Haverstock School in Chalk Farm, had their best set of results for at least a generation. Nationally nearly 45 per cent of entries were given A* or A grades, a sharp rise from the last time externally-set exams were held in 2019.

Pupils gathered in sixth form centres and school libraries to nervously open their results. For some, the excitement and tension was just too much. La Swap Sixth Form College – made up of Parliament Hill, William Ellis, Acland Burghley and La Sainte Union schools, was due to open its doors to their A-Level students at 9.30am – but one student slipped in early to find out how she had done.

Rochelle Koranteng-Addo beat her classmates to the school gate by a good 30 minutes, and head of sixth form Flora Wilson was happy to hand over her results.

She was delighted to find she had gained the grades needed to study biomedical science at Brunel University.

She said: “I have worked really hard and being examined, no matter what form, is stressful – but our year has done well in difficult circumstances.” 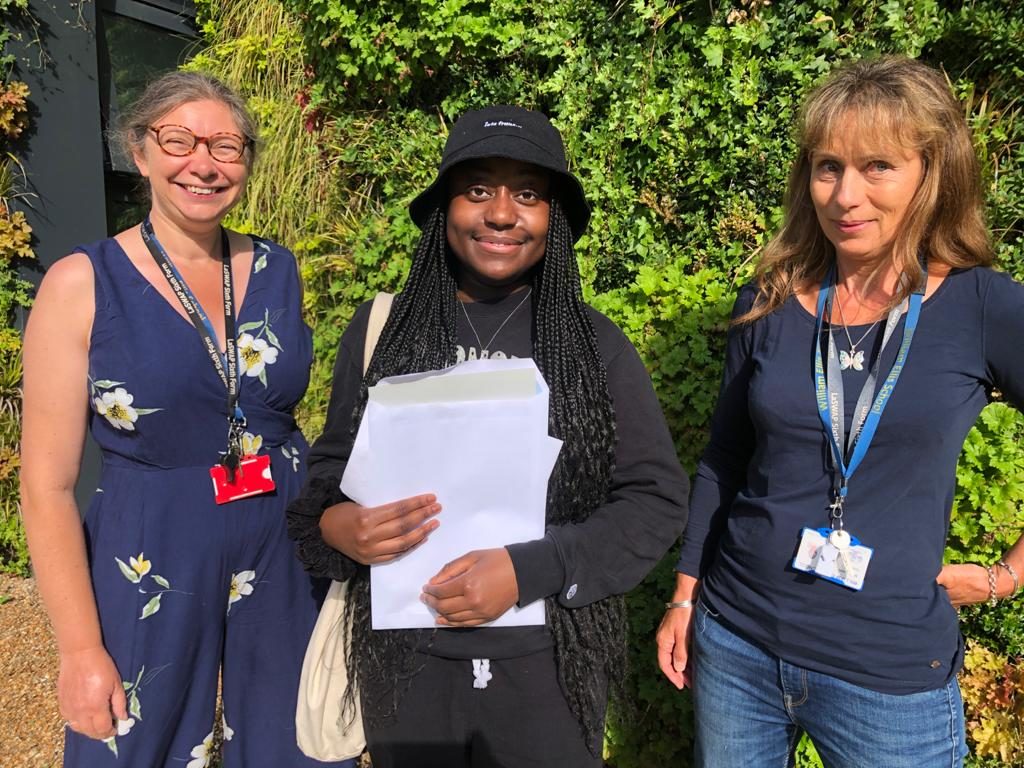 Amid the high fives and hugs at La Swap’s sixth form centre in Highgate Road, Jessie Arthur got her grades to go to Exeter University to become a marine biologist.

She said: “Doing your A-Levels during the pandemic was not the best – we missed out on a lot of experiences of being a sixth former. Getting back into school was just so good – on line learning just wasn’t the same, though it was really well managed. However, in some ways it might have helped us as students as we were required to do a lot of independent learning.”

After a government algorithm caused chaos last year, schools were given more freedom in assessing their pupils this year. Haverstock School held exams for pupils and they were moderated and checked with other schools in Camden in an attempt to ensure fairness.

Over at Haverstock School, Sagal Ali from Chalk Farm and her friend Maryama Said were both relived with their ABB grades after a tricky couple of years.

“For both of us we’ve really struggled with online teaching,” Maryama said. “We had to come in for a period last year, and we had a lot of catching up to do in Year 13.”

“It was hard to keep up with the classes sometimes, especially when you’ve got people who aren’t going to sleep until 4am,” said Sagal, who said the lockdown and home learning had interrupted the sleeping pattern and routine of many of her friends.

“Some people weren’t in the best mental state because you couldn’t see your friends and you were basically locked up,” she added.

Azmeen Rahman, 18, from Belsize Park got three A grades in Maths, Economics and Finance.

“I’m really happy, I knew I’d got those results, I was just hoping to work hard for it and it came off in the end.

“It’s been hard to concentrate 100 per cent of the time. With all of the online learning, you do what you have to do. I worked hard and focused better online, and I did more independent learning as well, because you have to take more responsibility.”

For those off to university, opinion was split over whether they would be happy to pay £9,000-a-year fees for continued remote learning. Some institutions have said they will carry on with online seminars and lectures, even after government restrictions have been lifted. Sagal, who is taking a gap year before going off to study Computer Science at Kings College London said: “I don’t do well online, and I don’t want to pay £9,000 a year to do a ‘Netflix course’.”

Leya Mukid, 18, who got AAB and is going to study Business Management at Queen Mary’s University added: “I am not paying £9,000 for a Zoom call.”

Head of sixth form at Haverstock, Katie Metselaar said concerns about so-called “grade inflation” were unfair on pupils and that they had earned their grades.

“These results are absolutely what those students would have got if they sat exams, because we made them sit exams. We didn’t inflate grades, we didn’t take into account any other class work, we simply said it is your right to sit exams and it’s a right of passage to sit exams and we’re going to give that to you in a Covid-secure way. Because what help are we giving them if we send them off from University with grade inflation and they haven’t earned those grades.”

He added: “Students have been faced with circumstances that nobody in living memory has faced and that actually to work through that challenge speaks to a lot of what this generation of kids has gone through. In many ways they’ve worked harder because for a while their education was under threat and it made them appreciate and understand the value of that, and it really spurred them on.”