A feast of festive fun and games

Take your pick from our guide to Christmas shows, pantomimes and seasonal extravaganzas 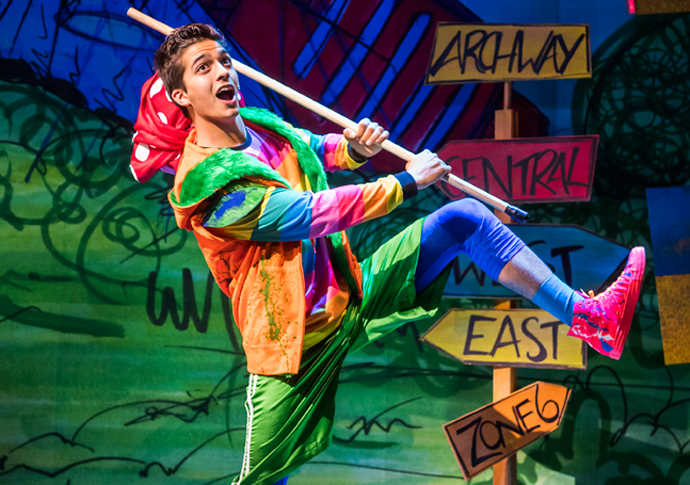 Luke Latchman in Dick-Whittington at the Lyric-Hammersmith. Photo: Tristram Kenton

From magical, enchanting classics to pun-filled, laugh-out-loud pantos, there’s something to suit every mood as you get ready for Christmas this year.

There’s a feast of shows to delight everyone from the very youngest to the oldest, including a host of whacky and extravagant pantos whether you’re a fan of the traditional tales, those with a twist or the cheeky ones full of innuendo.

If none of that tickles your fancy, or if you don’t celebrate Christmas, there are plenty of shows to choose from to brighten up the cold winter nights.

BEAUTY AND THE BEAST
Shaw Theatre, Euston Road, NW1, 0844 248 5075. Various dates and times, Dec 8-30.
The story of Beauty, a bad-mannered Prince who is transformed into a Beast to teach him a lesson and a Good Fairy who makes both their dreams come true. Ages 2+

SLEEPING BEAUTY
Theatre Royal Stratford East, Gerry Raffles Square, E15, 020 8534 0310.
Various dates and times, Dec 1-Jan 12.
Sleeping Beauty wakes from a deep sleep after a hundred years to find herself in a new city with a cruel fairy hot on her heels. All ages.

BAD CINDERELLA
The Cockpit Theatre, Gateforth St, NW8, 020 7258 2925. Wed-Sat & Tues-Sun 7.30pm Dec12-15 and 18.
An anarchic take on this traditional story where everyone wants to be a Queen and Cinderella isn’t nice anymore. Written by Christine Ellerbeck.

JACK OFF THE BEANSTALK
The Space @ Studio 88, Whitcomb St, WC2, 020 7889 1966. Various dates and times, Dec 1-Jan 5, 2019.
With a title that speaks for itself, Wiltax Productions’ show includes YouTube star Dan Armstrong in the title role, alongside characters that include Fairy Hanny and Fleshlight. 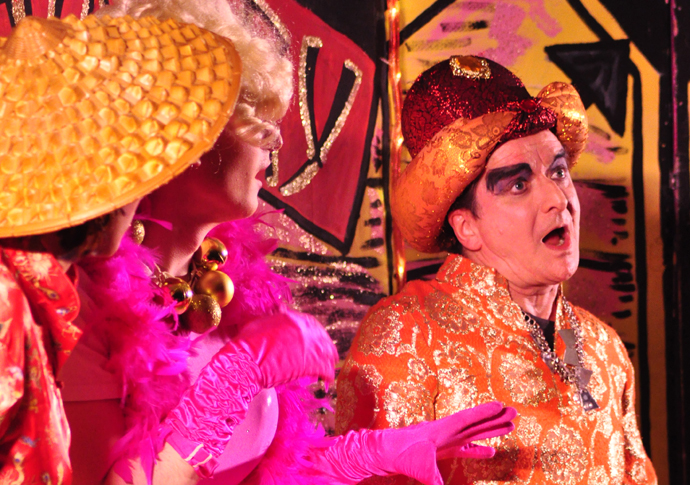 A Lad in Soho

A LAD IN SOHO
Sanctum Soho Hotel, Warwick Street, W1, 0333 666 3366. Various times, Dec 14-23.
The latest from Simon Gross, the producer behind the long-running panto Snow White and the Seven Poofs, this innuendo-filled riff on the Aladdin story has a soundtrack that includes Madonna and The Village People.

TINDERELLA
Canal Cafe Theatre, Delamere Terrace, Little Venice, W2, 020 7289 6045. Wed-Sat 7.30pm, Dec 5-29.
A saucy fairy story with a 21st century twist in which girl-meets-boy on Tindr, which leads to Ella meeting Prince Roger in Nandos, while the rapping Fairy Matchmaker is on hand to help. 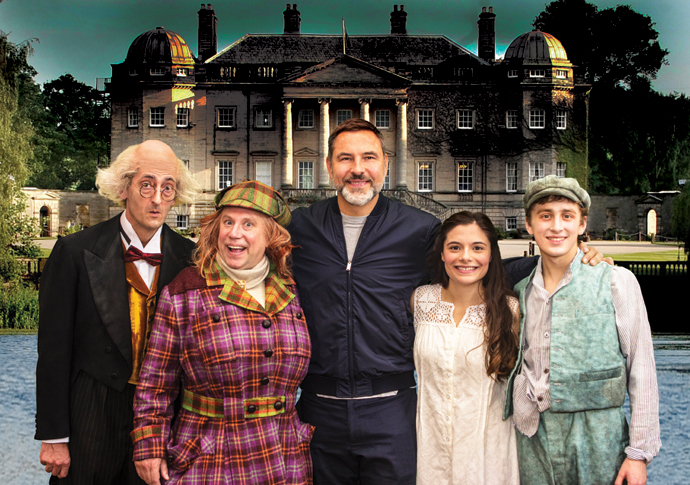 David Walliams and the cast of Awful Auntie, at the Bloomsbury Theatre

A CHRISTMAS CAROL
Rayne Theatre, Chickenshed, Chase Side, Southgate, N14, 020 8292 9222. Tue-Sun, various times, Dec 5-30.
Set in the 1930s, a retelling of the Charles Dickens’ classic story of Ebenezer Scrooge that has become a firm family favourite since it was written 175 years ago. Age 5+.

THE GOLDEN GOOSES
The Courtyard Theatre, Bowling Green Walk, N1, 0844 477 1000. Sun 2pm & 5pm, Dec 16 and Jan 20.
A Goodge Street Theatre Group production based on The Brothers Grimm story in association with the London School of Russian Language and Literature. All ages. 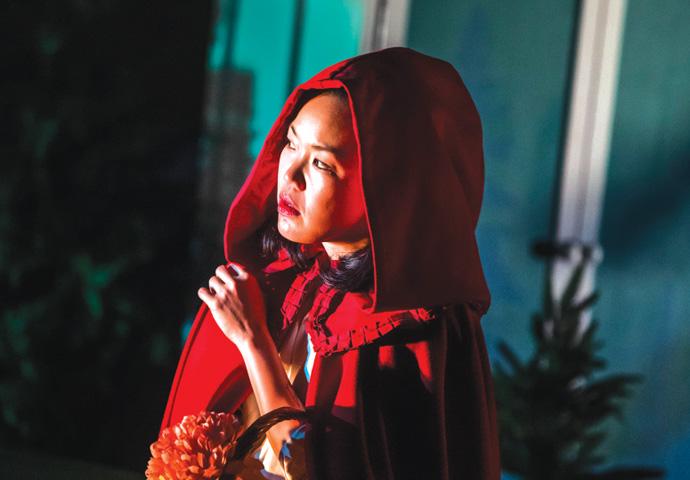 HANSEL AND GRETEL
Royal Opera House, Bow St, WC2E, 0844 871 3018. Mon-Sat, various times, Dec 11- 29.
Antony McDonald’s production pays tribute to the picture-book German landscape and to the enchanting fairytale narratives of the Brothers Grimm, an opera that has been associated with Christmas ever since it premiered in1893 in Weimar. Ages 6+

HORRIBLE CHRISTMAS
Alexandra Palace, Alexandra Palace Way, N22, 020 8365 2121. Wed-Sun, various times, Dec13- 30.
Charles Dickens and Rudolph the Red-Nosed Reindeer are enlisted to help a young boy save the day when Christmas comes under threat from a jolly man dressed in red. A new family play created by the team behind Horrible Histories. Ages 4+

NATIVITY THE MUSICAL!
Hammersmith Apollo, Queen Caroline St, W6, 0844 249 4300. Various dates and times, Dec 19-30.
Father and daughter Danny and Dani Dyer, comedian Jo Brand and West End star Simon Lipkin appear in this festival musical based on the hit film and adapted for the stage by Debbie Isitt. Children under 14 years of age must be accompanied by an adult.

SEUSSICAL THE MUSICAL
Southwark Playhouse, 77-85 Newington Causeway, SE1, 020 7407 0234. Tues-Sat 7.30pm (Tue, Sat & Sun 3pm), until Dec 29.
The Cat in the Hat and other Dr Seuss favourites, Horton the Elephant and Gertrude McFuzz appear in this Whoville production of this song and dance extra­vaganza. Co-conceived by Eric Idle of Monty Python fame. All ages.

STICK MAN
Leicester Square Theatre, 6 Leicester Place, WC2H 7BX, 020 7734 2222. Various days and times, until January 6.
Ddaptation of Julia Donaldson and Axel Scheffler’s tale of the little wooden fellow who heads off for his morning jog but gets whisked away on various misadventures as he tries to get back to his family tree for Christmas, translates brilliantly for the stage. All ages. 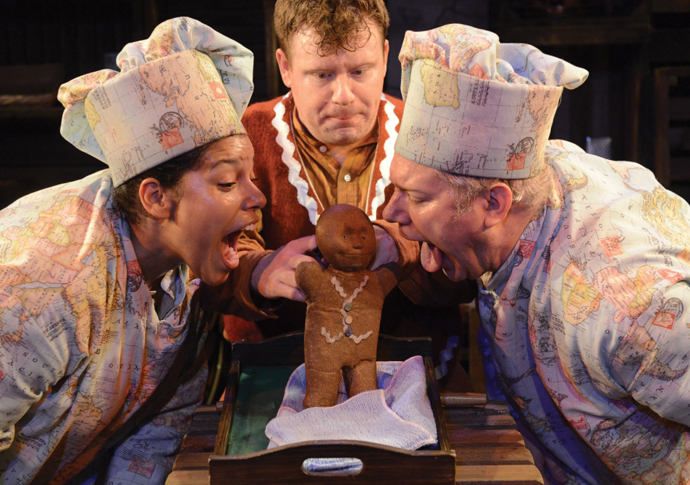 The Gingerbread Man is at Jackson’s Lane

ANGELO
Little Angel Theatre, 14 Dagmar Passage, N1, 020 7226 1787.Wed-Sun, various times, until Dec 30.
Based on the book written and illustrated by Quentin Blake, this production was first performed at the Little Angel in 1974 and has since become a popular classic. Designed by Lyndie Wright and directed by Sarah Wright. Ages 5-11.

BRAT KIDS CARNIVAL
The Spiegel Tent, Leicester Square, WC2, 03333 444 167. Wed-Fri 3pm (Sun 1pm,3pm, Sat 11am, 1pm), until Dec 30.
Hula hoops at top speed, acrobatics and mischievous clowning are all on offer at the Brief’s show, where youngsters are encouraged on stage to dance and take part. Ages 4+ 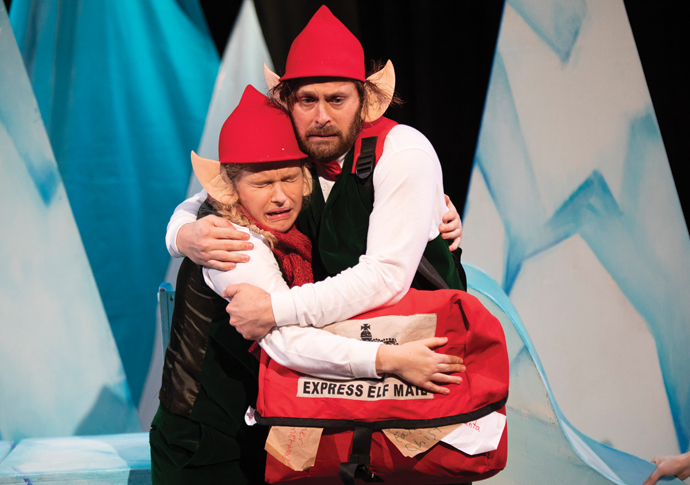 Finding Santa is at the Little Angel. Photo: Ellie Kurttz

FINDING SANTA
Little Angel Theatre, 14 Dagmar Passage, N1, 020 7226 1787.Various dates and times, until Dec 24.
When something goes wrong with the mail, how will Santa’s elves make sure all the letters for Santa Claus are delivered to him at the North Pole on time? Quirky Christmas adventure in which the audience helps decide how the story unfolds. Ages 3-8.

ROOM ON THE BROOM
Lyric Theatre, Shaftesbury Avenue, W1D, 0330 333 4812. Various dates and times, until Jan 3, 2019.
A witch and her cat go on a mission to defeat the dragon in Tall Stories’ musical adaptation of the classic picture book by Julia Donaldson and Axel Scheffler. Age 3+

THE SHOWSTOPPERS’ CHRISTMAS KIDS SHOW!
Leicester Square, WC2, 0333 344 4167. Sun 11am (Thur-Fri 1pm Dec 20-21, Sat 3pm Dec 22 & Fri 1pm, Dec 28), Dec 2-30.
Improvised Christmas play that puts children in charge as younger members of the audience are invited to shout out suggestions for what happens next, creating a show in which anything could happen. Age 6+ 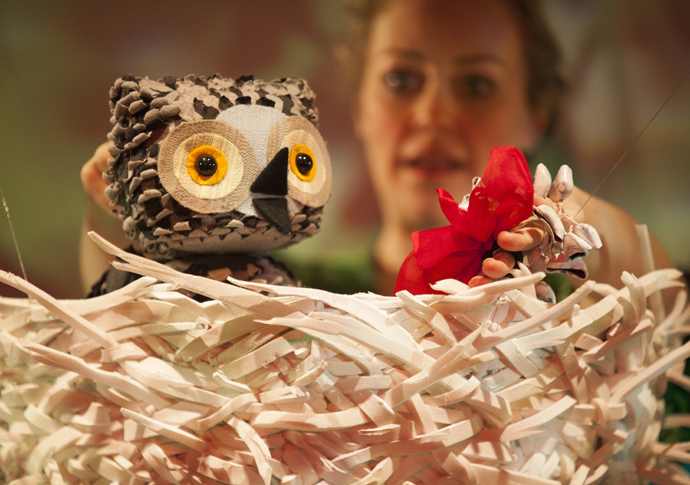 A GATSBY CHRISTMAS
The London Cabaret Club, Victoria House, Bloomsbury Square, WC1, 020 7242 0002. Various dates and times, until Dec 31.
The grand hall of the London Cabaret Club is transformed into a winter wonderland, in which the great Mr Gatsby will host one of his infamous balls.

HOW TO CATCH A KRAMPAS
Pleasance Theatre, Carpenters Mews, North Rd, N7, 020 7609 1800. Tue-Sun 7.30pm (Sat 2.30pm), until Dec 23.
Inspired by British horror greats such as The Wicker Man, drag troupe Sink the Pink’s How To Catch a Krampus tells the tale of a psychic who summons dark forces from beyond the veil. 18 +

THE NIGHT BEFORE CHRISTMAS
Southwark Playhouse, 77-85 Newington Causeway, SE1, 020 7407 0234. Tue-Sat 8pm (Tue,Sat & Sun 3.30pm), until Dec 31.
Anthony Neilson’s comedy about Gary who forgot to get his son the top-of-the-range Power Ranger figures he promised and finding the true spirit of Christmas. Ages 14+

TORI SCOTT’S VODKA IS THE REASON FOR THE SEASON
Crazy Coqs at Zedel, 20 Sherwood St, W1F, 020 7734 4888. Mon 9.15pm, Dec 10.
From her childhood obsession with The Best Little Whorehouse in Texas, to her time as a singing elf in a nursing home, New York City’s Tori Scott weaves a festive tale that celebrates what is truly magical about this time of year.

BURKE AND HARE
Jermyn Street Theatre, 16b Jermyn St, SW1, 020 7287 2875. Tues- Sat 7.30pm (Sat & Sun 3.30pm), until Dec 21.
A song-filled, vaudeville-style comedy directed by Abigail Pickard Price that tells the story of William Burke and William Hare who scandalised Edinburgh in the 1820s with their murderous trade in selling dead bodies to the medical trade.

THE CRUMPLE ZONE
King’s Head, 115 Upper St, N1, 020 7478 0160. Tues-Sat 9.15pm (Sun 5.15pm), until Dec 9.
Written by Buddy Thomas and directed by Robert McWhir, a comedy in which the action takes place in a Staten Island apartment over the Christmas holiday season when four friends and a mystery visitor find themselves together.

The Parentheticals: Merry Questmas at the Etcetera Theatre 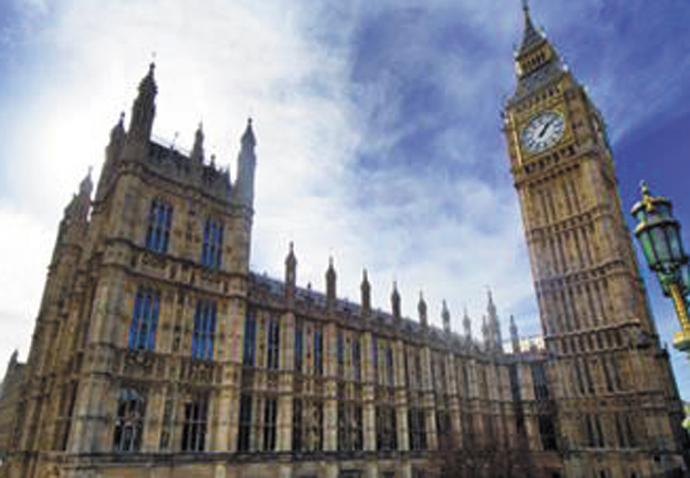 Why is the Queen banned from the House of Commons? And where did Guy Fawkes hide before trying to blow up Parliament? There’s a world of history to be discovered behind the scenes at the Palace of Westminster which runs Family guided tours ideal for young children. They last 60 minutes and are free to under15s (adults £18.50/£16). Upcoming family guided tours take place from Wednesday to Friday between December 27 and January 4. Book online, call 020 7219 4114, or visit the ticket office at the front of Portcullis House, on Victoria Embankment, www.parliament.uk/visiting/ 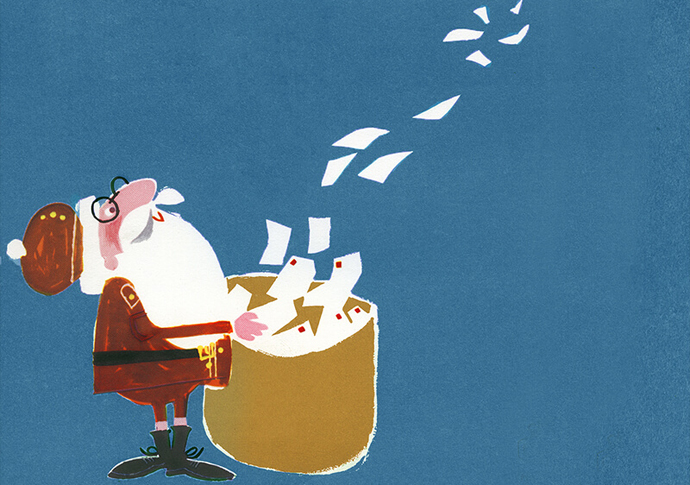 THE POSTAL MUSEUM
The Postal Museum is running special Yuletide activities for children of all ages spanning arts, crafts and artist-led workshops, from decorating a pair of Christmas socks to designing seasonal stationery. And the subterranean Mail Rail Ride is getting a makeover, with special projections – wartime wives wishing husbands Merry Christmas, and the first King’s Speech on the BBC. Check the website for details. The Postal Museum, 15-20 Phoenix Place, WC1X 0DA, open daily except December 24-26, 10am-5pm, 0300 0300 700, www.postalmuseum.org 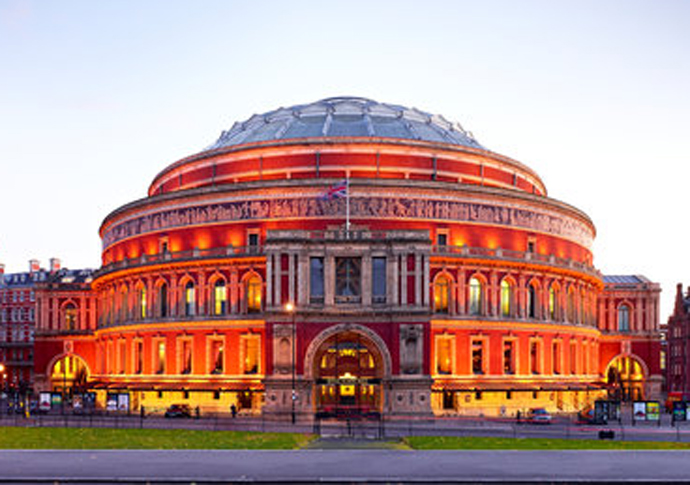 ROYAL ALBERT HALL
At the Royal Albert Hall there’s quite a line-up of festive offerings with something to suit all the family. Choose from A Christmas Carol live recital (December 5); Charlie Brown’s Christmas with live jazz (December 14); The Snowman and Paddington Bear live in concert (December 20); Michael Rosen reading Bah! Humbug! (December 20) and the Whose Line is it Anyway 30th anniversary show (December 15). And there’s much, much more. Check the website: www.royalalberthall.com/
christmas-at-the-royal-albert-hall/

HOLIDAY ON ICE: Get your skates on! 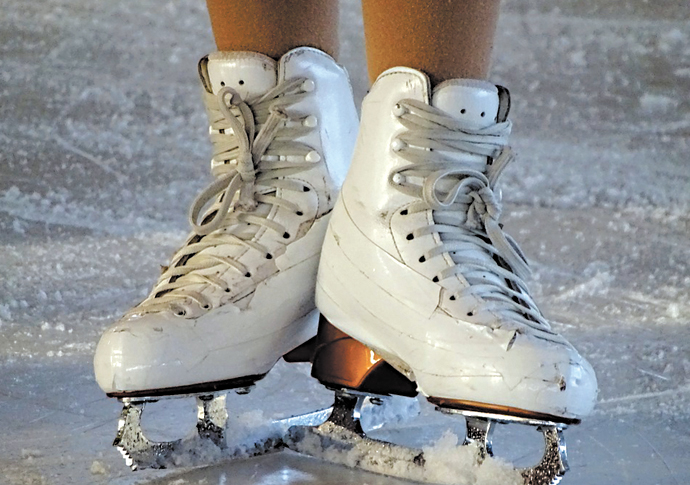 JW3 ON ICE
Open December 2-January 6 (open December 25 and 26). The ice rink is suitable for children 2 years and older. Sessions last 50 minutes. You can pre-book a penguin stabiliser, and there are also seated banana toboggans for little ones to join in the fun.W3’s Zest café is open to all visitors (including non-skaters), with hot choco­late, mulled wine and tasty food. Adults £13/under-15s £8.
Jewish Community Centre, 341-351 Finchley Road, NW3 6ET, 020 7433 8988, www.jw3.org.uk/icerink
TOWER OF LONDON
Until January 6. Skate beside this iconic historic landmark, floodlit at night for extra festive atmosphere. EC3N 4AB. Tickets £14.50 adult/£12.50 13-15s/£10.50 3-12s. Spectators free. Prebook at https://toweroflondon­icerink.co.uk/information/tower-skate-book-now/
HYDE PARK WINTER WONDERLAND
Until January 6. It’s the largest open air ice rink in the UK, set around the Victorian bandstand – all part of the seasonal spectacle in the park. Ice skating tickets from £9.50 adult/ £7.50 child. Rangers Lodge, W2 2UH. www.hydepark­winterwonderland.com