A celebration of the hair of the dog

It was hard work, but somebody had to do it – a new book takes as its subject pooches in pubs 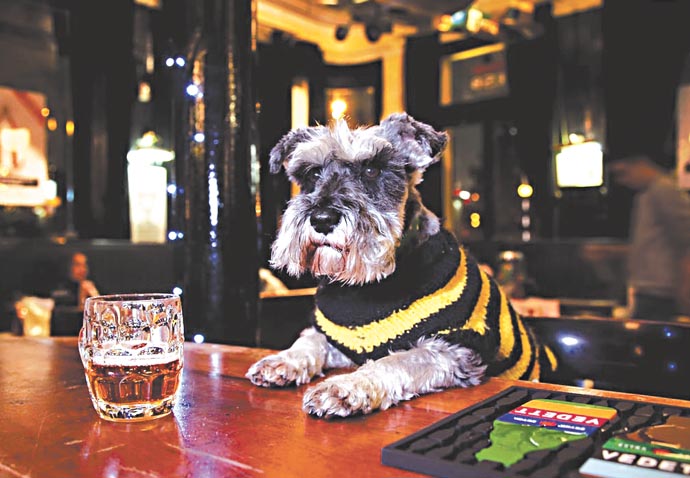 Pearl, the late resident of the Rosemary Branch in Shepperton Road

A CHANCE encounter with an English bull terrier wearing a scarlet neckerchief in an Angel boozer gave dog lovers Abbie Lucas and Paul Fleckney an idea.

After meeting Mascha, the former resident pooch at the Charles Lamb, the pair decided to embark on a journey across the country to discover the wonderful variety of Britain’s pub-dwelling dogs.

“We were just sat in the pub and Mascha wandered by, looking as if she owned the place. Someone said a book of pub dogs would make a good book. We wrote it off as pub talk at first but me and Abbie thought there might be something in it,” said Paul.

For years their idea was turned down by publishers until Little, Brown picked it up.

Despite visiting more than 70 pubs, photographer Abbie and journalist Paul, who were living in Angel at the time, didn’t have to travel far to find some firm favourites.

Described as “cheeky, smiley and flirty” by owner and landlord Wesley Deaton, Buster functions almost as a community dog, with regulars taking him for walks and nearby children taking him for play sessions in their gardens. 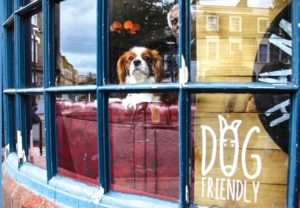 Buster – a huge favourite at The Alma in Newington Green Road

Despite his unusual habit of stealing socks, Mr Deaton said: “If someone offered me £1million for him tomorrow, I wouldn’t take it.”

Described as “obstinate” in the book, Pearl was a miniature schnauzer known locally for her bee-stripe jumpers. She died earlier this year.

Toby Vaudrey, of the pub, said: “She was a little bit picky and she got her own way but she was a very loving dog.

“She ran the place with Lucie [former boss Lucie Marshall] as her assistant.”

Paul, who doesn’t yet own a dog, said: “Pearl was one of the first dogs we photographed in 2010, when she was just six months old. We then went back to get some more just a month before she died.”

He added: “We had great fun doing the book. It was basically just an elaborate ploy to hang out with loads of dogs.

“I think what they show is that the pubs which really make an effort to be part of the community, being welcoming and friendly, that it really pays dividends.

“People still really value pubs as community assets and dogs are such a great way of adding huge value.

“I’ll definitely get a dog one day – it’s just that now I have about 40 breeds to choose from!”

• Great British Pub Dogs by Abbie Lucas and Paul Fleckney is published by Robinson and is out now, £12.99.